Breaking news from Austin, the region, and beyond 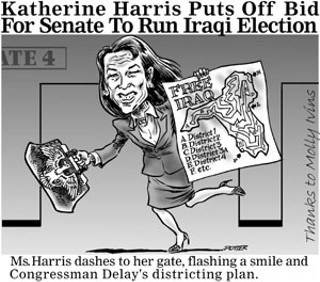 Quote of the Week: "I just think he has the best chance of beating George Bush, and that's what we're here for, right?" -- John Kerry supporter Tim Broderick in an Iowa caucus Monday night, as his candidate was about to become "Comeback Kerry."

President Bush delivered his State of the Union address Tuesday night, coming out strongly against terrorism, taxes, steroids, and gay marriage -- only the latter may require a constitutional amendment.

The U.S. Supreme Court declined to issue a stay of the new Texas congressional map, and filings closed for March primaries likely to remake the delegation in the image of Tom DeLay. See "Here's Your Congress!."

State District Judge Brenda Kennedy accepted the defense motion and the prosecution's acquiescence and quashed the indictment of APD Officer Scott Glasgow for indirect responsibility in the shooting death of Jessie Lee Owens. See "Glasgow: An Agreement to Quash."

The U.S. Supreme Court ruled unanimously that a 1998 consent decree agreement to provide preventative care to children covered by federal Medicaid is binding on the state of Texas, which had claimed sovereign immunity. See "Suffer the Little Children."

Cypress Realty's efforts to develop the old Rutherford Ranch in Hays Co. hit an unexpected roadblock last week with the Barton Springs/Edwards Aquifer Conservation District's decision to delay a hearing and possible action on a requested well-drilling permit. The BSEACD board will take up the matter again on Jan. 29. The Save Our Springs Alliance requested the delay in registering its opposition to the permit. The permit application, which appeared among the public notices of the Hays Free Press on Jan. 8, took many by surprise. In its 2001 development agreement with the city of Dripping Springs, Cypress stated the mixed-use residential and retail development would rely on surface water instead of ground water pumped from the aquifer. Opponents point to the location of the proposed well on the Cypress site plan -- it's surrounded by a vast golf course -- as the basis for their concern. -- Amy Smith

On Jan. 15, three men were charged with burglary and theft in connection with nearly 80 burglaries in Northwest Austin. Police initiated operation "Without a Trace" in May 2003 after Northwest Area Command detectives and district representatives discovered a pattern of daytime burglaries at a Northwest apartment complex. In August, police noticed the same pattern of burglaries at a second complex -- in each case, burglars picked door locks to get inside the apartments. Police identified three suspects -- Octavio Sims, 31, and Cody Cochran and Bruce Larson, both 25 -- whom they believe are responsible for the burglaries, but APD officials believe additional suspects were also involved. Searches have netted a cache of stolen property -- including 12 handguns, two assault rifles, and numerous pieces of jewelry. Northwest area detectives are currently pursuing additional leads that they hope will lead to the recovery of even more of the stolen property. Anyone who thinks he or she may have purchased stolen property from Larson, Sims, or Cochran is asked to call the APD at 974-5584. -- Jordan Smith

The University of Texas' Task Force on Racial Respect and Fairness, a 15-member panel convened by UT President Larry Faulkner last March, has issued a wide-ranging report recommending creation of a "vice president for diversity and equity" position, new programs and initiatives to enhance relationships between students and university police, and renewed emphasis on recruiting underrepresented students, faculty, and staff. Among the recommendations: UT should encourage incoming students to postpone pledging to Greek organizations until the end of their freshman year "to allow them an opportunity to develop a broader range of experiences and contacts that may otherwise be limited by their participation in fraternities or sororities." The group, composed of UT students, faculty, and staff, also advocated curricular changes, including a required course on "a non-U.S. culture, a sub-national ethno-racial culture of the U.S., or a course that explores issues related to gender, race, and class." -- Lee Nichols

On Jan. 20, the trial for alleged members of the notorious prison-related gang the Texas Syndicate began in federal district court. The three defendants, all Austin residents, are charged with conspiracy to deal cocaine and conspiracy to violate the federal Racketeer Influenced and Corrupt Organizations Act, or RICO. The three men were among 19 suspected TS members indicted last year and accused of a host of crimes including murder, robbery, and obstruction of justice; 16 other defendants have already pled guilty to the charges against them. The terms of the 16 plea arrangements remain sealed under order from U.S. District Judge Sam Sparks. -- J.S.

Just three days before the Iowa caucuses, former Texas Gov. Ann Richards endorsed Howard Dean for president. Richards, appearing on CNN's Larry King Live, said, "I admired particularly that he got health care in Vermont for everybody -- that 99 percent of the children of Vermont are eligible for health care. That's what we ought to be having for the whole United States, and we need somebody to do it." The announcement will surely carry some weight with Texas Democrats, but Iowans weren't swayed -- Dean wound up a disappointed third, behind Sens. John Kerry and John Edwards. (And apparently no one took heed of the precaucus Dean endorsement -- announced Monday -- from Austin City Council Member Daryl Slusher, which we presume will only affect an area somewhere between the Texicalli Grille and Quackenbush's Coffeehouse.) -- L.N.

On Tuesday, Travis Co. commissioners approved a plan that will allow Travis Co. Sheriff Margo Frasier to place 15 additional deputies on patrol. Frasier will move 11 deputies from other assignments -- four currently assigned to the Drug Abuse Resistance Education program in county public schools and seven currently working at the Del Valle Jail -- and will spend part of $500,000 to hire four new deputies. The balance of the money will be used to pay for new cars and other patrol-related equipment. -- J.S.

On Jan. 16, Williamson Co. Visiting District Judge Don Humble declared a mistrial in the sex and age discrimination case against Williamson Co. Attorney Gene Taylor, after jurors failed to reach a verdict after two days of deliberation. Attorney Carol Collins, 54, a 14-year veteran of the county attorney's office, had filed suit against Taylor claiming she was fired from her job in 2000 as a result of age and sex discrimination. She's seeking $392,000 in back pay and attorney fees. The case went to the jury on Jan. 13, but after two days of deliberation, the seven-woman, five-man jury was unable to reach a 10-2 majority needed to render a verdict. At press time, no retrial date had been set. -- J.S.

The League of Women Voters of the Austin Area hosts its annual State of the City address on Wednesday, Jan. 28, 6-8:30pm, at the Austin Woman's Club, 708 San Antonio. Admission is $35, and the evening includes a reception, dinner, and wine. The address will be delivered by Mayor Will Wynn, with an introduction by Arnold Garcia Jr., editorial page editor of the Austin American-Statesman. Given that the Save Our Springs Alliance recently caught Wynn and Garcia colluding, via e-mail, to keep Temple-Inland's plans to expand over the Edwards Aquifer under wraps, we trust the intro will be as glowingly complimentary as the wine. -- L.N.

Former Virginia Gov. Douglas Wilder, the nation's first African-American governor since Reconstruction, will be the keynote speaker at Educating for a Diverse America: A Summit and Symposium, Jan. 29-30 on the UT campus. The event is one of several on campus commemorating the 50th anniversary of the Brown v. Board of Education Supreme Court decision desegregating America's schools. Wilder's keynote address will be Thursday, Jan. 29, 9-10am, in the LBJ Auditorium inside the LBJ Library at 26th and Red River. That will be followed by a full slate of activities, including a summit Q&A session with the presidents of UT-Austin, UC-Berkeley, the University of Michigan, Arizona State, UNC-Chapel Hill, UT-El Paso, and Prairie View A&M. For more info and a full schedule, see www.utexas.edu/president/diversity or call 471-1232.