Glasgow: An Agreement to Quash

The Glasgow-Owens police shooting case is thrown out of court, while many questions remain unanswered

At the close of a one-hour court hearing on Jan. 15, state District Judge Brenda Kennedy threw out the criminal indictment of Austin Police Officer Scott Glasgow. "I am going to grant the defense motion to quash at this time and discharge the defendant," Kennedy ruled. "You are free to go, sir," she told Glasgow.

The ruling came after Glasgow's attorney Travis Williamson argued that the indictment, charging Glasgow with criminally negligent homicide in the shooting death of 20-year-old Jessie Lee Owens, was legally inadequate -- an assessment shared by the Travis Co. District Attorney's Office, Assistant DA Gary Cobb told the court. Cobb said the DA's office sought advice from numerous sources -- including other district attorneys, defense lawyers, and UT law professors -- searching for "any adequate argument for upholding the indictment. We found none." The duty of the district attorney "in every case is to see that justice is done," Cobb concluded. "Our legal duty requires that we offer no legal objection to the defense motion to quash the indictment."

Glasgow was indicted on Oct. 20 in connection with the late-night shooting death of Owens last summer on Tillery Street in East Austin. According to the APD, Glasgow was on patrol near 12th and Airport shortly after midnight on June 14. For unexplained reasons, Glasgow noticed the Dodge Neon that Owens was driving, called in the car's license number, and was told (incorrectly) that the car was reported stolen. Glasgow requested backup and followed Owens to Tillery, where Owens pulled over and Glasgow pulled up next to him. Glasgow approached Owens, his gun drawn, and tried to get Owens to get out of the car, leaning over the partially opened door in an attempt to remove the keys from the ignition. Owens allegedly accelerated, and Glasgow somehow got his arm, pistol drawn, stuck inside the car. Fearing for his life, Glasgow fired his pistol five times, killing Owens. The car came to a rest on a neighboring lawn.

Many Austinites, particularly in the African-American community, have found the official story unsatisfactory and decried the shooting as a callous murder of a black youth by a white police officer.

A Travis Co. grand jury considered the case for nearly 90 days before issuing an indictment -- the first time an Austin officer had ever been indicted for an on-duty shooting. But the language of the indictment was unusually circumspect, as the jurors sought to hold Glasgow liable for Owens' death not directly because of the shooting, but based on a list of procedural violations -- such as parking his car too close to Owens', failing to turn on his emergency lights, and failing to wait for backup before approaching the car. (For more on the case, see "Something Went Wrong," Dec. 12, 2003.)

Williamson argued that the indictment was "fundamentally defective" in failing to specify what exactly Glasgow was alleged to have done that caused Owens' death. "What is the causation?" he asked. "We know that there is a car involved, and we know a firearm is involved, but we do not know, from the fact of the indictment, how the vehicle came into play in this or how a firearm came into play." The indictment fails to provide Glasgow with "proper notice" of the crime, he argued, so that he can mount a "proper defense."

Similarly, Williamson argued, Glasgow cannot be held responsible for things he did not do -- such as waiting for a backup unit to arrive before approaching Owens. "A failure to do something never rises to the level of criminal conduct in Texas unless a statute imposes a duty," Williamson said, and there is no such statute.

After the hearing, an emotional Glasgow, apparently near tears, publicly addressed reporters for the first time since the shooting. "I'd like to say that it is still sinking in, but my family and I are elated," he said. "The court has righted a wrong." Ron DeLord, president of the Combined Law Enforcement Agencies of Texas, agreed. "That was a political indictment, and it never was a factual indictment," he said. "If you truly believe that training is an issue [in this case] or that [Glasgow's] actions were impulsive, that is a civil action. You cannot indict a police officer for shooting someone when they have the right to defend themselves. Here you have a runaway grand jury using the process to make a political statement, and that is not proper."

The court's ruling disappointed Owens' family. "But it is important that we allow the justice system to run its course," said family spokesman Bob Mann. "And they are still seeking federal intervention." Last fall, Owens' great-aunt Hazel Obey, a grand dame of local Democratic politics, said that the family has asked investigators from the U.S. Attorney's Office in San Antonio to investigate the grand jury proceedings to determine if either District Attorney Ronnie Earle or APD Chief Stan Knee might have exercised any improper influence on the proceedings. "They may get others involved," Mann said.

Late Friday, the DA's office released the forensic report of a crime scene reconstruction expert hired to review the case, partly at the request of Owens' family. The report, by Tom Bevel of TBI LLC, an Oklahoma-based forensic education and consulting company, concludes that Glasgow's version of the incident is accurate.

The department's Internal Affairs investigation into the shooting is ongoing. Knee has until mid-February to decide whether Glasgow will receive any departmental discipline. 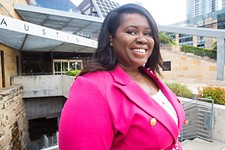 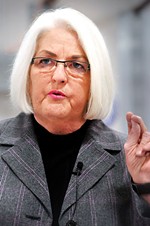