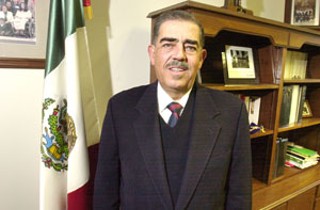 On a soggy morning last week, the steady beat of rain represented a mixed blessing for hundreds of construction workers from Mexico. The weather cost them a day's work in wages, but it also offered a rare opportunity to take care of important business at the Mexican consul general's office, where by midmorning the foyer was packed with people clutching paperwork and filling out forms.

An unsuspecting visitor might not immediately connect the dots between inclement weather and the unusually heavy crowd gathered at the consulate. "It is raining today," the consul general, Francisco Javier Alejo, explained. "They cannot work when it is raining, so they come here to get documentation." The documents they seek range from birth certificates for their newborns to identification cards for themselves; the matricula consular, as it is called, is what the Mexican government issues to identify its citizens living in other countries.

These citizens are among hundreds of thousands of workers who might one day be given temporary U.S. residency as part of President Bush's new proposal that Congress enact a law creating a three-year guest worker program for eligible immigrants. The Bush plan, short on details but long on potential political mileage in an election year, is generally getting a warm yet cautious reception from many moderates and liberals. It's catching flak from conservatives like U.S. Rep. Lamar Smith, R-San Antonio, who predicts such a program would further rob American workers of honest wages and jobs. However, even Bush has pointed out that these hardscrabble jobs are not exactly the most sought-after by U.S. citizens.

Alejo echoes the opinion of his boss -- President Vicente Fox -- who has endorsed the proposal. "It is a conceptual framework, for the time being," Alejo said, sitting in the new, more spacious consulate quarters that Fox inaugurated on his visit here in November. "We think this is a positive move, although it is not, of course, what we would like to see, which is the legalization of people who are already here. This is normally called amnesty," the consul general added. "I would prefer to call it legalization."

Alejo noted that the labor demand for workers from Mexico and other countries far exceeds the number of visas issued. "It's a very clear reflection of a mismatch." Still, he said, "It is not surprising that so many conservatives are so bitterly opposed to the plan. Employers of course will have to pay better wages, fringe benefits, Social Security, and will have to adopt safety measures."

That's not all that employers will be responsible for under the new law. Austin immigration lawyer Nina Fantl points out that the burden will be on the employer to show there are no U.S. workers available to fill the jobs, which could be a very complicated process. "Bush is trying to avoid the appearance of amnesty," she said, "but ultimately I think the ones who are going to get the job offers are the ones who are already here. I personally would prefer a policy that would recognize the people who have been here working hard and complying with our laws."

Henry Cruz, staff attorney for the Political Asylum Project of Austin, says the immediate reaction from the immigrant community was one of misunderstanding. "A lot of people ... were excited because they thought the law was already in effect," he said. "Of course," he added, "there is a lot of skepticism, too. Some people would prefer not to go that route [of a three-year guest-worker program], and they're thinking they'll just take their chances." For the most part, though, he said the client base at PAPA, a nonprofit group providing legal services to immigrants and asylum seekers, is heartened by the proposal. "When they come to us with questions," Cruz said, "there is hope in their eyes and optimism in their voices."

In South Austin, the clients of El Buen Samaritano, a nonprofit serving low-income Spanish-speaking immigrants, see the proposal as a way out of the isolation they feel as second-class citizens. "At least this is something that will buy them some time and give them an opportunity to participate in our society," says the Rev. Ed Gomez, the executive director.

But Eliza May, executive director of the Hispanic Chamber of Commerce, says she's hearing skepticism from Mexican workers here, who make up more than 65% of Travis Co.'s immigrant population. "They don't trust their own government, and they bring that sense of mistrust to our environment," she said. "What we're hearing is that many of them are saying, 'Why should I expose myself and potentially cause a tracking method for the government to come after me in three years?'" Like a lot of other people, May also wonders why Bush is proposing only a temporary solution to otherwise law-abiding workers. Granting legal status would serve both the worker and the employer, she said. "Every time a business hires one of these individuals they run the risk of being fined, and if there is one thing that businesses dread, it's government interference."