Heat Still on Temple-Inland and Council 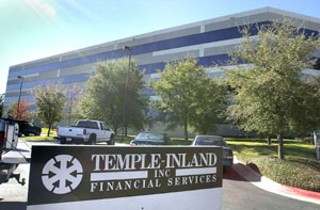 Environmentalists continued lobbing balls into Temple-Inland's court this week. On Tuesday, seven green leaders signed a letter to CEO Kenneth Jastrow II asking him to steer the company's expansion plans out of the Barton Springs Recharge Zone. The letter encouraged him to keep the company -- and the jobs -- within Austin's city limits.

Activists have also called on city officials to "assist" Temple-Inland in expanding away from its current site at MoPac and Barton Skyway, where the existing corporate headquarters were built in compliance with the SOS Ordinance. The company would need six votes from the City Council to get a variance that would allow for the expansion on MoPac.

During more prosperous times, the city awarded several millions in incentives to keep Computer Sciences Corp. and Intel Corp. from expanding over the aquifer. CSC built its new offices on West Cesar Chavez (although much of the space currently sits empty), but Intel pulled out of its Downtown site before finishing its multistory shell of a building. By contrast, Temple-Inland has tentatively offered an incentive of $1 million if the city allows the company to expand at its present location. Temple-Inland has hired architect Matt Kreisle of Page Southerland Page for the project.

Mayor Will Wynn said that in discussions with Temple-Inland, he has broached the issue of relocating off the aquifer, "but it continues to seem impractical." "Obviously," he added, "I wouldn't have asked the city manager to analyze a potential mitigation plan if I hadn't already seriously discussed the topic of relocation with Temple-Inland."

If any progress in negotiations has been made between city officials and Temple-Inland, Council Member Brewster McCracken says he isn't aware of it. "We have not received even a single briefing on this in executive session," he said. "And my understanding is that no formal proposal has been made." He added that a Temple-Inland attorney gave him a briefing on the company's plans. If T-I is allowed to move forward on its expansion, McCracken said, "I would want them to provide more environmental protection than what's already in place."

This week local activists were questioning those current protections, charging that during last week's heavy rains, a sprinkler system intended to percolate polluted runoff through the groundcover -- rather than have it pour directly into Barton Creek tributaries -- badly malfunctioned. 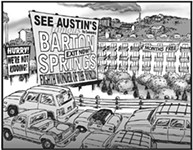