Garden Terrace is a deceptively simple step off the streets A modest-sized room, with private bath and kitchenette, in a renovated nursing home on the southern edge of town is not by any standard palatial. But luxury is a relative concept. Ask Garden Terrace resident Mardi VanEgdom. "I was living in a renovated school bus in someone's back yard," she says. "It was a real interesting lifestyle. I had some roommates, mostly wasps. But compared to the people on the streets, I felt like I had it good."

VanEgdom's fellow resident Allan Haskell echoes her sentiment. He moved to Garden Terrace, which opened its doors in October, from a boarding house ("not a nice place, and not nice people") that was a tenuous step up from the street. "The boarding house was just a place to exist," he says. "This is a place where we can live."

Really, that's all Garden Terrace is -- a place to live. And it's a testament to the worn, torn state of the safety net, and to the dysfunction of the local housing market, that Garden Terrace is unique and innovative and desperately needed, and that it took its developers -- Foundation Communities Inc. and the Capitol Area Homeless Alliance -- nearly three years to assemble $4.5 million in scarce funding, find a suitable location, and bring to market something as simple as Garden Terrace. "It sounds silly to say it," says CAHA Executive Director Helen Varty, "but everybody's starting to realize that one way to stop homelessness is to give people a home. It really works."

Garden Terrace, at William Cannon and Emerald Forest, is Austin's only permanent "supportive housing" facility for homeless or low-income single adults. Of Garden Terrace's 85 units, 50 are reserved for those transitioning from homelessness. Rents range from $50 to $300 or one-third of residents' income, which must be 50% or less of Austin's median income of $24,900 for a single adult. The median is about $12 an hour for full-time work -- but more than one-third of Austin jobs pay less than $10 an hour.

What "supportive housing" means may best be described in the negative. It's not a shelter, nor is it transitional housing, nor is it a public housing project as we normally understand that term. Conversely, though the "supportive" element of Garden Terrace makes social services and case management available to residents who need them, it's not an institution or group home or therapeutic community.

Austin has many (though, of course, not enough) of all those kinds of places that Garden Terrace is not, but housing and social-service advocates have for years been alert to our lack of a supportive-housing option -- the modern incarnation of SROs (single-room occupancies), a label attached to generations of Skid Row hotels and workers' dormitories in America's older cities. (Though "supportive housing" is both more decorous and more accurate, people in the field still use "SRO" to describe facilities like, and including, Garden Terrace.)

Many SROs got torn down or gentrified before the cities that had them realized how useful they were. They are the best, and often the only, housing option for people who fall through the unraveling gaps in the net. People like Haskell, recovering from psychiatric illness, living on Social Security, but stable enough to survive and thrive off the streets. And people like VanEgdom, who three years ago "was working for a state agency, making $30,000 a year, and living in a $565-a-month apartment," she says. "I lost my job, and it all went downhill from there." She used up her state and city retirement funds, then her unemployment, and then the part-time and temp work dried up, and over the last year of full-time job searching, the bus became her home. (Women have even fewer alternatives to the street than men; few transitional housing programs, and only the Salvation Army among shelters, accept single women.)

Thus, before Garden Terrace, the most functional among Austin's homeless -- the people with the best chance to not be homeless -- were the least served by Austin's palette of options. Says Helen Varty, "The people we see in the shelter" -- the Austin Resource Center for the Homeless, which CAHA operates -- "aren't the same people seen panhandling or sleeping in the parks. But I think many of the shelter population would be able to thrive in supportive housing. The chronically homeless need some on-site help -- not a lot, but some -- to stay in housing." Support services at Garden Terrace include mental-health and substance-abuse counseling and community building; future plans include adding job training. "But the key thing they need is the housing itself." In recent years, cities grappling with the social and economic costs of homelessness -- and the U.S. Department of Housing and Urban Development -- have re-embraced the SRO in a big way; Houston has at least eight, Dallas now has three, and San Francisco has more than 40. "SROs are a real solution," says Walter Moreau, Foundation Communities' executive director. "If you want to get people off the street, you've got to have facilities like this."

The last SRO in Austin, the old Alamo Hotel on East Sixth Street, closed more than a decade ago, and the intervening boom years made it next to impossible to build low-income housing of any kind Downtown. "We just couldn't get any property built," says Varty, "so Austin's kind of behind this curve." And unlike many U.S. cities, Austin has no supply of older Downtown buildings, of any provenance, that could be rehabbed (with HUD funds reserved for that purpose) into supportive housing.

What Austin does have, along with the rest of Texas, is a growing number of shuttered nursing homes, one of which (also called Garden Terrace) proved to be a desirable site -- large enough to accommodate FCI and CAHA's plans, located on a major travel and transit corridor with nearby services like grocery stores, and in a neighborhood that -- eventually, and not without reluctance -- was amenable to the facility and its necessary zoning change. The south side of William Cannon is far from the Downtown services complex -- ARCH, the Salvation Army, Caritas -- but it's also far from the Downtown street culture and its many temptations. "Downtown is becoming a segregated place for homeless people," VanEgdom notes.

Despite the successful track records -- of FCI (which has developed eight more "traditional" affordable projects in Austin), of CAHA, and of supportive-housing projects elsewhere -- rounding up the funds for Garden Terrace proved to be an odyssey that Moreau doesn't sound like he'd want to repeat. "Bush's HUD says it wants to end homelessness in 10 years," he says. "If they really want to do that, they need to come up with a much simpler funding strategy for SROs. I don't know that FCI would do another without a funding champion."

Compared to other kinds of housing, SROs are not cheap to develop -- Garden Terrace's $4.5 million price tag is more than $50,000 per unit for what are basically large dorm rooms (although common areas, both inside and outside, make up more than half of the property). "That's still cheaper than building from scratch," says Moreau, who had to add a bathroom and kitchenette to each of the nursing home's rooms; he now has his eye on extended-stay hotels, which are already configured nearly identically to SROs. (Ironically, the site of the Alamo Hotel is now home to an extended-stay -- a flavor of housing that has become, in the words of FCI's Robin Bradford, "the new shelter for the working poor.")

But compared to shelter services -- as well as the other venues where the homeless end up for lack of a more suitable place to go -- SROs are a lot cheaper both to develop and to operate. "It's absolutely true," says Bradford, "that Garden Terrace is an alternative to shelters and prisons and hospital emergency rooms. That's where we meet the needs of the homeless now; it's a cycle, and a project like this puts an end to the cycle."

Lead funding for Garden Terrace ($1.3 million) came from the city's Austin Housing Finance Corporation, with the balance being provided by state and federal agencies and from private fundraising, including major gifts from developer/philanthropist Dick Rathgeber and from the Topfer Family Foundation. No gift proved too small for Garden Terrace, given the project's need to raise funds during the bust. "Trying to serve the homeless is a need that's competing with kids, with seniors, with the arts, with everything else," Moreau says.

In the often fragmented world of nonprofit work, where donors lend their support to housing or basic needs or social services, it can be hard work to raise money for an all-of-the-above project like Garden Terrace. (FCI and CAHA say that churches were the only donor group for whom Garden Terrace's holistic character made it more, rather than less, attractive.) And, of course, it's always hard to raise funds for the first project of its kind, whatever the kind. "Hopefully, this project will inspire others," Moreau says. "But we have to be successful."

So far, so good. After less than three months, Garden Terrace is more than half full, having been on the radar of "every social worker in town" (says Moreau) since it was first conceived. The residents form a very diverse little community -- all colors, all ages, all manner of life stories that brought them together. "We're all people that would otherwise wind up homeless," says Haskell. "That's all we have in common."

There are certain populations -- for example, people coming straight out of prison or state hospitals (the too-common "front doors" into homelessness) -- that are not currently being served at Garden Terrace, which given its pioneer status "has to set the bar a little higher," notes Moreau, to ensure its success. "In San Francisco, each SRO has its own niche of people it aims to serve, and perhaps that will be what happens in Austin." But for now, Garden Terrace's all-walks-of-life diversity is one of its assets. "It's a place where people can get to know each other," says VanEgdom. "It's a community, not an institution. The only thing wrong with this place is that there's only one of them." 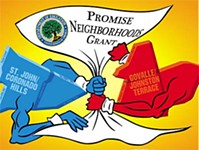