The argument over redistricting is not just chutes and ladders

"The best thing for the state of Texas," said Gary Bledsoe Friday outside the federal courtroom, "would be that they lose this case and they realize they can't do this kind of thing. If they win -- it could well be the death knell of the Voting Rights Act."

At the federal courthouse, it's tempting to try to read the omens suggesting which way the mostly inscrutable judges intend to rule. Whispering Judge Patrick Higginbotham and his largely silent bookends, T. John Ward and Lee Rosenthal, have been pretty good at not showing their hands. Ward, pouring a glass of water for U.S. Rep. Sheila Jackson Lee last week, added, "It may be the only thing I can do for you." He was joking, but as a Clinton appointee Ward is presumed to be perhaps more open to the plaintiffs' case, against redistricting, than his two colleagues, appointed by Ronald Reagan.

Based on recent judicial practice, the odds have to be against the Democrats and their minority group co-plaintiffs. But in a case in which the state's likely allies refused to stay on message -- 2001 Republican consultant John Alford of Rice University, and their current expert Keith Gaddie of the University of Oklahoma each provided evidence that undermines the state's defense of the proposed plan -- neither are the judges likely to be a slam dunk.

Whatever the outcome, the stakes are historically high. State Republicans insist that the central issue is control of Congress. "I asked to be appointed to the Redistricting Committee," testified Rep. Phil King, R-Weatherford, "because I wanted to help get more Republicans in Congress to support President Bush." That seems important enough, but George W. Bush will be president at most for another five years. The fate of the Voting Rights Act, and more broadly the rights of minority Americans, are the real prizes here. Should the state's view of the VRA prevail, the law itself will cease to have much effective meaning, and indeed will be explicitly imperiled by a Republican majority likely to casually dispense with it as no longer necessary.

"The position the state of Texas has taken totally rewrites the Voting Rights Act," says Bledsoe. "If it succeeds, you'll be able to get away with anything and everything you want to [in redistricting], all in the name of 'partisan gerrymandering.'"

Twisting in the Wind

"I've always been in favor of electing African-Americans and Hispanics," testified Houston Rep. Ron Wilson, "and I'm not turning my back on 80 years of civil rights history, in respect to people like Martin Luther King, Stokely Carmichael, Ron Karenga. ... They were fighting for a place at the table, not a ticket in the gallery." Wilson was the state's star (and only) minority witness, and attorney Andy Taylor made certain that the record reflected it: "You are an African-American?" "All day," responded Wilson.

The moment highlighted the symbolic role Wilson has played in the redistricting melodrama as the sole black legislator to support the Republican plan. They didn't need his vote, but they needed his face -- even more so in the courts, where it would be much harder to maintain the illusion of "enhancing" minority rights without a single black or Latino voice to join the chorus.

Wilson dismisses Anglo Democratic congressmen who get substantial minority support as so many Mr. Charlies, demanding African-American loyalty in return for crumbs. "It's my opinion that African-Americans have no influence in those districts," he told the congressional Democrats' lawyer, then continued, "I can't let my folks twist in the wind waiting for the good wishes or good feelings of the [congressmen] you are trying to protect."

But if, as Wilson says, minority voters have no influence in congressional districts now held by white Democrats like Max Sandlin, Jim Turner, Chet Edwards, Gene Green, Martin Frost, and Lloyd Doggett -- all with strong records on minority issues, and all targeted for elimination under the proposed map -- where in the world will they go when their representatives are Kay Granger, Pete Sessions, Joe Barton, John Culberson, Tom DeLay, or Michael Burgess, the anointed reps of the white Dallas and Houston suburbs?

"African-American citizens in those [current] districts all need help," says Bledsoe, "and despite Ron's accusations of death-bed conversions, those congressmen -- Turner, Sandlin, Edwards, Doggett, Green, Frost -- they have always been there for minority constituents, and they've shown a true commitment to our issues."

The Future of Democracy

There's no question that U.S. electoral politics is a world of narrow compromises, and at least some of the Democrats' current troubles are due to decades of racial foot-dragging when their party ruled the South. But that's far from the case now, and a cursory glance at the Capitol confirms that the Republicans in charge represent the same retrograde interests once stoutly defended by the Dixiecrats. They are not just willing, but eager, to trade a few black and brown faces in Congress for another decadelong stranglehold on statewide and nationwide political power, and their baleful influence in D.C. is steadily undermining the importance of all the public institutions that make democracy possible: education, health care, community and environmental planning, and the public oversight and regulation of major economic interests.

It requires no illusions about the limitations of the national Democratic Party to acknowledge that at the grass roots, the party still primarily represents those folks committed to popular democracy, egalitarian politics, and a fundamental inclusiveness that, however incompletely realized, represents the best of the American democratic tradition. What's finally at stake in the seemingly arcane and intramural struggle quietly proceeding through the federal courts is the increasingly cloudy and uncertain future of democracy in America. 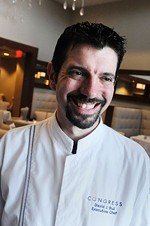