Neighborhood negotiations go much better for Stratus the second time around. 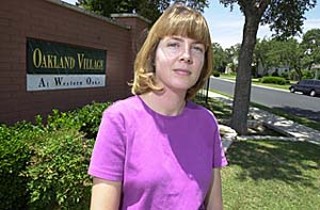 Stephani Stone, president of New Villages at Western Oaks Homeowners Association, now has a seat at the big-box negotiating table.

When Stratus Properties officials began pitching their plan for a new HEB development to environmentalists and neighborhood groups, they didn't turn first to the usual suspects but to Stephani Stone, a Southwest Austin soccer mom and neighborhood leader who earned her activist stripes a year ago as one of the developer's most vocal opponents.

At the time, Stratus had inadvertently overlooked Stone's neighboring homeowners association -- the New Villages at Western Oaks -- during the stakeholders' process leading up to city approval of its far-reaching development deal. Residents learned of the Stratus deal only a week before the proposal's first zoning hearing.

"We offended them and it was stupid of us," Stratus CEO Beau Armstrong recalled of the controversial settlement agreement with the city involving more than 1,200 acres of "grandfathered" watershed property. "That set us off on the wrong foot. Our goal this time was to make sure we didn't make that mistake twice, so we went to them first."

While Stone and others would prefer to see a smaller grocery store than the one that's planned at 93,000 square feet, their thinking is that a 160,000 square-foot retail center with a video store and a sit-down restaurant would serve a more useful purpose than the 400-plus apartments originally slated for the tract at Escarpment and Slaughter. The neighborhood had strenuously opposed the multifamily project, and Stratus' refusal to bend on a number of points resulted in a lot of ill will between the two sides.

But what a difference a year makes. "Everything has been much more amicable this time around," Stone said. "They were not as defensive and much more open to changes." In the end, the neighborhood group won 29 concessions, including greater setbacks, more green space, a playscape, a cap on building heights, and a beefed-up organic produce section.

"We figured if the City Council approved a Lowe's [in the watershed], then surely they'll approve this project," Stone said, "so we just tried to get the best situation that we could." In the long run, she added, "we think HEB will be better stewards of the land than an apartment complex, and we like the idea of shorter trips to the grocery store."

The switch from multifamily to retail will require an amendment to the settlement agreement and a zoning change, which the city boards and commissions will consider in late January before the case goes to the City Council.

Several Southwest Austin neighborhood groups have signed off on the retail project, but opposition still exists in some corners. "We don't have a problem, per se, with the change from apartments to a retail use," said Save Our Springs Alliance spokesman Colin Clark. "But our view is that if Stratus wants to amend the deal that occupied so much of everyone's time last summer, the city ought to require that they do what all other developers in the Barton Springs watershed ... are supposed to do -- comply with current codes, including the SOS Ordinance."

Additionally, some Circle C residents question why their own HOA didn't offer their homeowners an opportunity to participate in the process, though they've since managed to secure a meeting with Stratus in early January. Homeowner Sal Costello says he and others oppose the size of the store and will continue to press HEB to scale down the project to 85,000 square feet. HOA board member Ken Rigsbee says the board supports the project because it's "far preferable to the approved alternative of 410 apartment units there. ... The land belongs to Stratus. So as long as they conform to the requirements of the settlement agreement, we really don't have much legitimate negotiating leverage." Costello disagrees, and points to the bargaining leverage enjoyed by other neighborhood associations.

The 2002 Stratus deal had designated a grocery store for another tract --the southwest corner of MoPac and Slaughter Lane, across the intersection from the now-abandoned Wal-Mart site. That tract, however, held too many critical environmental features so HEB, Stratus, and its development manager Trammell Crow pulled the plug on that plan and shifted the project to the Escarpment site.

The Stratus store would not be among HEB's largest; the company's Hancock Center store is 93,000 square feet but is being expanded to 109,000 square feet, comparable to the size of HEBs at Parmer and FM 1431, on I-35 in Kyle, and at Anderson Mill Road and RR 620.