Grandfather served in the Philippines -- after that, things get kinda blurry ... U.S. Army discharge issued to the author's grandfather in 1902

Father's father was a buffalo soldier.

He was too late for the Indian wars, but in the spring of 1902 he set sail with Troop A of the 9th Cavalry Regiment bound for the Philippines, to help put down the Moro insurrection.

Those were the early years of the American Empire, and the 9th Cavalry served honorably with its famous brother regiment, the 10th Cavalry, whose troopers had given the Apaches such a hard time in the American West. Five months and five days after arriving in the Philippines, Grandfather returned from the Far East, landing at San Francisco to be discharged from the Army, at the Presidio. His souvenirs of the Philippine Campaign included a bad kidney that would trouble him for the rest of his life.

Although he never talked much about the Philippines, the Old Man remained an aficionado of the Orient all of his life, collecting Asian art and, later, living in Japan for a time. He never spoke much about the Moros or the steamy jungle or that first great American effort to quell a Muslim insurrection. He did talk about the Spanish-American War, which had taken place a couple of years before the Philippines revolt. You know, Teddy Roosevelt and the Rough Riders ... that star-spangled rap.

As far as we, his descendants, can determine (with the aid of Army records-keepers), the Old Man never went to Cuba.

He told people that he was promoted to corporal while serving with the 9th, but if he was promoted, the Army never knew it. Those facts, those discrepancies, point to a relatively recent crisis in African-American culture.

My brother Mark and sister Mia tracked down the Old Man's records. You know how that goes. Ever since Roots, black people have been trying to get in touch with our history in this country, which my good friend Harry calls the Great Bitch, America.

You may have noticed that recently, blacks are trying to do the same thing with our history that Jews have done with the Holocaust. Chronicle it, get it down on paper -- it's over, but it's not finished -- get it to the greatest repository of Americana, not the Library of Congress nor the Smithsonian, but Hollywood. When you see Gone With the Wind produced from the slaves' point of view, you'll know we've succeeded. (If it's a musical, or if the production is in whiteface, the reviews should be bad.)

Because this is an epic story. From history books we know all about the Middle Passage, the Civil War, and the Underground Railroad. Harriet Tubman, Sojourner Truth, and Phillis Wheatley have all been done. It's strange that the cloudiest part of the African-American journey on the North American continent has been the most recent ride, roughly between Emancipation, when we left the plantation, and our arrival in the District of Columbia, in August 1963, to join Dr. King for the March on Washington. That walk alone took a century. It appears there were few pauses to make notes.

Everything that happened since then, however, we have the minutes of the meeting -- or the FBI-made tapes.

The history of blacks in this country can be viewed in the usual way, by milestones: leaving Mississippi, or marching in D.C. You can focus on the same events we studied during my Negro childhood -- the Dred Scott case, Emancipation Proclamation, the Atlanta Compromise, Little Rock, and Rosa Parks -- and you can, for example, chart a direct line from Lincoln freeing the slaves to the buffalo soldiers, who played a big part in my family's social progress. (Before he enlisted, my grandfather gave his profession as "laborer"; the army was not just a step up for him, but for us as well.)

My preference in this ordering, though, is general group headings, depending on what was the major goal of the African-American race at the moment -- i.e., survival in the early years: after the slave ship docked.

And recently, power. We're in the power phase now, which is what those high-profile Negroes are doing at the White House: not necessarily solving diplomatic crises, but getting power. Must be tough. Finding a seat at the big table in Washington, D.C., must be nearly as difficult as sitting down at a whites-only lunch counter in Mississippi. 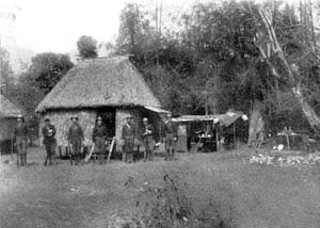 Some ways, though, the dignity phase of our history must have been harder still -- not just harder to track, but harder to live. You would have had to ask the Old Man to be sure.

The buffalo soldiers were black enlisted men under white officers. In the Old Man's day, black people were fit to be led but not to lead. Our status during his time was so nebulous: free, but not really free, not quite legitimate. We were the first bastard children of the first great bastard nation.

What we know for sure about the Old Man is pretty slim. He was born in Brenham, where they make ice cream, and he enlisted in Houston, and that's where he returned, after San Francisco. For a time he owned a business on 413 Milam St. ("fully equipped colored barbershop," the 1913 city directory reads, "also free employment bureau"), but that may only have been cover. In Houston the Old Man met and seduced my grandmother, a very correct schoolteacher recently graduated from Fisk University. She bore him one child.

The Old Man never married my grandmother, according to one romantic theory, because he did not want to sully her with his name. But, then, the Old Man kept a lot of secrets. He was "in business" in Texas the same way Satan is in religion. Grandfather was a hood.

And like most criminals, he dissimulated a lot. He "told stories," whatever you want to call it. In part it was a defense mechanism. Consider the epoch. Telling white people what they wanted to hear was a survival skill that had been passed down through several generations of American black people. The Old Man was the son of former slaves and was himself a survivor in post-Reconstruction Texas, which was not the liberal open-minded color-blind society we now know. Is that an excuse for the life he led? Maybe. The only complication is, he told black people many of the same stories.

What's surprising -- and disappointing -- is that the government isn't always so helpful in sorting out the truth. On my mother's side of the family, for example, my great-uncle went to France during the first World War. After coming home he disappeared from the family's radar screen -- Mother mentioned something recently about him becoming an itinerant musician -- until he reappeared in 1963, the year of his death, at the State Hospital in Austin, where he was being treated for an undisclosed (mental) illness.

Even today the state of Texas won't tell us why he was there. "Privacy concerns," officials say. It's unreal. Who cares, except his family? The point is, regardless of bureaucracy in government, if there's a blur where my family's history is supposed to be, and there is, we can't really blame white people for everything. Part of the problem is of our own making.

In my case I'm talking about a kind of reflex. Sometimes a family anecdote will enter one of my ears and instinctively, involuntarily, by the time it leaves my lips, a day or two later, it's been embellished. In my social circle we don't feel any particularly puritanical guilt about polishing family history, even about gilding the lily. We didn't come over on the Mayflower, after all. We arrived in the ship's hold, together with other cargo. To my mind, Grandfather did charge up San Juan Hill.

In fact, little is it known, but he led the attack.

Why, you may ask, did he even bother to lie? His experience in the Army was interesting in itself. Could his time in the Philippines really have been so boring? He didn't see any action, except perhaps in brothels; under "skirmishes and battles" his Army record reports "none." But during the Philippines campaign, two other 9th Cavalry troopers went over to the enemy -- figuring, we suppose, they had more in common with the rebels than with the white man's army. (The Old Man never acted as if he shared that view. He always knew he could get a piece of the American pie, even if he had to steal it.)

When the two soldiers tired of the jungle and surrendered, they were court-martialed and hanged. Grandfather would have been a witness to that -- at least in a general sense, whether he was at the gallows or not. But the Old Man didn't stress the downside of the new empire; he preferred to tap into that Cuba glory thing, Teddy Roosevelt and the rest. You can call what the Old Man did "telling stretchers," ô la Huck Finn, or plain lying, but I prefer to think of it as the North American residue of the West African storytelling tradition.

And when you think about the practice of embellishment, have African-Americans done anything that any other culture hasn't done? Look at the classics. Homer's Odyssey probably started out as a report about a Greek brother coming home -- after a little time away, yeah; a man's got business to take care of -- and finding his old lady stepping out on him. Millennia of embellishment followed, and we ended up with Greek mythology.

Closer to home, as great a book as it is, what kind of story is Moby-Dick?

It's a fish story that took on a life of its own.

For my family at least, finding our roots doesn't require a trip to Africa. It means spending a lot of time searching courthouse records in the southern and western United States. Our history can be traced in Army rosters and on police blotters.

We were "known" in Idaho, Montana, Texas, California, and Washington state, up near Yakima, where the Old Man ran a whorehouse with his half-sister in the Twenties. The half-sister we called Aunt Dad because she taught my father how to ride and shoot (the male authority figure, the Old Man, was not often at home). Aunt Dad once pinned a man's hand to a table with a knife for cheating at cards, or so we were told. She was a tough lady, and a great mentor to my father.

Truth is, my family got in a little trouble along the way, on the journey from there to here -- here being, as my friend Harry says, our present status, house niggers in the biggest, richest mansion on earth.

Trouble we got into wasn't all the result of prejudice, either. Bless his heart, the Old Man had issues not entirely related to his color. 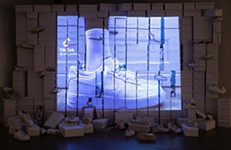 Exploring Black Digital History Through the Legacy of the Nike Air Force 1
Ciara Elle Bryant wonders when a shoe becomes an icon?