Lowe's and the city cut a deal over the aquifer. 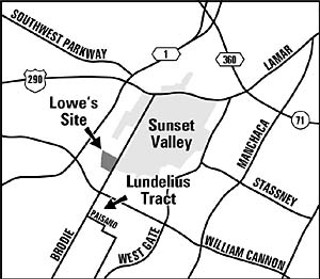 As City Council meetings go, last week's ranked among the most bizarre in recent memory, when council members led by Mayor Pro Tem Jackie Goodman took a break -- at midnight -- and repaired to a back room for 40 minutes of deal-making with lawyers for Lowe's Home Centers. But the outcome of the controversial proposed settlement agreement between the city, the retailer, and landowner Eli Garza came as expected: 4-3 approval by the divided council, and threats of a subsequent lawsuit.

"The council did the right thing," Lowe's lobbyist and former Mayor Bruce Todd said after the vote. "I would have liked to have had a unanimous council, but I'm very pleased by the vote." Goodman's last-minute arm-twisting did make Lowe's original settlement offer -- widely blasted as inadequate -- a little better for the city; the home improvement giant added nearly $400,000 in mitigation money, bringing to $1 million the amount they're willing to pay the city in order to go up against their No. 1 rival. Lowe's plans to build a 162,000-square-foot store within striking distance of Home Depot's store on Brodie Lane.

The tract, owned by Garza, is surrounded by Austin and Sunset Valley but is part of neither city, and jurisdiction over it -- and the right to set the development rules -- has been wrangled over by both cities, the county, and the Legislature. With the settlement in place, Lowe's representatives moved from City Hall to the Granger Building this week, where Travis Co. commissioners approved the final plat application for the Lowe's development. The vote was 3-1. (Ron Davis voted no and Margaret Gomez was absent, testifying in the redistricting trial.) The Commissioners Court had previously approved a preliminary plan that was conditional on a settlement agreement between Lowe's and Austin -- or a court order in the event a truce couldn't be reached.

Like the city's past development deals over the aquifer, the Lowe's agreement is also expected to draw a lawsuit, most likely from the Save Our Springs Alliance. As SOS deputy director Brad Rockwell argued in a letter to county commissioners before the Tuesday vote, because the Lowe's deal got only four votes at City Council -- unlike past agreements, such as that with Stratus Properties -- it doesn't and shouldn't override the Save Our Springs Ordinance; to do so normally requires a six-vote supermajority of the council. But Lowe's officials have argued that their development was never subject to SOS -- thanks to the language they successfully inserted in House Bill 1204 earlier this year, placing the tract under the county's jurisdiction after Sunset Valley released it to Austin in an attempt to make it subject to the ordinance.

In approving the Lowe's deal, the council also put to rest another legal dispute that had been quietly playing out a half-mile down the road from the Garza tract, on a parcel of land known as the Lundelius tract. With Lowe's kicking in more money, the city plans to acquire the 19-acre Lundelius property at Brodie and Paisano Trail, and thus put to rest a long-running dispute with the Lundelius family, which has claimed grandfather rights on their environmentally sensitive property and has sought to develop it under far less stringent water-quality controls than SOS. Les Tull of the city's Watershed Protection and Development Review Department pointed out that the Lundelius tract collects quite a bit of runoff and would be a prime spot for an environmental retrofit because of its proximity to Dry Fork Sink, located immediately north of the property.

The Lundelius deal may help the city quell criticism that Lowe's mitigation money is too meager to buy land close enough to the site to have the desired impact. (Leaving out Lundelius, the Lowe's funds are enough to buy land at about $7,000 an acre, which in reality means land many miles away from the Brodie Lane/U.S. 290 retail corridor. Lowe's is paying $200,000 an acre for the Garza tract.) On paper, the sweetened $1 million mitigation fund reduces Lowe's effective impervious cover on the Garza tract from 40% to 13.6%. (The SOS Ordinance would require 15%; Sunset Valley rules now require 18%.)

"A lot of time, effort, and money has already been spent on lawyers, engineers, and negotiations," Goodman reasoned. "[So it] seemed like if all of that commitment was there and those kinds of resources being spent, why didn't we just cut to the chase here and take it to what was going to make everybody feel more comfortable?" The $1 million payment, the mayor pro tem added, "seems like something that Lowe's could conceivably do without hurting themselves, and it definitely helps us. So it was very simple reasoning."

Goodman also got Lowe's to agree to keep the store's arsenic-treated wood under cover, but as environmentalists later pointed out, that was hardly a concession on Lowe's part, since manufacturers and retailers are under pressure to have arsenic-treated wood phased out of their inventories altogether by the end of the year -- less than two weeks away. In a final concession hammered out during the witching-hour break, Lowe's agreed to adhere to Sunset Valley's "dark-sky" lighting standards.

As they did in two prior readings of the Lowe's deal, Daryl Slusher, Raul Alvarez, and Danny Thomas cast the dissenting votes. "I think it's so unusual to take a 40-minute break and come back out with the deal," said Slusher. "I'm uncomfortable with that, even though I do think that it's better." Still, he continued, Lowe's "could afford to do more. They could afford not to build over the aquifer." In his view, the Lowe's agreement does not measure up to past settlements, like Stratus', that specifically limit big-box developments over the aquifer.

The Lowe's issue has caused considerable strain on the relationship between Austin and Sunset Valley; earlier in the meeting, Slusher took the smaller city to task for starting the whole Lowe's mess in the first place. "We've learned from our mistakes," Sunset Valley Mayor Terry Cowan responded. "Are we trying to do the right thing? You're damn straight we're trying to do the right thing, or we wouldn't be here tonight. Are we going to work with Austin? You're damn straight we're going to work with Austin, if you work with us."