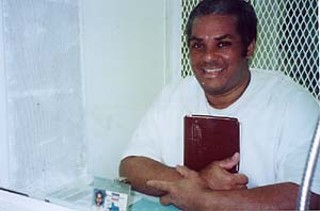 Washington, D.C. -- On Monday, Dec. 8, the U.S. Supreme Court heard oral arguments in the Texas death row case of Delma Banks Jr., convicted of the 1980 murder of 16-year-old Richard Whitehead near Texarkana. Earlier this year, the high court issued a last-minute stay of Banks' March 12 execution date. On Monday, Assistant Attorney General Gena Bunn faced pointed questions from the justices regarding Banks' claims that Bowie Co. prosecutors knowingly withheld potentially exculpatory evidence (and continued to withhold it for well over a decade) that compromised the state's two key witnesses and tainted the outcome of the trial.

Whitehead's body was found on April 14, 1980, in Nash, Texas, and the police investigation quickly centered around Banks, one of the last people known to have seen Whitehead on the preceding Friday, April 11. Several weeks later, Banks was charged with capital murder -- prosecutors said that Banks, then a 21-year-old with no previous criminal record, killed Whitehead to steal his car so that he would have a way to get to Dallas. Banks says that he did go to Dallas that weekend to look for work, but that he hitchhiked from Texarkana. Banks has maintained his innocence for 23 years and says he has no idea who killed Whitehead.

The state's case relied almost entirely on the testimony of two witnesses, Robert Farr and Charles Cook, both of whom have since recanted. Cook testified that he met Banks the weekend of April 11, when Banks pulled up in front of Cook's Dallas home driving Whitehead's Mustang. Cook said that over the course of the weekend Banks confessed to killing Whitehead -- "for the hell of it" -- and asked the man he'd just met to dispose of both Whitehead's car and the murder weapon, a .25-caliber pistol. (The car was never recovered; earlier this year Bowie Co. District Attorney James Elliott told the Chronicle that investigators never even looked for it.)

Farr testified that nearly two weeks after the murder, Banks asked him to go to Dallas with him so that Banks could retrieve his gun in order to commit armed robberies. In their arguments to the jury, Bowie Co. prosecutors underscored the truthfulness and importance of the testimony of both Farr and Cook.

But prosecutors failed to disclose information about Farr and Cook that could have been favorable to the defense and perhaps affected the trial outcome. Farr had in fact been paid by Bowie Co. Sheriff's Deputy Willie Huff to try to retrieve a gun from Banks, and had concocted a story about his needing a gun in order to get Banks to go with him to Dallas. Prosecutors also failed to disclose that, prior to Banks' trial, they coached Cook extensively on the substance of his proposed testimony, including the story about Banks' alleged confession. On the stand, Farr denied having ever taken money from police, and Cook denied having rehearsed his testimony. Prosecutors never corrected those lies, and instead told the jurors that their witnesses' testimony was of the "utmost importance" to their case against Banks.

Banks' attorney George Kendall told the Supreme Court that Farr's testimony was the linchpin of prosecution contentions that Banks would be a future danger to society and deserved a death sentence. Justice Antonin Scalia pressed Kendall on whether the real story would have actually made a difference in the outcome of Banks' trial. "You have the burden, don't you, to show that the outcome would've been different if the jury had known that [Banks] was going to [Dallas] to get the gun in order that Farr could commit the robberies?" Scalia asked. "You think that would've made a difference?" Kendall noted that Farr had later recanted that testimony as well and said that "nobody intended to rob anybody."

But the justices saved their toughest questions for Assistant Attorney General Bunn, who told them that prosecutors were not required to tell Banks' attorney about Farr's status as a paid informant because that information was not "material" to the case -- a position that seemed to flummox the justices. "Why wasn't there a responsibility on the prosecutors to come clean?" asked Justice Ruth Bader Ginsburg. "Why is the burden on the defendant? Why isn't it the prosecution's burden to come clean at any stage? I just don't understand. Why isn't that a continuing obligation [of the prosecution]?" Ginsburg pointed out that under Texas' rules of evidence, the state is required to disclose that a state's witness is a paid informant. "What authority do you have that when the government puts an informant on the stand that they don't have to reveal their identity?" she asked.

"Well, your honor, again ... a violation of the state rules of evidence does not violate the constitution," Bunn replied.

Bunn also argued that Banks shouldn't be allowed to raise any questions about Cook in federal court because he hadn't raised those questions in state court. According to Bunn, Banks should've been able to find out that prosecutors interviewed Cook prior to the trial -- even though Banks' attorneys didn't find out until the early 1990s that a 74-page transcript of that interview even existed. Just because the prosecutors didn't reveal the information, that "did not prevent [Banks] from developing that claim" earlier in the appeals process, Bunn said. Banks' attorneys "could've procured this evidence," she said. "That is part of our position, absolutely."

"In the face of the state's misrepresentations -- you would've told [Banks' attorneys] that there wasn't anything there, but you're saying they should have pursued it?" asked Justice Stephen Breyer. "What bothers me about your position is that you say that the defense counsel behaves unreasonably [by not pursuing that claim] when they were relying on the statements of the prosecution. They say the justice system lacks integrity, and this might add to it." Bunn replied that if Banks weren't required to raise the question sooner it would mean certain claims would never be exhausted -- leading to a potentially endless cycle of appeals. Breyer disagreed: "All that requires is that the [prosecutors] be telling the truth."