The federal court takes up the Texas congressional re-redistricting case. 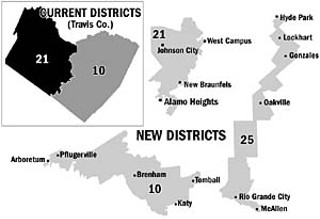 This morning (Thursday, Dec. 11), formal proceedings finally opened in the congressional re-redistricting trial brought in federal court by a host of plaintiffs against the state of Texas. The day began with a hearing for summary judgment (postponed from Monday due to the Tyler funeral of federal District Judge John Hannah). If, as expected, the court declines to grant the judgment, the trial is expected to last a week or two, although the federal panel (three judges from the U.S. District Court for the Eastern District of Texas, Tyler Division) warned the assembled banks of attorneys at a Tuesday pretrial conference to avoid argumentative redundancy.

We feel their pain. Not much has changed in the shape of the redistricting debate over the last several weeks, and regular Chronicle readers are by now familiar with the refrain. The plaintiffs -- representing several groups of voters, the Texas Democratic congressional delegation, and independent groups like the NAACP, MALDEF, and the American GI Forum -- will argue that the mid-decade redistricting, in the absence of a court order, flouts both tradition and law, and most specifically violates the voting rights of minority Texans by effectively preventing them from having even indirect influence on congressional elections. The state counters, in its brief released earlier this week, that not only does the Republican-authored plan not violate minority voting rights, it enhances those rights. "This new plan, without allowing race to serve as a predominant factor," argue Attorney General Greg Abbott, outside counsel Andy Taylor, et al., "accomplishes Texas's stated public policy goal of better reflecting current voting patterns in the State. It also accomplishes the State's stated public goal from 2001 of creating an additional African-American opportunity district and an additional Hispanic opportunity district -- namely, CD 9 in Houston ... and CD 25 in the lower Rio Grande Valley, running south to north from Hidalgo County up to Travis County."

The state's brief does grudgingly acknowledge that the plan needs to "add" the African-American opportunity Houston-area District 9 (ostensibly a minority opportunity district before the mappers even touched it) because it simultaneously dismantles the Dallas-area District 24 (Rep. Martin Frost's existing African-American opportunity district). But the brief does not address at all, on the other hand, the dismemberment of Travis Co. represented by the elongated District 25 (describing that new district as "in the lower Rio Grande Valley," although geographically preposterous, is a nice rhetorical touch), nor the fact that the new plan neatly nibbles away the Hispanic opportunity from Henry Bonilla's District 23. Perhaps those outcomes also reflect "Texas's stated public policy goals."

The state's brief recognizes that the potential negative effects on minority voting rights remain the strongest arguments for those attacking the new map, and the brief rests its defense on Supreme Court precedents allowing a little bit of racialism: "direct evidence of legislative purpose will prove that politics, not race, was the predominant factor motivating the Legislature's decision to place a significant number of voters within or without a particular district."

There were two other new developments in the run-up to this week's trial. The court rejected (at least temporarily) subpoenas for the testimony of Republican U.S. Reps. Tom DeLay and Joe Barton, both of whom were directly involved in the redistricting effort, on the grounds that it is too early to determine whether their testimony will be relevant or necessary. (The congressmen's lawyers had argued that requiring their testimony is a judicial imposition on the legislative branch.) And on Dec. 1 the Colorado Supreme Court ruled, concerning that state's similar re-redistricting battle, that the Colorado Constitution effectively limits the state General Assembly's power to redistrict to once every decade, following the federal census. "Having failed to redistrict when it should have," wrote the court, "the General Assembly has lost its chance to redistrict until after the 2010 federal census."

The Texas AG's office was quick to point out that the Colorado court was relying on that state's constitution, and that neither the law nor the decision applies directly to Texas. But in making its decision, the court also reviewed common state practice and tradition, and noted that the framers of the U.S. Constitution, in considering congressional apportionment, tried to balance the goals of stability and equality of representation over time. "This fundamental tension between stability and equal representation," wrote the court, "led the framers to require ten years between apportionments ... [as] short enough to achieve fair representation yet long enough to provide some stability."

Whatever the outcome of the Texas trial, that is an argument that will no doubt return to the discussion, on its long but inevitable route to the U.S. Supreme Court, which also begins consideration this week of a Pennsylvania redistricting case concerning the theoretical limits of partisan gerrymandering. The Department of Justice has until Dec. 22 for a decision in its preclearance review of the Texas map; according to Andy Taylor, the DOJ has informed the state it intends to meet the deadline.