The redistricting case resumes: one battle in a protracted war 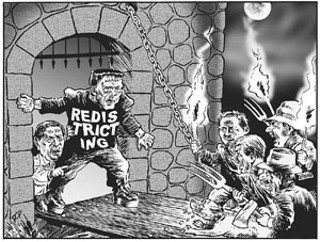 Next week, in what may prove the decisive battle in the seemingly endless Texas congressional re-redistricting war, a federal court will convene in Austin to consider the case of Walter Session et al. v. Rick Perry et al., the omnibus lawsuit brought by various groups of voters, Democratic officeholders, and minority rights organizations against the new map installed by the Republicans after months of Texas political bloodshed. There is, in theory, a phantom's chance that the court will meet Monday and, with the wisdom of Solomon, throw out the baby, the bathwater, and all the assembled supplicants with an invocation to go and sin no more. But few judges ever made history by driving away business.

There is an even more remote chance that the Civil Rights Section of Attorney General John Ashcroft's U.S. Department of Justice will somehow locate its backbone, defy the boss and prevailing political winds, and rule that a congressional map that idly juggles and scatters minority communities as if they were billiard balls is an insult to democracy, let alone the Voting Rights Act.

We should live so long.

A Monday summary judgment, for either side, is a very long shot indeed. In all likelihood, three days later the court will reconvene as scheduled, the missile banks of attorneys will fire their best shots, and we'll hear a contrapuntal reprise of all the arguments reverberating around the Capitol since spring, so long ago. The core argument of the plaintiffs will be that the new map violates constitutional tradition, federal law, and most particularly the voting rights of millions of minority citizens. The core argument of the defendants (effectively the state of Texas) is that the Legislature has the constitutional responsibility and authority to draw congressional districts, it has done so according to law, and it has been punctilious in protecting the voting rights of minority Texans.

It is difficult to handicap the federal court. Apparently in the state's favor is that two of the three judges are Republican appointees. But these are the same judges who installed the current map in 2001, and who heard the state of Texas defend that map -- also Republican-drawn -- as legally binding. Federal judges as a rule are a testy lot, and it does not do to overestimate the patience of one who believes he's being hornswoggled.

Also not to be overestimated are the larger national stakes. The Texas redistricting marathon has long since glazed the national eyeballs, and yet the recent Medicare episode in Congress bleakly illustrates the potential of a handful of votes. House Republicans were forced to abandon legislative protocol and twist arms for three long hours in the middle of the night so they could narrowly enable the next major step in unraveling the American social safety net -- returning the elderly to the tender mercies of the private medical market. This was a horse-trading exercise and a public relations burden they would rather not have to endure. Texas Democratic House members, as a group, are no stellar champions of social progress -- but they are more often required, by the makeup of their voting constituencies, to pursue or defend policies that maintain the welfare and defend the rights of ordinary working Texans.

That structurally moderating influence on state and corporate power -- the necessary seats at the table for ordinary citizens -- was the real target of the Texas re-redistricters. That determination was further illustrated in the lopsided political assault on the Legislature over the map itself. Responding to Democratic charges that Tom DeLay ramrodded the entire process, nominal map author Rep. Phil King, the Vicar of Weatherford, said DeLay simply "acted as a good mediator. He certainly threw his ideas in there, but he was anything but demanding or dictatorial." King neglected to mention, of course, that any "mediating" DeLay did was entirely between Republicans and Republicans -- as the token Democratic committee members pointed out, the disenfranchised were never even allowed into the room.

Under these circumstances, it is understandable why the state's major civil rights organizations -- the NAACP, Mexican-American Legal Defense and Educational Fund, the League of United Latin American Citizens, the American GI Forum -- swallow hard and defend the districts of Anglo Democrats, even Blue Dogs like Charlie Stenholm and Ralph Hall. Those Blue Dogs are a very uneven lot, but they must heed minority voices, because (since the civil rights revolution) in the words of the NAACP, "many of these representatives, if not all, would not have been elected were it not for the African-American vote." In other districts, it is the Hispanic vote that has been decisive -- and the GOP strategy there is to circumscribe and delay that growing power as much as is politically (and judicially) possible. Under the DeLay map, writes Gary Bledsoe of the NAACP, "African-Americans in Beaumont, Galveston, Texas City, LaMarque, Austin, Killeen, Waco, and Fort Worth among many others are exiled into districts where their needs and concerns will be illegally and needlessly frustrated." It's a dispiriting litany of the underserved and overlooked Texas, and that stanza doesn't even address the poorest and most disempowered region of the United States that runs from San Antonio to the border.

It is easy enough to shrug, "A pox on all their houses," but one does not have to be enamored of the contemporary Democratic Party to recognize that Southern Republicans, Texans among them, are continuing the rear-guard action of the old Dixiecrats against the broad but precarious gains of 40 years of popular movement for civil rights and social justice. We are a long way from finding a political structure that fully expresses the voices and interests of working people, but to turn our backs on the fight is to surrender the reins of state to the likes of Tom DeLay and Joe Barton, Tom Craddick and Joe Nixon.

When they offer to mediate, we're not in the room.

Editor's note: On Monday, the Colorado State Supreme Court threw out that state's GOP-led re-redistricting. Although the Colorado redistricting was similar to Texas', it does not appear that the decision will have any immediate legal effect here, as it was a state lawsuit, not federal.