Equal protection: "a different brand of law enforcement' may be just what the Eastside needs 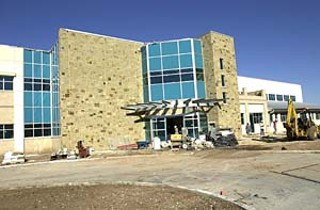 I imagine I'm not the only one who noticed the odd juxtaposition at last week's City Council meeting. At the noon hour, during citizen communication, the council got a tongue-lashing, which only barely simmered down into an ad hoc "dialogue," from familiar faces in the African-American community -- Black Citizens Task Force leader Dorothy Turner, NOKOA Publisher Akwasi Evans, NAACP head Nelson Linder. They were not satisfied with City Hall's elaborate public response, two days earlier, to the special report from the Travis Co. grand jury that indicted APD Officer Scott Glasgow for criminally negligent homicide in the June shooting death of Jessie (B.J.) Owens, in which the jurors claimed to have perceived "a different brand of law enforcement" in East Austin.

Not more than an hour earlier, the City Council was likewise occupied with a "dialogue" about APD, East Austin, and communities of color, in a tone that could not have been more different. Even in the context of a sad occasion -- the death of APD legend Robert Martinez Sr., the most decorated officer in department history -- that brought nearly everyone who spoke (including members of the council) to the brink of tears, there was little question that the city was celebrating a legacy that went beyond Martinez's personal accomplishments.

Memorializing Martinez with the naming of the new Central East substation and forensics facility under construction on Springdale Road -- an honor that required amending the city code -- is also, inevitably, a statement about the relationship between APD and the Latino community in East and Southeast Austin. And not an arbitrary statement, for that is Robert Martinez Sr.'s legacy as a police officer -- that is, as an Eastside native who spent his 30-year career working in and with the Latino community, in a bunch of different ways and settings, with an outstanding record of success at protecting and serving. To be sure, overemphasizing ethnicity here risks demeaning Martinez's standing as a leader and exemplar among police officers of all colors. But to underemphasize this element of his legacy is likewise missing the point.

Basically, Robert Martinez was the acme of "community policing" before that term was invented and became a buzzword. If we embrace the rhetoric on race we heard last week from the city and APD, the "community" that Robert Martinez policed just happened to be Latino, and he was a great police officer who likewise just happened to be Mexican-American. I don't think it's that simple. What I've seen chronicled in the tributes to Martinez -- in the press, at his memorial service, and at the City Council -- looks a lot to me like "a different brand of law enforcement." Different in a good way. The way that works.

I'm not naive enough to think that relations between APD and the Latino community in Austin are not without difficulty today, but Martinez, though exemplary, was not in this sense "one of a kind" -- the work APD has done on behalf of Latino citizens (and, for that matter, noncitizens) has been honored before and will be again. On balance, APD's relations with the Latino community are not that bad, which we should remember when we hear the usual white liberal euphemisms of "diversity" and "communities of color" and "East Austin."

The relationship between APD and the African-American community, on the other hand, is that bad; on this score, I have to say I agree with Dorothy Turner, though you need not take her word for it. Nor need you believe, as I suspect Turner and Evans and Linder (and many others) may believe, that law enforcement has been hostile to African-Americans by definition -- here and elsewhere, now and forever -- to appreciate that many black Austinites don't trust the cops, are afraid of the cops, are afraid for their kids, and tell their kids to avoid or even run from the cops.

This fear and mistrust, at least in my experience, is found not only among those who (like Dorothy Turner) see law enforcement as just one element of an oppressive regime, but also among black Austinites who convey little, if any, broader mistrust of white people or a "white power structure." I suspect the latter group includes members of the grand jury -- such as retired APD Capt. Freddie Maxwell, the first African-American in APD history to attain that rank. In its report, the grand jury noted that "many times" (emphasis mine) during its deliberations it encountered the "different brand of law enforcement" that it deplores -- that is, not just in the high-profile Owens case.

That's what, as far as I can tell, black Austin sees -- a relationship with APD in which race is not always defining but never irrelevant and where the shooting of young black people by white officers is not nearly as surprising as it should be in a civilized city. One imagines that such shootings will always be controversial and perhaps unforgivable. But the "dialogue" following such a tragic incident might be different, and less baffling or disheartening to city leaders, if APD's role in black Austin life, or in East Austin life, in general were more clearly positive. I'm not sure I can remember the last time I heard black leaders celebrating the work of APD the way Robert Martinez's legacy has been celebrated.

Should race be relevant? The "right" answer, of course, is no. That's what Danny Thomas -- who has obvious gravitas on this issue -- meant when he decried the perception of a double standard; what APD Chief Stan Knee meant when he said assigning black officers to black neighborhoods would be "a step backward"; and, for that matter, what Linder meant when he brandished the 14th Amendment and charged the City Council with failing to enforce it. Equal protection under the law.

But the "right" answer may be wrong -- "equal protection" in this context, after all, suggests equality of result, not of opportunity, and not only does not preclude but may require treating different communities differently. Affirmative action, if you will -- or at least an acknowledgment that "diversity" is, quite explicitly, not the same as color blindness. Would it be bad for Austin to have a police department that was uniquely attuned to serving the African-American community, just as APD has for years taken pride in its efforts to meet the specific needs of the Latino community? Isn't that why Robert Martinez Sr. is a hero -- because of what he did, over the years, to help "people of color" in "East Austin"?

This is what I read between the lines of the grand jury report, which makes mention of young, ill-trained (and, one assumes, Anglo) officers thrown onto the East Austin streets. According to APD's stats, the average patrol officer in the Central East command really isn't much greener, or for that matter whiter, than his or her counterparts elsewhere in town. But maybe the-same-as-everywhere-else is just not good enough, at least for now. Do we need a unique strategy for policing in East Austin that will help black citizens believe, as Latinos apparently do believe, that the police in general are here to help?

Or we can avoid the race issue and simply say that community policing has yet to succeed in "East Austin." Even if, as Knee pointed out last week, the violent-crime rate on the Eastside is the lowest in town, that law-enforcement success has come at a cost. The question then becomes how APD transforms itself into -- or, as the Martinez legend suggests, back into -- a department that is really part of the (diverse) community it serves. I don't think it can do that without acknowledging that race, in fact, does matter.