Busted! Maspero Suspended for the Duration

The Williamson sheriff's own deputies say he needs to go. 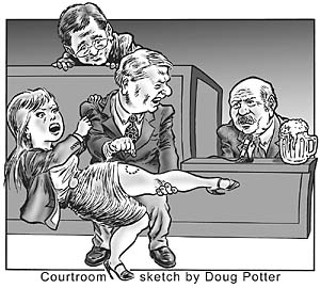 On Nov. 24, the same day that Williamson Co. Sheriff John Maspero was slated to graduate from an alcohol rehabilitation program, visiting District Judge James F. Clawson ordered him suspended from his job pending the outcome of a civil case brought by County Attorney Gene Taylor, which seeks to remove Maspero from office. Clawson also granted Taylor's request for a temporary restraining order and injunction, prohibiting Maspero from having any contact with any current or former employees of the sheriff's office for the duration of the case. The ruling comes after two days of court testimony related to Taylor's bid to remove Maspero from office for public drunkenness, incompetence, and official misconduct.

Maspero has been in hot water since being stopped while staggering along Georgetown's Williams Drive on Oct. 11, after leaving a barbecue fundraiser at nearby San Gabriel Park. Passing motorists called 911 to report an "older man" who was staggering down the road, in danger of falling into passing traffic, and who had also stopped along the roadside (near an elementary school) to urinate in the bushes. As it turned out, the staggering drunk was Maspero, and although the Georgetown officers who responded to the calls determined that Maspero was drunk, they declined to either arrest him or issue a ticket for public intoxication; instead, he was given a "courtesy transport" to a nearby house.

After the incident, Taylor asked that Maspero resign or face public ouster pursuant to Local Government Code provisions for the removal of an elected county official. Maspero declined to step down, apologized for his actions, said he was looking forward to running for re-election in 2004, and announced that he was entering an outpatient alcohol treatment program to deal with his drinking problem. (Maspero, a Republican, now has three declared opponents in the March GOP primary.)

But in just three weeks, Taylor and a crew of six investigators assigned to a Public Integrity Task Force uncovered a host of serious allegations against Maspero, and on Nov. 12 Taylor filed suit in district court seeking his removal.

On Nov. 21, the sheriff spent nearly six hours on the witness stand during a preliminary hearing to determine whether he would be allowed to remain in office while his case moves forward, fielding questions related to the numerous allegations. According to Taylor's suit, on top of at least a dozen charges of public drunkenness, Maspero faces two allegations of sexual harassment of female sheriff's deputies; a charge that he bit a dancer on the thigh while drunk and pretending to be a dog at the Penthouse Men's Club; and an allegation of official oppression for threatening Chief Deputy Sheriff Richard Elliott with termination unless he publicly defended Maspero in the media. During questioning, Maspero admitted to having had too much to drink on two occasions -- the only two of the 12 alleged incidents that have received previous media attention -- but claimed he couldn't recall how much he'd had to drink on other occasions.

"Does your memory get bad when you drink?" Taylor asked hotly. "Not that I'm aware of," Maspero replied. And in an attempt to try to get Maspero to codify how much he'd had to drink on various occasions, Taylor repeatedly asked the sheriff to use a zero-to-10 scale -- zero being sober, 10 being snot-slinging drunk -- but Maspero declined to do so, saying that he simply didn't understand Taylor's scale.

And Maspero repeatedly denied the other, seemingly more serious allegations raised by Taylor's probe. Regarding one allegation of sexual harassment by a female deputy -- who said Maspero touched her inappropriately on her lower back while at a party -- the sheriff testified that he didn't recall the incident, but that even if true, it wouldn't constitute sexual harassment unless he'd "offered her a better job or threatened [her job] in exchange for sexual favors." When asked about the alleged dog-bite incident at Penthouse, Maspero said that he has been to the club on several occasions, but that he had not been at the club in either January or February, when the barking-and-biting incident was alleged to have taken place. (Taylor declined to ask Maspero whether the incident itself -- whenever it may have been -- actually took place.) Maspero also denied threatening Elliott -- the acting sheriff during his stint in rehab -- if the chief deputy didn't publicly support the sheriff.

Although the 59-year-old Maspero offered a list of his accomplishments as sheriff -- such as increasing pay for his deputies, earning state compliance for the county's jail, and securing funding for a $1.1 million regional officer-training facility -- it apparently wasn't enough to counter the testimony of top Maspero deputies, who testified Nov. 24 that they believe Maspero should step down now. Assistant Chief Deputy Jack Hall said he would resign if Maspero did not and that he thought Maspero's decision to enter rehab was a "ploy" and "just part of the damage control." And Assistant Chief Deputy Robert Chapman -- a former Austin police officer and brother of APD Assistant Chief Jimmy Chapman -- testified that it would be "extremely beneficial" if Maspero resigned. Maspero's continued presence at the office would negatively affect department morale, he testified. (Jimmy Chapman, of course, is embroiled in his own controversy -- a saga in which Maspero is a main character. See p.18 for the latest.)

Maspero will remain on suspension, with pay, pending the outcome of his case, which is scheduled to go to trial on Jan. 12. Clawson appointed Elliott interim sheriff until a jury can decide Maspero's fate. 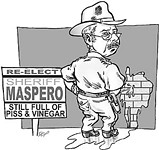