Riding out the Bush boom: whether the economy is robust or lackluster depends on where you're standing 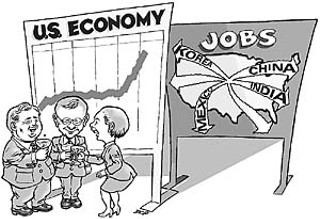 I've been trying hard to get into the celebratory spirit over the great news coming out of Washington -- you know, the dreary end of the Clinton Recession and the roaring takeoff of the Bush Recovery -- signified by the 7.2% third-quarter increase in the gross domestic product, the largest such bump in nearly 20 years. The GDP number undoubtedly includes some products rather more gross than others -- somebody like Lockheed or Halliburton is supplying those 500-pound bombs defending us from ungrateful Iraqis who can't tell the difference between liberation and conquest. But even daisy cutters have to be bought and paid for with good ol' American money, and plunging another $87 billion or so -- this year -- into the military-industrial complex is bound to create a few good-paying jobs.

Ah, but then there's the jobs conundrum. Even while we're enthusiastically applauding the burst in GDP, most of us live on money accumulated CTC -- check-to-check -- and there's the undeniable knowledge that some 2.7 million jobs have disappeared in the three years it's taken Boy George to unleash his brilliant economic recovery plan. Despite slightly better unemployment numbers following the GDP announcement, analysts reported that while the economy was adding about 126,000 jobs in October, layoffs simultaneously reached 172,000, the highest level in a year. The arithmetic is not encouraging.

I'm not particularly nostalgic for the Clinton bubble -- even while jobs were being generated by the high tech/stock market frenzy, just as many were being permanently shipped overseas by the speculative "free trade" race to the bottom, accelerating the landslide toward a society (and a world) more radically split between haves and have-nots. Many of us tend to think of rational economic policy as governmental action for the common good. Despite some election-year grumbling around the edges, the bipartisan national consensus remains that "economic development" means no-strings-attached "incentives" to investors who make their profits by squeezing higher productivity out of fewer and cheaper employees, leaving most of us standing, by default, in the wrong line.

Mired in these gloomy musings, I was yanked back into Pollyanna-land again by Gov. Perry, who declared last week that, like radio huckster Paul Harvey, he knows "the rest of the story" missed by most of the media. "Since September 2002," declared the governor, "more than 44,000 net jobs have been created in Texas despite the national economic slowdown." Predicting that another 8,000 or so jobs will be added to the Texas economy over the next several months, Perry explained, "our tax and business climate has brought about modest, but encouraging, job growth."

Setting aside whether the governor of a state of 20 million people and 11 million workers should be reduced to bragging about the possibility of 8,000 new jobs, Perry carefully neglected another aspect of "the rest of the story." The same analysts at the Texas Workforce Commission who announced the annual job gains noted that 36,000 of the 44,000 new jobs created over the past year came from state and local government hiring (including schoolteachers for the fall semester), while manufacturing employment in Texas was falling by 33,000 jobs. We haven't yet seen the full effects of the state budget cuts that took effect in September, but it seems reasonable to expect that for the new year, we'll have to look elsewhere for at least 36,000 jobs.

How'd we do so remarkably well? "Our common-sense conservative philosophy is paying off for Texas families and taxpayers," the governor concludes. "We balanced our budget by reducing state general revenue spending by $2.6 billion and not raising taxes." There is, of course, that troubling report from impertinent Comptroller Carole Keeton Strayhorn, who counted $2.7 billion in new costs and fees to be magically extracted from Texans' pocketbooks "without new taxes." The largest chunk was $1.2 billion directly deducted (not "taxed") from public school teacher and staff paychecks in order to return the same amount in "new money" to school districts. As a shell game, it's cynical enough to not even require a shell.

I'm trying to maintain my optimism, keep on the sunny side, remember the silver lining, join in what the consultants call "boosting the psychology of the market." Just because the Perry administration and the Legislature sucked billions out of the state economy, kicked thousands off health insurance, and are poised to hand over millions in state social-service dollars to companies renowned for low wages, incompetence, and secrecy, it's no reason for despair. Like the governor says, the real story is "of a Texas of unlimited opportunity, better jobs, and a brighter future."

Unfortunately, those pesky folks over at the Center for Public Policy Priorities insist on reporting the rest of the rest of the story. While President Bush was crediting his tax cuts for putting the country back on "the path to prosperity," the Census Bureau was reporting that the number of Americans living in (official) poverty had increased by 1.7 million in 2002, and that the number of people going hungry had increased for the third straight year. Adapting Department of Agriculture figures to Texas, the CPPP reported, "Almost 15% of Texas households are 'food insecure,' which means they can't always afford enough food to feed their families, [and] just over 4% of Texas households experience actual hunger due to limited resources." Closer to home, the Capital Area Food Bank reports that after last year's 47% increase in emergency food assistance requests, the first quarter of 2003 brought another 25% increase.

Consider those numbers for a moment: The official Texas unemployment rate is at 6.5%, and yet 15% of Texas households find it difficult to keep food on the table throughout the year, which means most of those adults going hungry are already employed in our robust and expanding economy. Never mind the children, roughly a quarter of whom (1.4 million) live in food insecure households. If they can't work, they shouldn't expect to eat.

The national numbers on food insecurity are still bad, but closer to 11% -- the difference, one suspects, is what the governor calls our "better business climate [and] our conservative, common sense philosophy paying off for Texas families." Remember, those families going hungry are doing their conservative, common-sense best to hold down wages.

And that's the rest of the story.