The DPS Throne and the Power Behind It 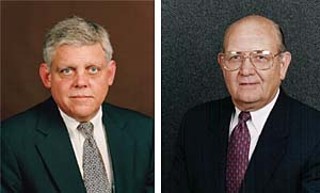 There's a simple formula for predicting who will be the next director of the Texas Department of Public Safety. Divide the agency by two, with traffic law enforcement (the uniformed troopers) on one side and criminal law enforcement (the detectives) on the other. Even though the three-member Public Safety Commission, appointed by the governor, has final say, traditionally the DPS directorship rotates between the two divisions -- suits one time, uniforms the next. For example, the last director was from traffic enforcement, the present director is from criminal law enforcement, and waiting in the wings, the assistant director of DPS spent his career in traffic.

The current director is Col. Tommy Davis, a 62-year-old former criminal investigator who began his career with DPS 39 years ago as a trooper in Houston, and later served there as a detective as well. Davis is genial, mostly well-liked by his subordinates, and respected by the Legislature -- he has guided the agency since the beginning of the millennium, as DPS has shifted somewhat into a counterterror mode. Col. Davis became fully vested in his pension three years ago, and while he describes as "absolutely crazy" any suggestion that he's going to retire -- well, just in case, the heir-apparent is down the hall.

Lt. Col. David McEathron, 51, is a by-the-book officer described by subordinates as smart, hardworking, but not necessarily the most creative intellect. McEathron joined DPS in 1977, listing on his application a talent only for shooting. He graduated from the academy 18th in a class of 103, turned out to be just average with a shotgun, good with a rifle, but received an A-plus in public speaking, a skill which has served him in a rapid rise through the department. McEathron was recognized early on for excellence in management skills, was sent to Northwestern University for advanced studies, and also to the governor's management classes for high-ranking state officials. As a young trooper (the closest he came to Houston was Galveston), he was apparently a hot dog on drunken-driving arrests. His only confirmed disciplinary action came after he called a DWI suspect a "smartass" and also told the man, "We don't have to put up with your bullshit." DPS takes courtesy very seriously, and anyway, that was almost a quarter-century ago.

Should he indeed get the top job, however, McEathron does carry some more troubling baggage. He was in charge of traffic law enforcement in 2000 when that division was hit by public charges of racial prejudice and Klan activity. McEathron went into denial mode, and received a mild public rebuke from Jim Francis, then chairman of the Public Safety Commission.

Which brings us to the real power at DPS for the past eight years: Commissioner Francis, who in October announced his intention to leave his responsibilities at the department. Francis, a Bush appointee, is a Dallas businessman (he has the distinction of having negotiated the purchase of the Dallas Cowboys football team and later its sale for his bosses, the Bright family of Dallas). He is best known as a Republican Party moneyman: the creator of W.'s Pioneer-class of megacontributor, Francis has the president's ear and is one of the most powerful men in the state. He served as a political aide to Gov. Bill Clements and dates his association with the Bushes to George H.W. Bush's 1970 run for the U.S. Senate.

It's hard to overestimate Jim Francis' role in DPS over the last few years. He forced the agency to streamline its finances and pushed the adoption of DNA as, in his words, the "fingerprint of the 21st century." And he's been valuable to the agency in being able to call D.C. to cut federal red tape and obtain funds.

He has been quietly political at DPS, playing a part, for example, in the Texas Rangers' revelation of FBI mistakes during the Branch-Davidian siege in Waco. The FBI did screw up, and deserved to be outed, but you can't help but wonder if the federal government's mistakes would have been made quite so public had a Republican been in the White House.

Speaking of the White House, Francis told the assembled leadership of the department that he is leaving because he'll be traveling a lot next year. It seems that not just the Army, but also President Bush, is calling up reserves for a hard campaign in 2004.