A Challenge for GOP Chair 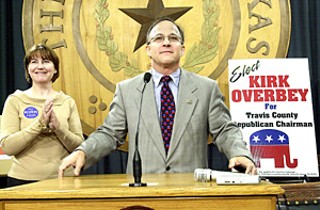 Kirk Overbey announces his candidacy for the chairmanship of the Travis Co. Republican Party at the state Capitol Wednesday morning. (Photo By John Anderson)

Charging that the Travis Co. Republican Party has been run like a party of "a small rural county" and has turned into a one-man show, longtime party activist Kirk Overbey announced last week that he plans to challenge Alan Sager for the party's chairmanship in the March 9 primary. "I feel in the last four years that the organization of the party has gone the wrong direction," Overbey told Naked City. "I've seen activists and volunteers ignored, I've seen the process of how the party is supposed to work ignored, and it pains me."

Overbey -- a precinct chair since 1990, a member of the State Republican Executive Committee from 1996 to 2000, and Travis Co. co-chair of the 1994 Bush for Governor campaign -- attacked Sager for having a "control issue" in his management style. "The incumbent has reduced the Party operation to that of one man relying on a few close advisors," Overbey charged in a press release. "The TCRP should be run the way an urban Party should be run, not as in a small rural county. ... The Party office, which was formerly in a publicly accessible location, has disappeared into the incumbent's personal business office." (Sager, a UT lecturer in government, also owns most of the Supercuts franchises in the Austin area.)

Overbey also criticized Sager for failure to file timely Texas Ethics Commission reports (thus incurring fines) and said Sager is an inadequate fundraiser. "He brought in Karl Rove for one successful fundraiser in 2000 ... but since, his fundraisers haven't been nearly as successful."

Sager chuckled at Overbey's allegations and defended the use of his business office as party headquarters. "We donated the space," Sager said. "That's the first complaint I've heard about the location." Asked if he would continue to donate the space if he loses the chairmanship, Sager replied, "No. I'm not planning to lose. There's no point in us paying for space when we don't need to."

As for the TEC reports, he laughed again, "A couple of years ago, when I was getting used to filing electronic reports, I paid a $200 fine. Is that really serious? ... Kirk has been contentious in the party since he's been around. He ran the party in the Nineties [as vice-chairman to Jan Galbraith] when we lost a lot of races we should have won. We have not lost a race we should have won in any Republican-oriented district since I have been chairman. [And] we've improved the quality of our candidates and made serious challenges to seats we had to reach for, like Precinct 2 county commissioner [Sherri Gallo vs. Democrat Karen Sonleitner] and senatorial District 14 [Ben Bentzin vs. Gonzalo Barrientos]."