The Wild and Crazy Sheriff

Tweet
print
write a letter
Two weeks into Williamson Co. attorney Gene Taylor's inquiry into possible misconduct by county Sheriff John Maspero, investigators have confirmed multiple allegations that the sheriff has been intoxicated in public -- which can be grounds for his removal from office under state law -- and are also challenging Maspero's account of events leading up to the Oct. 11 drunk-in-public incident that sparked the ongoing probe.

Georgetown police stopped Maspero as he walked on Williams Drive, off I-35 in Georgetown, just before 1am on Oct. 11, after getting two calls from motorists reporting a man "falling all over himself" as he walked down the road. The first caller said she was afraid the man, whom she described as drunk, would fall into the roadway; the second reported that the same man was urinating on the side of the road. While police determined that the man was both Maspero and certainly drunk, instead of ticketing him for public intoxication and/or urinating on the street, Officer Ben Runkle offered the sheriff a "courtesy transport" to a nearby home.

Maspero said he decided to walk home from a cookout earlier that evening because he had been drinking, which he noted should be considered a responsible decision. But less than a week after the incident, Taylor asked that Maspero resign his post -- pursuant to a provision of the Local Government Code that lists public intoxication as grounds for removing a public official from office -- or face an investigation and civil suit seeking his ouster. On Oct. 20, Maspero's attorney Ed Walsh told reporters that the sheriff was entering an alcohol treatment program, that he would not resign his post, and that he is looking forward to running for re-election in 2004. (Maspero already has at least two declared opponents in the GOP primary; this week, Williamson Co. GOP precinct chairs voted to call for Maspero's resignation.)

On Oct. 27, Taylor told Naked City that investigators have verified at least five other reports that Maspero has been intoxicated in public, and are still looking into other tips. "It seems like every time we check [on one tip] we get more stuff," he said. Further, Taylor said, information received by his public-integrity task force suggests that Maspero's decision to walk home wasn't motivated by a concern for public safety.

Investigators have been told that Maspero left the Chamber of Commerce cookout on foot after getting into an argument with a woman (presumably the recently divorced woman with whom he had been having an affair), who took off in the car, leaving the sheriff in her wake. "That's the information we're getting," Taylor said. "He acted like it was an optional thing that he walked, but he didn't have a ride." Nonetheless, Taylor said that Maspero could've asked any number of others for a ride -- including several sheriff's deputies who were also at the cookout.

"Well, Mr. Taylor is setting out some facts that I'm not aware of," Walsh said in response. "My position is that if [Taylor] is setting about doing this to bring a case to court, it is inappropriate for him to be spouting this stuff to the news media."

Meanwhile, on Oct. 24 Georgetown police released an audiotaped conversation between Maspero and police Chief David Morgan, who recorded it on Oct. 13 without Maspero's knowledge, during which Maspero suggests the two officials should together decide what to tell the public about the Oct. 11 incident. "My deal is, I don't think I was that drunk, but who knows," Maspero tells Morgan. "I think the best way to handle it is, 'He'd been drinking and we gave him a ride home.' I think that's better for you guys and it's certainly, certainly better for me." 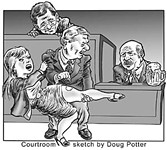