At Home With Capital Punishment

The fourth annual March for a Moratorium surrounds the Capitol. 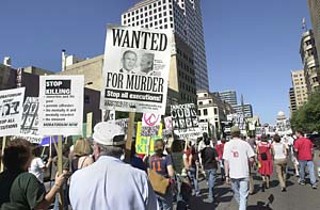 Following a march through downtown to the Governor's Mansion and the Capitol, a couple of hundred death penalty abolitionists gathered Saturday afternoon at what they called the third point on "the axis of evil" -- the Court of Criminal Appeals, where many wrongly convicted Texas defendants have had their cases run aground before the heavily politicized and prosecution-biased justices. While acknowledging this was a bad legislative year for Texas advocates of justice, David Attwood of the Texas Coalition to Abolish the Death Penalty insisted he remains undaunted, even optimistic. "We will win this battle," Attwood told the crowd, and recited the reasons he remains hopeful. "Over the last 10 to 15 years," he said, "we have gone from a handful of people to a movement of hundreds of people. When we began, all the state's major newspapers supported the death penalty; now several major state newspapers have either opposed the death penalty altogether, or at least called for a moratorium. Five or 10 years ago, not a single state legislator was willing to publicly oppose the death penalty. Now several have been willing to file bills calling for a moratorium. ..." That said, although a number of bills indeed proposed capital punishment reform, there was no legislative progress against the death penalty this year.

Nonetheless, Atwood's dogged optimism was echoed by Clarence Brandley, who spent nearly a decade on death row for a 1981 Conroe murder he did not commit. He was eventually freed after pressure from a combination of abolitionist activists, legal action, and investigative journalism. Brandley, now a minister in the Houston area, was eventually exonerated when courts found that the murder investigation had been biased against him from the beginning and had overlooked more likely suspects. In the words of the presiding judge who ruled in his favor, "The litany of events graphically described by the witnesses, some of it chilling and shocking, leads me to the conclusion the pervasive shadow of darkness has obscured the light of fundamental decency and human rights." Brandley told the crowd that he is living proof that "there are innocent men on death row," and declared, "We can abolish the death penalty."

Sandra Reed spoke of her son, Rodney, convicted in 1998 in the murder of a Giddings woman, Stacey Stites, on the basis of DNA evidence that Reed's family insists simply confirms that Rodney and Stacey were lovers. Reed pointed out that the rest of the physical evidence in the case points to other suspects, and that specifically Stites' fiancé, a Giddings police officer, failed two polygraph examinations on the question of his involvement in the murder. That evidence, as well as other exonerating evidence, was not admitted at trial. (For more on this, see "Who Killed Stacey Stites?" by Jordan Smith, May 24, 2002.) Reed said that her family's experience in the court system has led her to believe that it is rife with "corruption, deceit, lies, and greed."

Anita Babineaux described the case of Nanon Williams, arrested for a murder in 1992, when he was 17 years old. Williams' case has been caught up in the controversy now surrounding the Houston Police Department crime lab -- forensic evidence involving hundreds of crimes has been called into doubt by poor handling, sloppy records, and potentially criminal false or misleading testimony by forensic witnesses. The technician who initially provided the evidence supposedly connecting Williams' gun to the murder later retracted his own testimony, and the defense is trying, thus far in vain, to persuade the courts to overturn the conviction. "This was not a capital murder case from the beginning," said Babineaux, "and the so-called criminal justice system is an integral part of a system of racial and class oppression."

Jeannette Popp, who became an abolitionist activist in the aftermath of the murder of her daughter Nancy DePriest, took the occasion to declare her candidacy for state representative from Fort Worth, the District 99 seat currently held by Republican Charlie Geren. "I've got no money and no campaign manager," said Popp, "but I've got plenty of determination." She said it is time for ordinary Texans to try to take control of their own government. "We've got to save ourselves and our families," said Popp, "the human race, the state of Texas. I'm a proud Texan, and it hurts me to know that our state is known all over the world as the home of the death penalty."