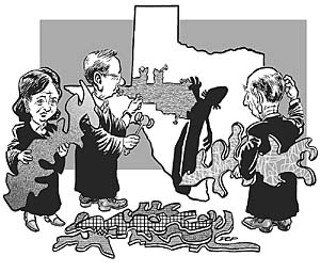 The Texas Office of the Attorney General under Greg Abbott has not set any speed records honoring open records requests, an agency point of pride as recently as the John Cornyn regime. Nevertheless, Abbott anticipates no delay in the federal approval of the GOP's newly incarnated congressional re-redistricting map. Spokeswoman Angela Hale says that her boss happily carried the map last week to D.C. and presented it to Department of Justice lawyers for preclearance under the Voting Rights Act. The DOJ normally allows three months to review new maps but, said Hale, "We anticipate DOJ taking approximately 60 days to make a decision. We feel confident the state's redistricting plan satisfies the Voting Rights Act and DOJ will preclear it." Hale has recent precedent in her favor; John Ashcroft's DOJ quickly ruled that the Senate's abandonment of the two-thirds rule did not require preclearance without so much as hearing arguments from minority senators who opposed the change.

Opponents of re-redistricting are increasingly pessimistic about the DOJ's likelihood of rejecting the plan. "If the agency's lawyers are allowed to follow the law," said Austin attorney Renea Hicks, who has represented Democratic legislators in the case, "the map is retrogressive [as to minority voting representation]. That's the test. But I'm not optimistic as long as John Ashcroft is attorney general. I believe that the process has been corrupted and politicized." Hicks said that even if the DOJ accepts the dubious Republican argument that the African-American District 9 in Houston effectively replaces the lost District 24 in Dallas, "We've gone from 11 minority districts to 10, because they shrunk the Hispanic vote in Henry Bonilla's District 23." But Hicks is not confident that the DOJ will come to that conclusion.

In that context, the next battleground is likely to be the federal courts, where no less than four lawsuits were filed last week opposing the new map. The Mexican American Legal Defense and Educational Fund filed suit in Victoria on behalf of the American GI Forum; in separate actions in a Marshall court, a group of East Texas Democrats has asked for a temporary restraining order against both the map and the legislative delay of the spring primaries; and another group affiliated with the Democratic congressional delegation filed suit in the Tyler federal court that drew the 2001 map to ask that the court maintain the current districts. "Under no circumstances," reads the plaintiffs' motion, "should the Court allow the new map to take effect without a prior determination that it is lawful and that the balance of relevant equitable considerations justifies a new map at this point in the decade."

It's not clear when the courts will consider the suits -- and there may be more to come -- but it is likely the Tyler court will end up consolidating the cases in some form. The Tyler pleading is on behalf of "the Mayfield Plaintiffs" (parties to the 2001 case), and it makes four arguments:

1) An injunction already in place requires use of the current map,

2) the court needs to judge the legality, equity, and necessity of the new map,

4) a new map should not be imposed just prior to the 2004 electoral cycle.

The 40-page motion, submitted to the U.S. District Court for the Eastern District, Tyler Division, argues at length that the new map is unnecessary, radically disruptive of communities of interest, and violates the VRA in several ways. According to published reports, the MALDEF lawsuit specifically addresses the disenfranchisement of Hispanic voters under the new map, and the Marshall lawsuit makes the same complaint on behalf of African-Americans in East Texas.

Although nobody is certain whether the new map will be in place for next year, several politicos are already jockeying for the starting gates. Burleson Republican Rep. Arlene Wohlgemuth fulfilled expectations Monday by declaring her candidacy for Democratic incumbent Chet Edwards' District 17. Similarly, Rep. Kenny Marchant, R-Coppell, has formed an "exploratory committee" for District 24 (the eviscerated Dallas district currently held by Democrat Martin Frost). During the re-map discussions at the Capitol, both legislators were often mentioned as likely beneficiaries of the new lines.

The new Travis Co. District 10, running from the Arboretum hard right to West Houston, is expected to gather a number of GOP hungries -- state District 51 Rep. Jack Stick has often been mentioned. But the first right shoe to drop was Mike McCaul, stepping down from the U.S. attorney's office (where he is in charge of counterterrorism, no less) -- also a line on Stick's résumé. McCaul is an insider GOP heavyweight (he formerly ran the AG's Criminal Justice Division under Cornyn) and likely to be rolling in campaign dough -- his father-in-law is Clear Channel Worldwide CEO Lowry Mays. And of course, out in Speaker Tom Craddick's hand-drawn District 11, Bush crony Mike Conaway is dusting off his signs from his spring loss to Randy Neugebauer (District 19) and ready to accept all GOP obeisance.

And should the new map leap all legal hurdles, Democrats will be maneuvering over the new "minority" District 25, running from Austin to McAllen. Current District 10 incumbent Lloyd Doggett would be the likely favorite, although state Sen. Gonzalo Barrientos says he would "keep his options open" for the heavily Hispanic seat. And Valley Dems are coalescing around Rep. Kino Flores of Mission, as McAllen's Juan "Chuy" Hinojosa says he intends to stay in the state Senate.

Reviving Bipartisanship
Can we bring a stop to these congressional redistricting debacles?

Cracking Craddick's Calendar
Judge gives Craddick until Jan. 12 to provide information to court to determine whether his private calendar contains details about public business that would warrant its release under open-records laws