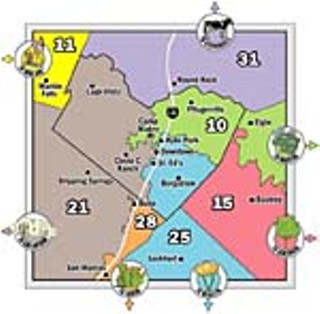 View a large scale map of central Texas' under the new redistricting map.

Contiguous! Compact! Communities of interest! Remember those words? Well, you can forget them now, just like the Republicans did. Instead, look at these pleasing and intriguing shapes. And weep. 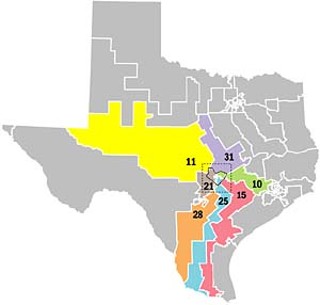 Central Texas is now the ass end of seven different districts, of which only one -- District 31 -- will likely have a congressman (currently John Carter, R-Round Rock) from the 512 area code.

The city of Austin is split into three pieces, each of which forms less than one-third of its new district.

Bastrop, Caldwell, and Hays counties are parceled out among five different districts; and the Highland Lakes now belong to Tom Craddick's Midland district.

It's up to the courts now to put the Texas puzzle back together. (You don't expect John Ashcroft to help, do you?) This isn't such a far-fetched hope. Pop quiz: Who said, "Bizarre shape and noncompactness cause constitutional harm insofar as they convey the message that political identity is, or should be, predominantly racial"? If you said "Justice Sandra Day O'Connor, in the 1996 Bush v. Vera decision that led to redrawing 13 Texas congressional districts," give yourself a gold star.

The districts thrown out in Bush v. Vera had boundaries (drawn by Democrats, under Martin Frost's tutelage) far more irregular than any on the new GOP map. They were designed to capture every single black, or Hispanic, or white Republican vote in Dallas and Harris counties -- down to the block level -- and assign it to its proper district. (The Lege had just acquired its cool redistricting software, and you know what happens when people get new toys.) But the GOP challenged 24 of 1991's 30 congressional districts, and only three made the Supreme Court choke. (Ten more adjacent districts had to be redrawn to fix the bad three.) Why? Because Frost et al. argued that their aggressive demographic segregation actually united communities of interest -- while protecting incumbents and partisan interests, but there's no law against that.

The 10 blue districts are the new Democratic cantons -- all are majority-minority.

The 12 red districts are the hardest-core GOP strongholds.

In the middle, the 10 yellow districts are also pretty damn Republican but offer some slim hope to Democrats -- often because minority communities have been stranded within them.

The GOP has done the opposite -- dismantling communities of interest to meet its partisan needs, and nowhere more glaringly than here in Central Texas, which will soon be the ass end of seven different districts but may have only one actual member of Congress. Yes, the Balkanization of Austin may be unprecedented not only in Texas but the nation, but forget about that for now. Instead, pretend you're Sandra Day O'Connor and contemplate why Dripping Springs, San Marcos, Lockhart, Bastrop, and Elgin are each in a different congressional district. You'll quickly discern "the message that political identity is, or should be, predominantly racial," since there is no other reason for drawing these weird snakelike districts from here to Mexico. (There's no way to drive from Hyde Park to McAllen -- the extremities of the new District 25 -- without leaving the district multiple times.) All five towns are currently represented in the Legislature by white Democrats, but in Tom DeLay's ideal Texas, there are no white Democrats. You have to choose. Under the new map, Dripping Springs and Elgin become white suburbs, but not white Austin suburbs; the other three become border towns, but at least they remain Democratic.

While you're channeling Sandra Day O'Connor, think back to her opinion last summer in Georgia v. Ashcroft that the Voting Rights Act protects minorities even when they aren't packed into all-nonwhite cantons, and that the support of minority legislators for a redistricting plan is "significant" to its VRA analysis. Then look at the large minority communities in Fort Worth, Beaumont, Galveston -- and Austin, too -- that are now stranded in GOP suburban paradise, and note how all the minority members of the Senate, and nearly all of the House, not only voted against this crap but fled the freaking state to try to kill it. The Texas 11's spin points about "1 million minority Texans" losing the franchise were, if anything, too cautious.

In all, eight districts -- 2, 10, 14, 15, 23, 25, 26, and 28 -- may, more or less shamelessly, violate the VRA, and the Supremes' inevitable tussle with the new Texas map may settle issues raised in both Bush v. Vera and Georgia v. Ashcroft. But what about the rest of these districts, like the antique-video-game monster that is District 19, or the forced mating of rural Texans with their distant big-city cousins in Districts 5 and 6? Shouldn't something as stupid as splitting Fredericksburg from Kerrville, and pairing them (respectively) with Midland and (half of) Laredo, be against the law? Well, it ain't. But soon it might be.

In December the Supremes will, for the first time in 17 years, hear a redistricting case -- from Pennsylvania -- that doesn't involve the Voting Rights Act, but instead alleges purely partisan atrocities. Back in 1986, four justices -- all gone now -- held that yes, one party could screw the other so badly as to violate the 14th Amendment, but only in the most extreme cases. Three more justices -- including O'Connor and William Rehnquist -- thought it impossible for a political gerrymander to be unconstitutional. So this has been what you'd call a settled issue. Why take it up again now -- before the Texas bullshit inevitably hits the Supreme Court fan? Perhaps to re-establish that "traditional redistricting principles" -- contiguous, compact, etc. -- are themselves required, and not just desired, in a democracy ruled by law.