Coffey -- Officer of the Year 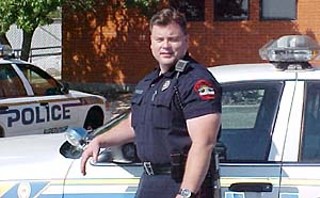 Less than a week after city officials declined to release the details of the completed independent investigation into last year's fatal shooting of 23-year-old Sophia King by Austin police officer John Coffey, the Austin Police Association announced that Coffey has been named "Officer of the Year" by the APA and the Combined Law Enforcement Associations of Texas.

On June 11, 2002, Coffey fired the shot that killed King as she lunged toward Housing Authority Manager Diana Powell, reportedly while holding a knife, behind King's apartment in the Rosewood Courts in East Austin. While it's regrettable that the shot killed King, it also saved Powell's life, said APA President Mike Sheffield, who was one of two officers who nominated Coffey for the award. "John saved someone's life, and you can't get more extraordinary than that," Sheffield said in the union newsletter The Police Line. "Choosing Coffey was a no-brainer."

Despite the fact that King had a history of schizophrenia, was living alone in the Rosewood Courts, was not receiving any ongoing mental health services to help her deal with her illness, and had a history of being involved with disturbances requiring police and mental health intervention, Coffey has borne the brunt of criticism for the fatal shooting. In the Police Line article, Coffey -- who said "I did what I was trained to do. ... If there would have been anything else I could have done, I would have" -- reported that his family received death threats and his children were harassed at school during the months after the shooting. "It wasn't fair or right that they had to suffer," Coffey said.

Coffey was cleared by APD's internal investigations, no-billed by a Travis Co. grand jury, and apparently also cleared by the still-secret independent probe initiated by the Office of the Police Monitor. But not surprisingly, the recent recognition of Coffey -- who was initially nominated by Sheffield and C.L.E.A.T. board member Todd Harrison back in July -- hasn't gone over well with some who still find the honor unseemly. "They're awarding themselves for killing someone," said Texas Civil Rights Project Director Jim Harrington, who is representing King's mother, Brenda Elendu, in a wrongful-death suit against the city. "[Elendu] is really upset. This stuff just totally flips her out."