Supremes Turn Down Perry and Dewhurst

The Texas Supreme Court rejects Perry and Dewhurst's request for a writ of mandamus against the fugitive Senate Democrats. 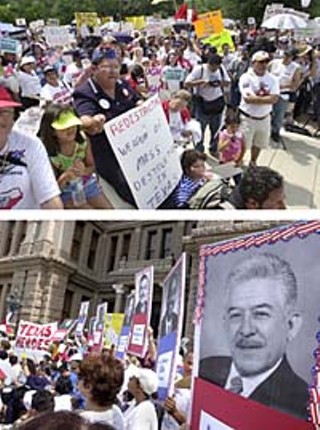 About 5,000 Texans from around the state converged on the Capitol Saturday to condemn the redistricting jihad and support the 11 state Senators who went to New Mexico to break quorum. (Photo By John Anderson)

The 78th Legislature's battle over congressional re-redistricting has shifted to the courts, though on Monday the Texas Supreme Court rejected Gov. Rick Perry and Lt. Gov. David Dewhurst's request for a "writ of mandamus" under which the court would provide (unspecified) sanctions against the 11 Senate Democrats who prevented a quorum July 26 and fled to Albuquerque. Perry and Dewhurst had requested the writ Aug. 7; lawyers for the Democratic senators filed their response at noon Monday, Aug. 11. The court issued its rejection, without comment, a couple of hours later. Three justices -- Priscilla Owen, Nathan Hecht, and Steven Smith -- issued a concurring statement but said the decision is "without regard to the constitutional merits of the argument."

Perry issued a statement saying he was "disappointed" with the court's refusal to intervene to resolve a "constitutional crisis," arguing that unless there is a "legal resolution, this constitutional abuse will be used in the future to again bring our government to a halt." Dewhurst, also disappointed that the court had taken no action against the "Texas 11," said he would ask the remaining members of the Texas Senate to do so. "The court's denial of our writ clarifies that the issue is a legislative matter that only the Legislature can and should resolve. ... Accordingly, when the Senate convenes on Tuesday, I expect that senators will consider appropriate measures against absent members ... for the purpose of compelling their attendance." Late Tuesday afternoon, after three hours of a private meeting off the Senate floor, 17 senators still in Austin (two excused absences) emerged and voted to sanction their missing colleagues by fines beginning at $1,000 a day, rising to $5,000 a day for the remainder of the special session, and to be paid from private funds. Only Victoria Democrat Ken Armbrister voted against the resolution. (For more, see "Naked City," p.17.)

Austin attorney Renea Hicks, representing the Democratic senators, told reporters that forcing the missing members to attend the Senate solely to provide a quorum to pass a new congressional map they oppose is "tantamount to [requiring them to vote] for congressional redistricting." On Monday morning, the senators-in-exile filed their own lawsuit against Perry and Dewhurst in federal court in Laredo, arguing that the lieutenant governor's decision to abandon the Senate's traditional two-thirds rule -- requiring 21 senators (there are 19 Republicans) to agree to bring a bill to the floor -- constitutes a change to Texas' prior "standards, practice, and procedures" governing elections, and is therefore subject to preclearance by the U.S. Dept. of Justice under Section 5 of the federal Voting Rights Act. Hicks, hired to represent the senators by the state's congressional Democrats, told a press conference Monday that there is a "direct relationship" between the two-thirds rule and the voting rights of minority Texans, especially since all but one of the senators in Albuquerque represent majority-minority Senate districts. (The sole exception is our own Sen. Gonzalo Barrientos; his Dist. 14 is only 45% minority.)

Over the weekend, some Democrats expressed concern that the all-Republican Supreme Court might base its decision in partisanship. In a Friday press conference, House Democratic Caucus chair Jim Dunnam of Waco had described the separation-of-powers doctrine as "Constitutional Law 101," and said that if the issue were not so heavily political he would lay "20 to 1" odds that the court would reject the governors' request for a writ. But Hicks' colleague Chip Babcock noted he has worked closely with all the justices and was convinced "there's not a chance in the world [a partisan decision] will happen." Babcock proved the better prognosticator.

Hicks admitted that the separation-of-powers doctrine could also invalidate the Democrats' counterargument that the GOP's desire for more Republicans in Congress does not meet the Texas constitutional standard of "extraordinary occasions" that justify special called sessions. "What's sauce for the goose," he said, "is sauce for the gander." Asked whether filing a federal lawsuit in Laredo constituted "forum-shopping" -- an accusation Dewhurst made last week -- Hicks answered, "Sure. We filed in South Texas, an area where the injury to minority voting rights is centered, and where we can expect a judge to be sensitive to the Voting Rights Act."

Back in Albuquerque, the senators released a letter they had written to President Bush, calling upon him as both the president and the national GOP leader to "stop the Texas Republican Governor and his cohorts from his invidious discrimination against minorities and his disenfranchising minority and rural voters via redistricting." The senators said they understood that Bush's chief political advisor, Karl Rove, "has played a significant behind-the-scenes role in this divisive and unfortunate overreach of legislative power," and that they feared the redistricting was intended to ensure a Republican-dominated Congress that would in turn "weaken or repeal the Voting Rights Act in 2006."

The senators added that the re-redistricting was inconsistent with Bush's oft-boasted bipartisanship and his oft-declared desire that the Republican Party reach out to Latino voters; they continued, "Your continued silence is being interpreted by thoughtful Americans as complicity or tacit approval." They called on Bush to tell Perry, Rove, and U.S. House Majority Leader Tom DeLay to "end this embarrassing chapter in Texas history," adding, "Your strong public stand would be sufficiently dramatic to send the appropriate signal of your fairness to the American people."