After 40 Years of Hard Labor, Joe Gunn Steps Down 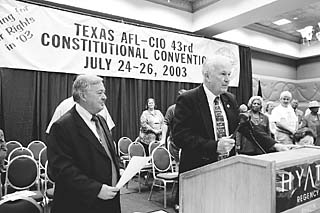 Joe D. Gunn stepped down from the presidency of the Texas AFL-CIO last week, his name -- just plain "Joe" -- a measure of the man's unpretentiousness and approachability. Gunn, 72, had been president of the state union federation for 14 years, but had begun speaking out for workers as a union rep with the Communications Workers of America in June of 1962. Gunn said that while he will still work on behalf of labor causes and act in an "advisory" capacity, he thought it was time to retire to spend more time with his family, and that "maybe it's time for a new face to sit on our side of the table." At the federation's annual convention held at the Hyatt Regency last week, Secretary-Treasurer Emmett Sheppard was unanimously elected to the presidency, and Becky Moeller of Corpus Christi was elected to succeed Sheppard.

Describing his mixed emotions upon retirement, Gunn rolled out the old vaudeville chestnut: "Well, it's kind of like watching your mother-in-law drive over a cliff in your Cadillac." Gunn has relished his years as the chief spokesman for the labor movement in Texas, representing over 200,000 Texas workers, and his personal motto is now legendary: "Dignity is a right, not a privilege." His work in the CWA began in Houston, where he was born and raised ("I've never wanted to live anywhere but Texas, and except for the Grand Canyon, there's not much else I care to travel to see"). He said he learned early on that in organizing workers, the most important thing was "to show you could do real things to help them." He recalled winning a grievance for one worker, "with a wife and two kids at home," after the company refused to take responsibility for an on-the-job back injury. "You showed what you could do for somebody," Gunn said, "and the workers would want to join."

Gunn was also famous for canny publicity to spread the word. Federation spokesman Ed Sills said once Gunn toured with a donkey, symbolizing Southwestern Bell's stubbornness; another time, Gunn said, "I asked workers to show up for the job wearing a button that said, 'Ma Bell is a Cheap Mother.' They all got sent home, but everybody knew what was going on." The tactics were effective -- from 1962 to 1973, Gunn's multistate CWA local grew from representing 2,900 members to 9,500.

Sheppard says he's not going to let Gunn wander too far away from union matters; he indeed hopes to get his help organizing retired workers, "the biggest local available," using his predecessor's contacts and experience as well as computer tools not readily accessible to the federation just a few years ago. "Joe's been one of the best leaders union members have ever had, and we want to build on his leadership. We're going to try to be a little proactive on issues that are not just important to union members, but to all retirees and their families -- the Republican attacks on Medicaid and Medicare, the attempts to privatize Social Security."

Both Gunn and Sheppard acknowledge that it's a tough time for labor, in Texas and internationally. "These so-called 'free trade' laws, like NAFTA [North American Free Trade Agreement] and FTAA [Free Trade Area of the Americas]," Gunn said, "are simply shipping U.S. jobs overseas, especially in manufacturing. We may not be exporting more jobs than anything else, but it's close. Those jobs are not coming back, and I want to ask, 'Who's going to buy those products made overseas by cheaper labor'?" The difficulties for organizers are exaggerated in Texas, a "right-to-work" state -- meaning that workers receiving union benefits cannot be required to pay union dues -- and the corollary that national AFL-CIO administrators are reluctant to spend money on organizing those states.

Despite those difficulties, Louis Malfaro of Education Austin -- who calls Gunn "a real mentor," and who was installed as a new vice-president at the convention -- says he sensed an increased vigor and anger among the delegates. "People are pissed off," Malfaro said, "at Congress and the Legislature, and they want to translate that anger into electoral action. That's labor's greatest challenge."

AFL-CIO general counsel Rick Levy says that no matter the direction labor takes, Joe Gunn will remain a hero. "He has been extraordinarily single-minded in his dedication to the cause of representing working people," Levy said. "They gave me the job of 'introducing the dignitaries' at the convention banquet held in Joe's honor. So I asked the members of his CWA local to stand, and then all the CWA to stand, and finally all the union members in the audience. And then I said, in all truth, 'To Joe Gunn, you people are the dignitaries.'"