The conservative Christian church seeks a federal loan for an amphitheatre at its 51st St. campus 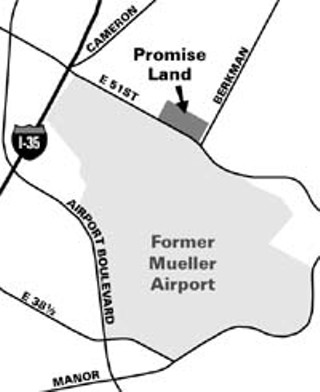 At PromiseLand, federal urban-development dollars are slated to pay for an amphitheatre at the conservative evangelical church.

Located on a sprawling campus just north of the old Robert Mueller Municipal Airport, the PromiseLand Church beckons all souls to pull into its parking lot and praise the Lord in the Pentecostal tradition. That involves a lot of singing: Worship at PromiseLand is about as rocking and rollicking as church gets, with backup bands, full choirs, and stage lighting augmenting the sermons and prayers. Underlying PromiseLand's lively music offerings is a conservative Christian message influenced by groups such as Focus on the Family -- recognizing only heterosexual marriage, promoting abstinence pledges for teens, and encouraging the belief that gays and lesbians can be converted to heterosexuality.

To each church its own -- except that PromiseLand now hopes to use tax dollars to open its doors wider to the community. This year Heart at Home, a youth-focused nonprofit that uses PromiseLand's address and includes pastor Randy Phillips as board president, has applied to the city for a $300,000 federal loan, subject to Austin City Council approval, to build a new, 2,000-seat amphitheatre and 3,600-square-foot stage directly behind PromiseLand's church facilities at 1504 E. 51st. PromiseLand has donated property worth $900,000 for the one-acre amphitheatre complex, estimated to cost $1.4 million. Heart at Home, which would own and operate the amphitheatre, expects private donations to make up for the $200,000 in construction costs not covered by their request to the city for a seven-year zero-interest Community Development Block Grant (CDBG) loan. The group expects to repay the loan through event ticket sales, rental fees to community groups, and concessions.

"I wanted it to be far greater than a church project -- a community project," says Phillips, who conceived of the amphitheatre two years ago as a way to bring the performing arts to the disadvantaged, particularly East Austin youth. The facility would also serve large organizations: In its 12-year history, Heart at Home (using PromiseLand buildings) has hosted events for the Austin Police Dept., the Vietnamese community, the Muslim community, and many other groups, Phillips points out. "It won't all be religious," he says of the new facility's programming.

While Phillips is a charismatic speaker who connects with PromiseLand's diverse congregations with a youth-ministry message that is at times fairly progressive, the church's current of Christian conservatism worries opponents of Heart at Home's request for public funds. "Even if they make [the amphitheatre] available to gay and lesbian people, they'll make it miserable for us," says Metropolitan Community Church of Austin Pastor Ken Martin. "They'll be standing there, trying to convert us [to heterosexuality]."

To receive its loan, Heart at Home will have to comply with federal guidelines requiring that the entire community enjoy access to the facility. Though Phillips says his organization is happy to play by the rules, an April 2001 letter written by city staff to Phillips shows that at the time, he and other Heart at Home members acknowledged that PromiseLand "may have objections to the use of [the] amphitheatre by groups whose values or mission are not aligned with those of the church."

Final approval of Heart at Home's CDBG loan application would occur when the city finalizes its budget in September; prior to that, the city must submit its federal-funding "action plan" to the U.S. Dept. of Housing and Urban Development, which administers the funds, by Aug. 15. Despite Heart at Home's Christian orientation -- or maybe precisely because of it -- several key city officials and stakeholders have expressed support for the amphitheatre, including City Council Member Danny Thomas and Austin Police Dept. Chief Stan Knee. The city's Neighborhood Housing and Community Development office has supported preawarding the loan, though office spokeswoman Julie Beggs says "there's no guarantee" Heart at Home will receive it. "They have to meet the guidelines," she emphasized, adding that Heart at Home also has yet to turn in all necessary documents supporting its application.

The Windsor Park Neighborhood Association, whose territory includes PromiseLand, provided a letter of support based on certain conditions, including potential neighborhood impacts such as noise and traffic, and keeping the facility accessible to all community residents. Meanwhile, the council-appointed Community Development Commission, which makes recommendations to council regarding CDBG funds, recommended council reject Heart at Home's loan application. If the amphitheatre underperforms financially, the city will have to repay that money to the feds, says Commission Chair Sabino Renteria. "As big as [PromiseLand is], they should be able to finance it themselves," he said. Renteria says he and the commission would prefer to see CDBG funds used for other needs, like affordable housing.