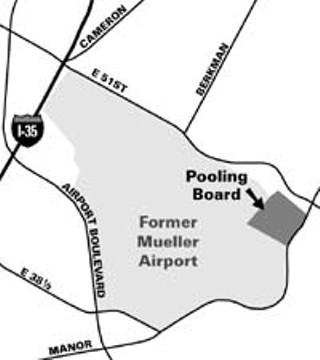 The state, city, and private sector have their sights on the State Aircraft Pooling Board site currently leased by filmmaker Robert Rodriguez.

Multitalented though he may be, Austin's favorite-son filmmaker Robert Rodriguez does not fly his own plane. But former House Speaker Pete Laney does, as the world and the Dept. of Homeland Security are now well aware. So does Laney's buddy and fellow ex-Speaker Bill Clayton, and together, the two West Texas politicos helped create and keep alive the State Aircraft Pooling Board, an in-house charter airline for state agencies. The Pooling Board's days are now numbered, and the fate of its assets -- including the space leased by Rodriguez for his studio complex at the old Robert Mueller Municipal Airport -- is, well, up in the air, making for some unexpected turbulence and dramatic star turns last week on the floor of the Texas Senate and in the neighborhoods around Mueller.

Back when Mueller was still open, in 1997, the city knuckled under to threats by Clayton and (sotto voce) Laney, along with other state leaders and the politically savvy private pilots' lobby, and agreed not only to gold-plate the Pooling Board's new facilities at Bergstrom, but to give the state first dibs on 282 acres of the 711-acre Mueller site. Mueller neighbors have lived in terror of the state and the Pooling Board ever since. While the state later abandoned the plans for its grand complex, the Pooling Board retained ownership of its 22 Mueller acres; once Mueller really and finally did close (1999), the board leased out this now-surplus property in an attempt (common among state agencies in this situation) to head off pressures to unload it entirely. Enter Robert Rodriguez, at the time only a moderately famous young filmmaker, who turned the Pooling Board's hangars into the studio space that's now home to the mushrooming Spy Kids franchise. (Austin Studios, the nonprofit film complex operated by the Austin Film Society, occupies a different set of old Mueller hangars, formerly used by private small-craft operators and west of the Pooling Board site.)

Flash-forward to this session, where a GOP leadership undisposed to supporting Pete Laney's pet projects, and facing a 100-year flood of red ink, quickly made clear its desire to deep-six the Pooling Board and sell off its assets. The attempts to do this during the regular session were, ironically, killed off by Laney's famous flight to Ardmore, among other legislative confusions; a frustrated Gov. Rick Perry line-item-vetoed the board's budget when he signed the state appropriations bill, but that didn't actually abolish the agency or dispose of its planes or facilities. The Pooling Board was the first of the 28 items Perry added to the call of the just-concluded first special session.

As it passed the House, HB 82 (by Hamric) of the special session would have surplused the Mueller site and transferred it to the General Land Office to be put on the open market -- or (after an amendment by Rep. Dawnna Dukes, in whose district Mueller lies) to be sold to the current lessee (Rodriguez), or to the city, or Travis Co. (the latter having expressed a desire for a chunk of Mueller land just about this size), or to an adjacent property owner, which in the long term would likely mean Catellus Development, the city's prospective private-sector partner in its Mueller redevelopment project. Another adjacent property owner, though, is the Texas Dept. of Transportation, which owns the site of the emergency communications center -- aka the RDMT (for "radio dispatch and mobile trunking") or, to the neighbors, "the Bunker" -- being built between the two sets of hangar-cum-studios.

TxDOT definitely wanted -- and still wants -- three of the 22 Pooling Board acres to "square off" the RDMT site. But two funny things happened on HB 82's way to the Senate. First, Sen. Robert Duncan, R-Lubbock (whose district, for what it's worth, is home to both Clayton and Laney), decided that while abolishing the Pooling Board was a done deal, the state could simply transfer all the board's operations and assets to TxDOT, thus pretty much gutting Hamric's bill. (The Senate committee substitute to HB 82 simply goes through current statutes and changes "the board" to "the department.") Second, according to Mueller observers, TxDOT made it be known that it could use those additional 19 acres for something -- like, say, storing asphalt, or parking construction vehicles. (Other bills under discussion, both in the regular and the special sessions, would have forced TxDOT to sell its facilities on Bull Creek Road -- and specifically hold out the Pooling Board site as an alternative.)

Given that relations between TxDOT and the Mueller project have already been frayed by battles over the Bunker, this prospect did not make either the city or the neighbors very happy. However, when Sen. Gonzalo Barrientos tried to insert an equivalent of Dukes' amendment into the Senate version, he was shot down on party lines, leading to a first-class display of floor histrionics from the Austin veteran. By the following day, Barrientos, Perry, the city, and TxDOT were all on board with a compromise proudly touted by the senator. "This snuck up on us a little bit, but my gut told me to slow this thing down and get all the players together to sort things out," Barrientos noted in a press release.

Under the Barrientos amendment, TxDOT would get its three acres -- and not be allowed to use it for storing fuel or vehicles -- free and clear. The other 19 acres would be available for eventual purchase by the city, or Catellus, or Rodriguez. The fact that Rodriguez's latest movie opened at No. 1 this very week was reportedly not lost on TxDOT or other state leaders, and Mueller backers -- who see the film complexes as a powerful asset to the mixed-use "urban village" redevelopment plan -- know what they'd like to see. "If Robert makes it known that he's interested -- even if he's not ready to buy it now," said one Mueller observer, "then this whole problem quickly goes away."

However, yet another sequel, featuring yet another plane flight -- "Killer Ds II: Game Over!" -- left the amended HB 82 to die on the floor of the House at the end of the abruptly sine-dead special session. Presumably, the deal can be revived and made final when and if we once again have a Legislature.