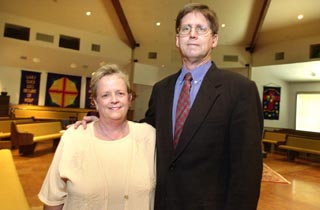 Every Sunday, members of St. Andrew's Presbyterian Church pray for a bicoastal lawyer who has mounted a fire-and-brimstone crusade against their pastor, the Rev. James Rigby, for being an ally of gays and lesbians.

The lawyer and complaining witness, Paul Rolf Jensen, appear to have turned a campaign against homosexuality into a full-time job. Last month, Jensen succeeded in ousting a Cincinnati pastor from the Presbyterian ministry for marrying same-sex couples. Jensen, who has addresses in Virginia and California, has filed similar allegations against other church leaders, and Rigby, a longtime friend of progressive causes, is the latest to land on Jensen's hit list.

Jensen alleges that Rigby violated the church's Book of Order when he ordained Suze Miller, an out lesbian, to the position of elder at the North Austin church. Jensen could not be reached at press time and did not respond to an e-mail seeking comment, but in a June 10 letter to Rigby, he accused the pastor of violating church laws by knowingly ordaining "an unrepentant self-proclaimed, practicing homosexual" to the position of elder. Jensen also reminded Rigby of a similar complaint that he filed with the Presbyterian Church (USA) -- the Vatican of U.S. Presbyterians -- which ultimately led to last month's expulsion in Cincinnati of the Rev. Steve Van Kuiken. And Rigby, Jensen's letter pointed out, could go the way of Van Kuiken if the church's governing body so deems.

Rigby's response? Bring it on. The pastor, who also serves on the boards of the Texas Freedom Network and SafePlace, says he welcomes the opportunity to challenge Jensen's accusations. Moreover, Rigby says he has received calls from other lawyers across the country eager to fight this battle on a pro bono basis. "This will give people an opportunity to express solidarity ... to come forward and say, 'We really don't want prejudice in the church.' And to me, there really is no question that this is bigotry."

Miller, whose recent ordination as elder started Jensen on his latest crusade, laughs at the irony of finding herself in the middle of what has become a national controversy in the Presbyterian Church. "My only surprise is that he named me," she said, referring to her typically low-key, low-profile demeanor. "My partner, Babs Miller, is the politically active one." (Babs Miller -- their shared last name is coincidental -- is a nonordained Presbyterian minister who co-founded the Texas chapter of That All May Freely Serve, a national group promoting the inclusion of gays and lesbians in the Presbyterian Church.)

"Our church, like many churches like ours, is so welcoming of everyone, although it is primarily made up of straight parishioners," Suze Miller continued. "This complaint is just silly. ... I don't know how else to explain it. It makes you wonder why he is so afraid -- bless his heart."

Other than making a name for himself as the ultraconservative watchdog, little is known or has been written about Jensen's life apart from his personal crusade. A 2002 New York Times article on another of his allegations -- that one directed at a Greenwich Village minister -- noted that Jensen is a staff attorney for the Republicans on the U.S. Senate Committee on Public Works and the Environment.

Some believe that Jensen's drive is part of a larger effort by conservative Presbyterians to thwart any other attempts to try to change church policy to allow the ordination of gays and lesbians as pastors and to other offices. Before the Jensen crusade, the national office was more willing to overlook those ministers who are now being looked upon as lawbreakers.

Van Kuiken's ouster from his Cincinnati church may be the first in a long line of expulsions to follow. But Rigby is undaunted. His goal, he says, is to get the Presbyterian Church and its leaders to stop projecting their culture onto others who don't fit their idea of the nuclear family. "There's not an American 'nuclear family' anywhere in the Bible," Rigby said. "You don't judge people by their flesh; you judge them by their spirit. It's Christianity 101."