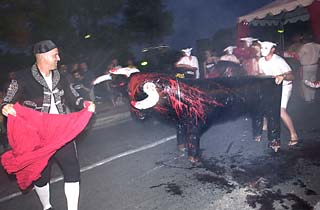 Austin had its own Running of the Bulls on Saturday -- but considerably less dangerous and for a much better reason than the real thing. Fourteen papier-mâché, life-sized bulls "chased" Austinites down Trinity Street in a fundraiser for the Arc of the Capital Area, a major charity for mental retardation. Here, matador Stewart Ford brings down one of the brutes. (Photo By John Anderson)

As of Wednesday, le Lance Armstrong de Austin is still wearing the yellow jersey indicating the frontrunner in le Tour de France, as he attempts to tie the record of five consecutive Tour victories held by Miguel Indurain. For local folks getting into the bicycle spirit, see Happenings.

The Bush administration continues to deny that the president ("the intelligence I get is darn good intelligence") misled the country when he described a nonexistent Saddam Hussein WMD uranium-procurement program in his State of the Union address. That is, they say it was Central Intelligence Agency head George Tenet who approved that sentence. Or if he didn't approve it, Vice-President Dick Cheney did. And the rest of the speech was accurate, anyway. Sort of. Hey, how about them evil Iranians?

State Judge Charles Campbell dismissed Fort Worth Dem state Rep. Lon Burnam's lawsuit against the Dept. of Public Safety over document destruction in the wake of the "Killer D's" manhunt, but Campbell also ruled that the DPS does not possess "legal authority to track down and arrest" fleeing legislators. Speaker Tom Craddick had deputized the DPS troopers under House rules that Campbell says directly conflict with the agency's powers under state law. If Gov. Perry fulfills his threat to call another special session -- and a dozen or more senators skedaddle -- the ruling may not be moot.