Dist. 45's Patrick Rose is one of a group of rural Democrats targeted for elimination 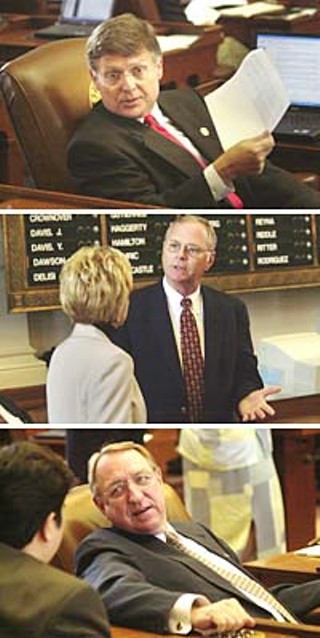 There are 62 Democrats in the Texas House. Forty-three are Hispanic or African-American -- most of those representing urban areas or South Texas. Nineteen are white -- or "Anglo," a catchall Texas term that stretches to include Austin Rep. Elliott Naishtat, who is Jewish and originally from New York, as well as former Speaker Pete Laney of tiny Hale Center in far West Texas.

The first thing one notices about the 19 is that they're all men. There were five white female Democrats in the House in 2001, including longtime incumbents like Galveston's Patricia Gray and Houston's Debra Danburg as well as freshman Austin Rep. Ann Kitchen. All were successfully targeted for elimination by the GOP, either via the 2001 legislative redistricting, a heavy influx of campaign cash, or both.

Laney, a House member for 30 years, is among the dozen or so remaining white Democrats who represent mostly rural districts (see map, below). This session the group has become known informally as the "WD-40s" -- white Democrats over 40 years old -- in the wake of a joke improvised by Laredo Rep. Richard Raymond during the House budget debate. "What do you guys think about that?" Raymond recalls asking nearby colleagues Dan Ellis of Livingston, Robby Cook of Eagle Lake, and Allan Ritter of Nederland. "What's the position of the WD-40s?" The nickname stuck and even gained a bit of comic notoriety after the WD-40 Company sent a "cease-and-desist" letter complaining of potential trademark violations. Republican "Rural White Boys" Rick Hardcastle of Vernon and Dennis Bonnen of Angleton and San Antonio Dem Trey Martinez Fischer responded on the WD-40s' behalf, suggesting among other things that the company instead be thankful so many rural Texans use its products.

The term is at best imprecise and depending on whom you ask, may include as few as nine or as many as 13 reps -- call it a baker's dozen. Several more-or-less rural white Dems are not quite 40 -- John Mabry (Waco) is 34, Jim Dunnam (Waco) and David Farabee (Wichita Falls) are 39, and Patrick Rose (Dripping Springs) is only 25. Raymond says, "Before I moved to the big city of Laredo, I had represented only small Texas towns. And I guess I could also be an honorary member," the Mexican-American representative added with a grin, "because I'm half white."

The term "WD-40s" -- white Democrats over 40 years old -- has been loosely applied to a group of Texas House Democrats representing primarily rural swing districts that voted Republican in the presidential or statewide elections but for Democrats in Congress (and these House seats). The map shows 13 such districts around the state that loosely fit the category, although Craig Eiland's Dist. 23 and Jim Dunnam's Dist. 57 are less rural and Republican than most of the others, and Patrick Rose (Dist. 45) and John Mabry (Dist. 56) are several birthdays short of 40. The rural Democrats have opposed congressional redistricting because of its expected dilution of the rural vote, and they are expected to be primary targets of the GOP in the next election cycle.

Laney notes that in addition to representing rural areas all over Texas, the dozen Dems are in swing districts like his own heavily Republican Dist. 85, and the state GOP has made clear it intends to target those members particularly for defeat in the next election cycle. "I don't think there's any question of that," said Laney. "They issued a press release this week for a [Republican] fundraiser, saying they intend to eliminate 'at least 10' Democrats in the House."

Slowing Down the Process

The battle over congressional redistricting increased the heat on the swing-district representatives, especially when they joined the "Killer D's" -- the group of 51 Democrats who on Mother's Day headed for Oklahoma to break the House quorum and prevent a vote on redistricting. They realized they were taking a political risk, but when they saw what the Republican maps did to their congressional districts -- radically diluting rural votes by anchoring the districts in straight-ticket Republican suburbs of Dallas or Houston -- they didn't hesitate to join the exodus. During the week they spent in Ardmore, the rural Dems were targeted by radio ads and automated phone calls encouraging voters to call their offices and complain that they had abandoned their jobs and needed to get back in Austin. Laney says the negative publicity worked at first, but now that people have been "enlightened to what is happening" with their congressional representation, "75% to 80% of the people are opposed to redistricting."

David Farabee of Wichita Falls says that in going to Ardmore, the Democrats accomplished what they set out to do. "We knew we couldn't stop redistricting altogether, but we wanted to slow down the process long enough so that people would have time to understand what is going on -- and we did that," Farabee said. "My own congressional district [Dist. 13, represented by Republican Mac Thornberry] would not change much. But when I considered the interests of people in my district, especially in agriculture and military affairs, I wanted to defend Charlie Stenholm and Chet Edwards, who are ranking members of those committees." (Farabee says he estimates that after Ardmore the Republican Party spent $12,000 in his district just on radio ads attacking him.)

Chuck Hopson of Jacksonville says with a laugh that his Republican colleague Ed Kuempel of Seguin addresses messages to him as "Dear Endangered Species." "People in my district vote the person, not the party -- some who voted for me tell me, 'I didn't even know you were a Democrat.' They voted Republican for statewide offices, and they voted 60% for Bush -- but for Congress, in the courthouses, and for state reps. they'll vote for Democrats."

"I oppose redistricting because it's bad for rural East Texas, and that's why we went to Ardmore," Hopson said. "People have a strong work ethic in East Texas, but when they understand why we did what we did, they support us -- because we did the right thing for our districts. The testimony at the Nacogdoches field hearings, and all across the state, was overwhelmingly against redistricting."

The representative whose situation is perhaps most similar to that of Patrick Rose is John Mabry of Waco, also a young freshman Democrat who won a very close race against a Republican incumbent to represent a largely rural, Republican-majority district. (His colleague and law partner Jim Dunnam also represents a Waco-area district, but it is more urban and majority Democratic, so Dunnam's membership in the WD-40s is somewhat honorary.) "When people testified at the Senate redistricting hearings in Waco, they would say, 'I voted for George Bush, and I voted for Rick Perry, but I also voted for [Democratic U.S. Rep.] Chet Edwards, and I don't want redistricting to split this district.'" The congressional map passed by the House would split Edwards' Dist. 11 and McClennan Co., moving the district's population center from Waco to the Austin suburbs of Williamson Co.

Like Rose, Mabry was targeted by the Republican Party in the immediate aftermath of Ardmore but says that attack produced only a brief spike of opposition from voters in his district that turned around very quickly. "Once people realize what is going on," he said, "they overwhelmingly oppose redistricting."

Asked if he thought the attacks on rural white Dems suggest a larger GOP strategy, Mabry answered, "I hope it is not a conscious decision to eliminate white faces from the Democratic Party, but that certainly appears to be the case."

Texas is now, or in a few years will be, a "majority-minority" state -- that is, a majority of Texans will be of either Mexican-American or African-American descent. The Legislature's majority party is not quite so multicultural. Among 20 Senate Republicans, there are no Hispanics or African-Americans, and of the 88 Republicans in the House, two are members of minority groups: Elvira Reyna of Mesquite and Martha Wong of Houston.