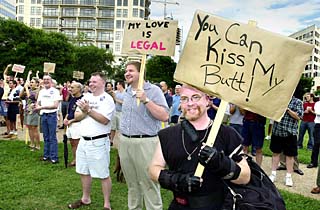 The Lesbian/Gay Rights Lobby of Texas started the week preparing for the next big fight -- same-sex marriage -- but last Thursday, fighting was the last thing on the minds of hundreds of gays and lesbians gathered at Republic Square Park.

"The Religious Right is pissed off!" shouted a gleeful Randall Ellis, LGRL executive director. "Na-na-na-na!" The crowd whooped and hollered in celebration of the Supreme Court's landmark ruling invalidating §21.06 of the Texas Penal Code, the state's infamous sodomy law applying exclusively to "homosexual conduct." (While the Penal Code never uses the word "sodomy," it described the acts generally known by that term as "deviate sexual intercourse" only when performed by members of the same sex.)

The threat of rain an hour earlier gave way to sunshine and chirping birds, as speaker after speaker lauded the monumental decision in gay history. "Do you realize what it's going to be like not to have to state our case in the vocabulary of the homophobe?" mused the Rev. Jim Rigby, noting this may have been the last time the word "sodomy" will be uttered at a gay-rights rally. "Those who've been saying that the [ills of the world] come from people using the wrong orifice are looking pretty stupid today."

Former state Rep. Glen Maxey reminded the crowd of the 30-year struggle for gay rights in Texas, starting with the first torchbearer, Bettie Naylor, who began lobbying for LGRL back when openly gay lobbyists -- much less female lobbyists -- were rare sights at the Capitol. State Reps. Elliott Naishtat and Eddie Rodriguez, both Austin Democrats, also spoke in praise of the high court's ruling.