The Gavel Comes Down on Redistricting A-Go-Go

The Lege returns, and the gentlemen start their engines. 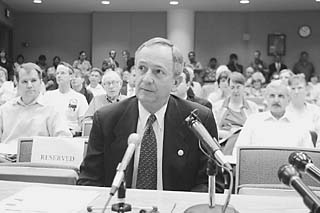 The special session of the 78th Legislature on congressional re-redistricting opened under storm clouds Monday morning -- and went downhill from there. A few moments after Speaker Tom Craddick had gaveled the House to order, Speaker Pro Tem Sylvester Turner offered a resolution formally announcing the return of the House -- and several of his Democratic colleagues immediately lined up at the back mic to challenge the motion. The debate began apparently as a procedural maneuver -- Democrats opposed to redistricting suggested that blocking a vote on Turner's symbolic resolution might provide a parliamentary obstacle to even beginning the session. But matters turned personal when Houston Dem Rick Noriega suggested that Turner might be in a hurry to get back to Houston, where he's running for mayor.

Turner has tried to stay out of the redistricting crossfire -- he has remained deferential to Craddick's leadership, and in May when the Dems broke the quorum and fled to Oklahoma, he was not among them -- but he was angered by Noriega's suggestion that in making what amounted to a ceremonial resolution he was somehow carrying water for the GOP. He angrily replied that he would not be party to anyone's "hidden agenda." "I don't want to be here," he thundered. "I was opposed to redistricting, I remain opposed to redistricting, and I will vote no on redistricting." With that, he "respectfully" withdrew his resolution, Craddick ruled that it was only a formality in any case, and the tone was set for the day.

Earlier, in a press conference on the south steps, most of the House Dems had vowed to continue the fight on the floor. Yet they acknowledged that the Ardmore exodus was a one-time option, that the Republicans have the House votes to do whatever they wish, and that the key battleground has shifted to the Senate. The buzz from the Senate, where the Republicans need only two Democratic votes to bring a redistricting bill to the floor, is mixed. Sen. Eddie Lucio, D-Brownsville, has shifted from a "soft no" to something harder -- convalescing from a recent heart attack, he announced last week he would run for re-election and that he would not support redistricting unless five districts are anchored on the border and the map is supported by both the League of Latin American Citizens and the Mexican-American Legal Defense and Education Fund. Both organizations have already declared their opposition. On the other hand, both San Antonio's Frank Madla and Victoria's Ken Armbrister have said that if the map that eventually appears suits their own swing districts, they may be willing to support it. They've become the dominoes to watch. Democratic reps in fact believe the map currently under House consideration amounts to a moderate stalking horse, designed to pass the Senate, even under its two-thirds rule, and then move to a conference committee, where a simple GOP majority can determine the real districts.

While the House Redistricting Committee was holding its carnivalesque subcommittee hearings around the state (see "Capitol Chronicle"), the Senate Jurisprudence Committee first held two unremarkable hearings in Laredo and San Angelo, where most of those who testified, acknowledged committee Chair Robert Duncan, R-Lubbock, were opposed to redistricting. Tuesday in McAllen was another matter: Protesters loudly refused to let testimony proceed until the committee agreed to hold a hearing Monday, July 7, in Corpus Christi. For the record, the field hearings that preceded the last redistricting, in 2001, included both houses in joint sessions, visited every region of the state, and lasted from February through September 2000.

The House outcome appears to be a foregone GOP conclusion -- but the process is something else again. After much delay, Rep. Phil King, R-Weatherford, introduced the latest GOP map Tuesday night with the expectation of a July 7 House vote -- and it survived less than 24 hours, as King abruptly withdrew it Wednesday afternoon in response, he said, to potential Voting Rights Act violations. 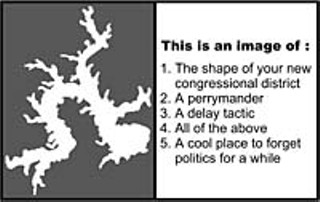 On Tuesday night, an already restless crowd, angry at the postponement of the scheduled 2pm meeting to 7pm, was demanding loudly, "Where's the map?" When the map finally appeared, Democrats Richard Raymond and Ruth Jones McClendon described it as "a fake." "They say the map creates 19 Republican opportunity districts," said McClendon. "They already have 20 -- so they want to lose one? That's why we're here?"

King's latest (and now withdrawn) map, to the surprise of many in the audience, leaves Travis Co. basically untouched and preserves a safe district for incumbent U.S. Rep. Lloyd Doggett. It also meets the expressed needs of Central Texas Republicans -- keeping Williamson and Hays counties intact (though in two different districts) and creating a new open district for Temple/Killeen. The new map, moderate and "fake" though it may be, does substantial damage elsewhere in the state, particularly to minority communities in Harris Co. and the Metroplex, and includes some bizarre quirks -- such as splitting Waco in half and separating Bryan from College Station. (But Permian Basin elephants, including Speaker Craddick, should be happy that Midland would no longer be in the same district as Lubbock.)

The Tuesday night hearing occasioned several angry exchanges among committee members and other lawmakers who came to testify. King defended his revised map as a "reasonable" attempt to send more Republicans to Washington "to help President Bush in his endeavors," while both from the dais and on the floor, Democratic reps called it an unnecessary, wasteful, and effectively racist disenfranchisement of minority voters. Citizen testimony -- overwhelmingly against redistricting and the process designed to impose it -- began only at 10:45pm, continued until 4:15am, and resumed Wednesday afternoon.

Monday's meeting had featured only brief and vague verbal "reports" about the field hearings from the subcommittee chairs, who acknowledged overwhelming sentiment against redistricting but grumbled about apparent Democratic Party organization of protests. "The atmosphere was very intimidating," said Rep. Mike Krusee, R-Taylor, of the Brownsville meeting. "Some people had identical hand puppets!" complained Rep. Carl Isett, R-Lubbock, of the crowd in Dallas. Despite his colleagues' grumbling, committee Chair Joe Crabb, R-Atascosita, acknowledged that both parties had tried to bring out their supporters, all of whom were citizens who needed to be heard. Crabb refused, however, repeated requests from Laredo Democrat Richard Raymond to acknowledge that no "official" field hearing had taken place on the border, saying only, "A meeting was held without a quorum. ... The courts will decide whether it's official or not."

Two motions by Democrats, first to suspend redistricting altogether, then to delay discussion pending arrival of the transcripts of the field hearings, failed along party lines. "Let the record show," insisted Raymond, "that no minority representatives" voted against the motions. A third motion to hold hearings in Waco and Laredo -- Democrats said that had already been agreed to by the Dallas subcommittee -- also failed. Implicit charges of racism were thick in the air, and Raymond and Pasadena Republican Robert Talton engaged in several increasingly personal shouting matches -- once forcing Crabb to call a brief recess, to little effect.

In response to accusations of meddling by Democratic members of Congress in the hearing process, Raymond had challenged Talton to deny that Tom DeLay had called Republican members to the basement of the Capitol to get their instructions. "No, I wasn't asked!" shouted Talton.

Crabb gaveled Talton down, but not before his GOP colleague let the cat out of the bag. "Not in the basement of the Capitol!" Talton concluded, leaving the room to wonder only where else the U.S. House majority leader had hosted his private visitations.

The committee had expected to vote on King's revised map just about the time it received the transcripts of the field hearings. At press time Wednesday, testimony proceeded -- on a mystery map.