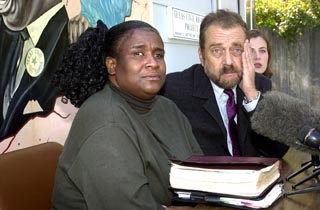 Gavino Fernandez Jr., leader of the El Concilio coalition of Mexican-American neighborhood associations, is scheduled to appear in District Judge Brenda Kennedy's courtroom tomorrow (Friday) for a hearing related to his May 22 arrest. Fernandez is charged with possession of a controlled substance (a state-jail felony) and aggravated assault (a second-degree felony); he has spent the time since his arrest in Travis Co. Jail, unable to make bail due to a previous contempt-of-court charge. He also faces a federal investigation into charges of immigrant smuggling. -- Lauri Apple

Austin's budget blues may brighten a tiny bit thanks to Gov. Rick Perry, who announced this week a grant of nearly $1.8 million in homeland-security funding to our fair city. That's the fourth-largest grant awarded (after Harris Co. and the cities of San Antonio and Amarillo) in the governor's allocation of $84.1 million in federal anti-terror funds. Travis Co. received a $600,000 grant; Williamson Co. and its four major cities received a total of more than $900,000. In general, suburban and rural communities with powerful Republican legislators (like Amarillo) did notably well on the governor's list. Another example: More funds flowed to Denton Co. and its cities than to Nueces Co. and its cities, despite Corpus Christi's being a major industrial center and port of entry into Texas. -- M.C.M.

The Wal-Mart Supercenter planned at the corner of MoPac and Slaughter -- you know, the Supercontroversial, Superimpervious-cover Wal-Mart that would reside in the Barton Springs Recharge Zone -- is still on the table, and southwest Austin neighborhood associations have steadily gone about organizing against it. On Wednesday, July 2, from 7 to 9pm, residents of Sendera Estates, New Villages at Western Oaks, Circle C Ranch, and Deer Park (and perhaps others) will join the Save Our Springs Alliance and the Save Barton Creek Association in sponsoring a community meeting on the Wal-Mart at the Lady Bird Johnson Wildflower Center, 4801 La Crosse Ave. Endeavor Real Estate Group reps will also be on hand to present their plans for the 43-acre Wal-Mart tract and surrounding pad sites. Be there, or be Wal-Mart-shaped. -- L.A.

Schlotzsky's founder and CEO John Woolley dodged a bullet -- or perhaps a muffaletta -- at the sandwich chain's annual meeting this week. Dallas investor Joseph Beard, Schlotzsky's largest shareholder, had called for a vote on selling the Austin-based company, which has taken a pounding on Wall Street -- its stock, which trades on the Nasdaq under the ticker symbol BUNZ, was once $25 a share but is now less than $3. Two-thirds of shareholders voted against a sale; investors also elected as new directors Austin attorneys Pike Powers and Sarah Weddington and former state Comptroller John Sharp -- all nominated by Woolley and the current board. Powers' nomination had been opposed by one powerful investment advisor because the former Chamber of Commerce leader's firm, Fulbright and Jaworski, had done work for Schlotzsky's. -- M.C.M.

Monday's public meeting on the route and design features of the Lance Armstrong Bikeway went off without either major news from the city or fireworks from the cyclists and Eastside neighbors in attendance. David Magaña of the city's Public Works department briefed attendees at Metz Elementary in East Austin on the $4.2 million, 6-mile, east-west route, which the city plans to begin building in December 2004 and finish a year later. Some audience members expressed safety concerns about the bikeway route -- for example, the wisdom of its western terminus being at Lake Austin Boulevard and Veterans Drive (across from the Magnolia Cafe), a point already overrun by pedestrians, cars, strollers, joggers, and dog walkers. Yet city staff remain committed to the current plan, now in its fourth year of evolution. -- L.A.

The Texas Civil Rights Project has filed suit against Austin police Officer Michael Owens alleging police brutality. In June 2002 Owens was involved in an altercation on Sixth Street with Jeff Thornton, captured on city surveillance cameras, in which Owens slammed Thornton against his car and to the ground hard enough to cause Thornton to lose consciousness, the lawsuit charges. Owens was suspended from APD for 60 days after the incident; charges against Thornton of resisting arrest were dropped, TCRP says, once the department saw the video of the incident. The lawsuit seeks $100,000 in damages; APD and the city are not named as defendants. -- M.C.M.

Also from TCRP: After a press statement Monday by APD Chief Stan Knee "announcing" an FBI investigation into last summer's police shooting of Sophia King -- a probe that Naked City first reported back in February -- TCRP Director Jim Harrington fired off his own statement of outrage that the FBI had never contacted TCRP, which is representing King's family in a lawsuit against the city over the June 2002 slaying. "We probably have greater familiarity with the facts of the case than anyone else," noted Harrington. "It's clear that the FBI is not after the truth, but only a way to exonerate the police." In his statement, Knee said the department believes the FBI will conclude, as did APD Internal Affairs and a Travis Co. grand jury, that Officer John Coffey's shooting of King was "necessary to save the life of another individual" -- a Housing Authority staffer whom King was allegedly attacking with a knife. In addition to the FBI, Dallas lawyer Robert DeWolf is working with the city's Office of the Police Monitor on an independent probe of the King shooting. -- M.C.M. Former U.S. Dept. of Housing and Urban Development Director Henry Cisneros came to town Tuesday to inaugurate two new affordable-housing developments in Southeast Austin: Los Arboles and Los Jardines. The developments, which will provide 460 homes between them, were built by the partnership of American CityVista, of which Cisneros is chairman and CEO, and KB Home. Los Arboles offers a contemporary feel, while Los Jardines' spacious, brightly colored units are more traditional; homes in both developments are priced well below $160,000, the city's median housing price. Both developments are being marketed to Austin's growing Hispanic population, particularly young professionals and families. -- L.A.

Finally -- Austin has moved down on a high-profile "Best Cities" list. The Austin metro area dropped 40 spots, from No. 19 to No. 59, on the Milken Institute's list of "best performing cities." The list, which claims to measure job creation and economic growth, has in years past been dominated by tech towns, but Austin's not the only Silicon Somewhere to take a big dive this year -- San Jose, which two years ago was No. 1, is now at 147. Austin would likely have dropped farther, the Institute suggests, but for the "stable" employment base of government and higher education (we'll see how long that lasts as the pink slips start flying through the Capitol Complex). Traditional economic engines drive the top performers on this year's list -- the No. 1 metro area is Fayetteville, Ark., home to Wal-Mart, and the highest-ranking big city on the list is Washington, D.C. Interestingly, the best-performing Texas towns are all ones we typically think of as disadvantaged -- Laredo, Brownsville, and McAllen are all in the Top 10, with San Antonio joining them in the Top 20. -- M.C.M.

On the other hand, Austin -- along with San Antonio, Houston, Harlingen, and a dozen other Texas cities -- is a contender to be the site of the Boeing Co.'s new $900 million manufacturing plant, production center for the aircraft giant's new 7E7 Dreamliner. The plant, which is being sought by more than 40 cities nationwide, would create as many as 1,200 direct jobs and obviously change Austin's economic outlook; the state is expected to offer a large chunk of the $295 million Texas Enterprise Fund in cash sweeteners to Boeing, in addition to whatever (probably record-breaking) incentive package the city could produce. Monday was the deadline for states to submit proposals to Boeing, which is currently short-listing the contenders. -- M.C.M.

The city Historic Landmark Commission on Monday initiated a historic-zoning case for property on West 26th now used by the Delta Chi fraternity. (It's only "Dean Keeton" east of Guadalupe). The property had been slated for demolition by developer John Lairsen, who proposes apartments for the site. Opposing the demolition, and favoring historic zoning for the site, were two stakeholders more accustomed to fighting with each other -- the North University Neighborhood Association and developer/investor Mike McHone of the University Area Partners and the still-controversial Villas on Guadalupe. -- M.C.M.

Customers of Wheatsville Co-op can now cook up their salmon croquettes relatively guilt-free, thanks to a decision by the grocer to stop selling farm-raised salmon in favor of wild salmon obtained directly from fishers. Wheatsville's decision is partly a response to advocacy by PODER, the Indigenous Women's Network, and other groups concerned about the environmental and health impacts caused by harvesting salmon raised near indigenous communities in British Colombia, Chile, and elsewhere. According to the pro-sustainability Institute for Agriculture and Trade Policy, farm-raised salmon often contain color additives such as canthaxanthin, which may cause eyesight problems. -- L.A.