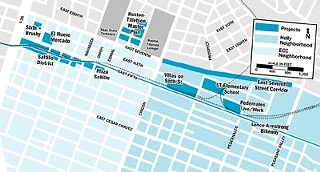 Capital Metro's redevelopment plans for the Saltillo District would create a gateway and centerpiece for what has already, and rapidly, become a hot stretch of Austin real estate. After decades of neglect of the industrial rail yard, both private and public money is flowing into the corridor -- transforming, and at times worrying, the Eastside neighborhoods.

Cap Metro hopes its 11-acre parcel can become a showpiece of transit-oriented development and a hub for rail -- while still being affordable (even by Eastside standards) and consistent with the character of the barrio.

After years in development, the one-block public plaza has been underutilized ever since it opened; the city, Cap Metro (which actually owns the land), and local businesses and neighbors want the plaza to be a real "town square" for the Saltillo corridor.

The ECC plan, adopted by the city in 1999, calls for mixed-use new-urban development along the rail corridor. The ECC planning team included Lori Renteria and her allies, but not members of El Concilio, who loudly tried to shoot the plan down, saying it would gentrify the neighborhood. While the ECC team at one point objected to Cap Metro's plans for the Saltillo District, the transit authority says the ECC plan will be the Saltillo starting point.

The Holly plan was driven by El Concilio -- and, despite that group's criticisms of the "gentrifying" elements of the ECC plan, it calls for much of the same sort of post-industrial development on the corridor. The Holly planning team has endorsed projects like the Pedernales and the Villas on Sixth.

The college intends to develop new student housing and athletic facilities on the blocks it owns just north of Seventh Street, between the current campus and the State Cemetery.

UT's charter school, serving first-graders (to start) in the corridor and surrounding neighborhoods, is already well under construction.

The 6-mile crosstown bike route crosses the Saltillo site and runs through the corridor; unlike the west-side section, the Eastside bikeway will likely consist mostly of signs and stripes on existing streets.

The city's corridor streetscape project aims to make Seventh both a more useful and beautiful neighborhood arterial and a better gateway to Downtown from the airport. Phase I covers the stretch between Chicon and Pleasant Valley.

The glossy mixed-use project has gotten a go-ahead from the city, but developers say the bust and Eastside redlining have gotten in the way of financing.

The 160-unit low-income project, a partnership with the YMCA, is hoping to persuade the state to award it tax credits that will help Campbell-Hogue to offer below-market rents.

The owner/developers of the adjacent 501 Studios and J.R. Reed media complex are putting up a 23-unit market-rate building with ground-floor retail.

"The overriding goal for the Saltillo District Redevelopment Project is to construct an exemplary, compact community,"- Capital Metro literature