A Quarter Ounce a Day

Texas man lives by -- and fights for -- medical marijuana 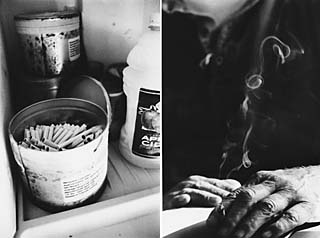 George McMahon of Tyler is one of seven people in the United States currently granted federal permission to use marijuana for medicinal purposes, under the "Compassionate Investigational New Drug" (IND) program of the Federal Drug Administration.

At age 52, McMahon has outlived the typical life span of most people diagnosed with the disease from which he suffers -- Nail Patella Syndrome. NPS is a hereditary neurological disorder that attacks internal organs and the immune system and is usually characterized by some deformity of fingernails -- hence the common name. Eight percent of those with NPS are severely affected, and of those, most never live past age 40. McMahon is an exception. His father died at age 40, his sister at age 44. Both had NPS. His mother also carries the disease but is only mildly affected, with arthriticlike pain.

In 1978, the National Institute on Drug Abuse began supplying marijuana to patients accepted to the IND program upon application by their physicians. Acceptance of new patients was halted in 1992, but NIDA continued to supply marijuana to those already receiving it. As of 2002, McMahon was one of seven people remaining in the program and participated in the Missoula Chronic Clinical Cannabis Use Study that concluded that cannabis can be a "safe and effective medicine" against certain chronic conditions. McMahon gets treatment for severe muscle spasms and nausea caused by his condition, and smoking marijuana has succeeded in alleviating his symptoms much more effectively than chemical medications.

In recent years, due to the slow abandonment of medical-marijuana research and the increasing politicization of the drug laws, the number of federally permitted users has dwindled nearly to zero. Many research programs were discontinued during the Eighties "Just Say No" campaign led by first lady Nancy Reagan, and under the Clinton administration the incarceration of marijuana users and small-time drug users greatly accelerated. 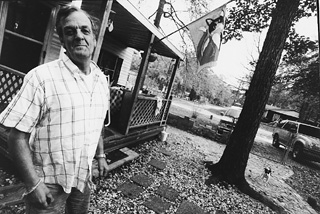 Yet throughout the same period, public sentiment and even state and local laws have grown increasingly tolerant of marijuana use, especially for medical purposes. In 1988, Drug Enforcement Agency administrative law judge Francis Young concluded that "marijuana is one of the safest therapeutically active substances known to man." Since 1996, 10 states (Alaska, Arizona, California, Colorado, Hawaii, Maine, Nevada, Oregon, Washington, and most recently Maryland) have legalized state medical-marijuana programs -- with a consequent backlash from the federal government. According to the National Organization for the Reform of Marijuana Laws, since the Bush administration took office federal drug enforcement officials have acted against more than 35 medicinal-marijuana patients, cooperatives, and providers in California alone.

In early June, medical-marijuana advocates won a significant symbolic victory when Ed Rosenthal (aka California's "Guru of Ganja") was sentenced to only a single day in jail, following his February federal conviction on three felony counts related to his cultivation and possession of more than 100 marijuana plants. Rosenthal could have been imprisoned for 60 years -- prosecutors had requested 61é2. Rosenthal said he was growing the plants to supply Oakland cooperatives with medicinal marijuana for state-qualified patients. At trial, Judge Charles Breyer refused to admit that evidence -- saying it was irrelevant to Rosenthal's guilt or innocence under federal law -- but said it did bear on his motives in considering a sentence. Prior to the sentencing, several jurors said publicly that had they been allowed to know the actual circumstances of Rosenthal's crime, they would have acquitted him.

The Mercury News in San Jose reported that outside the courthouse following the sentencing, Rosenthal shouted to jubilant supporters, "This is day one in the crusade to bring down the marijuana laws -- all the marijuana laws!"

Since 1991, George McMahon has smoked 10 marijuana cigarettes every day (a quarter ounce in all) to relieve pain and nausea, and to help him sleep. Accordingly, the U.S. government provides McMahon with seven and a half ounces per month. (These are rough estimates, since the marijuana supplied by the government is of poor quality, and McMahon estimates that in cleaning it, he loses about 25%.) Since he first gained access to the Investigational New Drug program in Iowa, he must make the long drive from Tyler to Iowa every three or four months for a new supply of pot, which is actually grown at the University of Mississippi under the supervision of the National Institute on Drug Abuse. The cost to the government of growing the marijuana is negligible, so McMahon is not charged for his share.

Before he began smoking marijuana, McMahon was taking nearly 20 different medications -- a total of 51 pills daily. The cost, as well as the numerous side effects, was too much for him to bear. "All those pills damaged my stomach and made it nearly impossible to eat, as I was continually nauseated. Now I only take one medication. It's all I need." 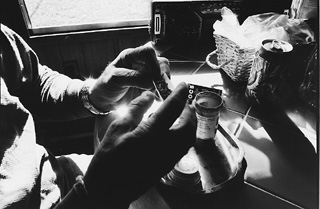 Photo By Andrew Slaton
As he lights one of his joints, McMahon explains how the marijuana works for him. Each morning, most of the pain he suffers subsides after he smokes his first joint upon awaking. Throughout the day, he smokes when he feels the need to relieve his recurring pains caused by his weak, brittle bones. Smoking before meals, he says, restores his fragile appetite.

In 1997, the doctor monitoring McMahon's condition wrote, "I do feel that [McMahon] continues to benefit from marijuana and hope that we can continue providing [him] with marijuana medication." Asked recently about his overall state of health, McMahon replied, "I am alive, with some quality of life. I do not ask what my doctor thinks. I am not interested in any treatment or drug. So my health is what it is, today -- how long I will live, no one knows. As long as I smoke MJ I am fairly comfortable."

For more than 10 years, McMahon has followed his routine with the aid of his wife, Margaret. "Margaret is my other half," he says. "Without her, I wouldn't have made it this long. She takes care of me when I cannot take care of myself." In the years since McMahon began using medicinal marijuana, George and Margaret have traveled the country to discuss the issue with college students, professors, and medical associations, and he has also testified at congressional hearings. Recently, he testified in a lawsuit that reached the 9th Circuit Court of Appeals -- the court ruled that in moving to revoke a physician's license for recommending medical marijuana, the federal government had violated the First Amendment.

In the early Nineties, in honor of his personal campaign promoting the availability of medical marijuana for all patients who need it, McMahon was awarded a certificate of heroism from the president's Drug Awareness Program. The certificate was signed by Nancy Reagan.

According to Keith Stroup, executive director of NORML, pending congressional legislation (HR 2086) would allow the Office of National Drug Control Policy to use as much as $60.5 million (from current anti-drug-trafficking programs) in order to target and prosecute medicinal-marijuana patients and their providers in states where the practice is legal, and would also allow the ONDCP to fund ads attacking new medical-marijuana initiatives. "The Bush administration, especially Attorney General John Ashcroft and drug czar John Walters, are extreme anti-marijuana zealots who are out of touch with the American public -- 80% of whom approve of the medical use of marijuana," said Stroup. "It is unconscionable to continue to deny an effective medication to those seriously ill patients who need it and have a legal right to use it under state law."

George McMahon says he understands that his own long physical and emotional struggle has only been bearable because of the strong and unqualified support of those who love him. "I have the full support of my family. Without their support, I would not be able to continue this battle I have undertaken to see every 'patient out of time' allowed to use the substance that helps them most to cope with the pains and illnesses of their lives -- marijuana."

For more information about medical marijuana and related matters, see the NORML Web site at www.norml.org, or www.medicalmarijuanaprocon.org.