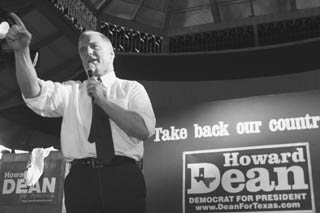 A pachanga broke out in East Austin Monday night, as more than 3,000 people turned out at Plaza Saltillo for a rousing Howard Dean for President rally, hosted by the suddenly burgeoning Dean for Texas campaign. Even the Texas campaign coordinator, former state Rep. Glen Maxey, confessed surprise at the large turnout more than a year ahead of the election. "I haven't made a single phone call for this campaign," Maxey said. "It's the first campaign I've ever worked on that this has happened, and that's not just because of e-mail. This is a grassroots campaign, and we've gotten 4,000 volunteers already in Texas just by people passing the word." Maxey said he had promised the Dean campaign $10,000 from the rally. Two hours later, as the crowd was breaking up, donations were pushing $20,000 -- in addition to some heftier checks contributed earlier on the west side.

Under the theme "Take Back Our Country," speaker after speaker excoriated the Bush administration and described Dean, the former governor of Vermont, as the Democrat most likely to energize the party, bring together a broad coalition of voters -- and stand up to George W. Bush on the issues.

"Although City Council elections are nonpartisan," said Mayor Pro Tem Jackie Goodman, "it's no secret I'm a Democrat. And I'm looking for a Democrat with guts, one who will stand up and fight for what he believes in -- like the Killer D's." Any mention of the House Democrats who last month broke the quorum to block congressional redistricting received thunderous applause -- and other than the headliner himself, the loudest ovation went to state Rep. Eddie Rodriguez, whom retired Dist. 51 Rep. Maxey introduced as "the greatest state representative in the history of District 51!" (Rodriguez succeeded Maxey after serving as his chief of staff.) Rodriguez said he was proud to be introducing and endorsing Dean "in the heart of my district," saying Dean was standing up for the central values of the community: "diversity, family, and grassroots democracy."

Dean is an impressive stump speaker, and he hammered the issues he considers central to his campaign: a balanced federal budget accomplished with health insurance for every American, increased support for education, investment in infrastructure, and the creation of new jobs. "We've accomplished all that in Vermont," declared Dean. "Take that, Governor Perry!" Dean didn't shy from the hot-button social issues that his more moderate Democratic opponents ("Bush Lite," he calls them) say threaten to push the party out of "the mainstream." "Bush uses the term 'quotas' to describe affirmative action at the University of Michigan," he said. "The University of Michigan doesn't have a quota system, and that's a race-loaded term intended to frighten Americans afraid of losing their jobs. I'm tired of the country being divided by this president." Dean added that he's also proud of his signature on Vermont's "civil unions" bill for gays and lesbians. "All of us are equal," he said, "or none of us is equal."

Afterward, Maxey acknowledged that progressive Democrats have been burned plenty of times by national candidates, but said Dean has a clearly progressive record in Vermont and is the only Democrat "with a cogent message and the charisma to get it across to voters." Maxey says he believes strongly that Dean can win the Democratic nomination "from the grassroots up," and will assemble the broad coalition necessary to defeat George Bush next year.