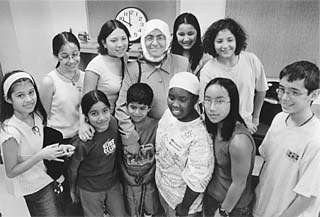 In January 1999, Iraqi elementary schoolteacher Akbal Thyab heard a U.S. cruise missile slam into the ground nearby her home in Basra and ran outside to check on her two young sons, Haider and Mostafa. They were covered in blood. Unable to carry both children, she picked up Mostafa and ran him to the hospital. Mostafa lost two fingers and was riddled with shrapnel, much of which remains in his body; Haider died. In honor of Haider, Thyab changed her name to Um Haider (Mother of Haider). Last week Um Haider and Mostafa visited Austin en route to Los Angeles to obtain medical treatment, meeting with students at Valley View Elementary and Fulmore Middle School, sharing stories with the anti-war Women in Black, and relaxing at Barton Springs, which became Mostafa's favorite place. -- Lauri Apple

Louisville, Ky., officials this week announced the new head of the Derby City's parks department -- Mike Heitz, currently director of Austin's Watershed Protection and Development Review Dept. Heitz, a Louisville native, ran Austin's parks system (from 1992 to 1996) during an 18-year career with the city. "Michael is a hometown guy who has proven he can solve big-city challenges," Louisville Mayor Jerry Abramson told reporters. Heitz's first day on his new job is Aug. 4. -- M.C.M. The Endeavor Real Estate Group -- developers of both "the Wal-Mart on the Aquifer" and "the Domain: Showpiece of Smart Growth" -- has inspired much letter-writing among the citizenry as of late. A letter to the City Council co-written by Melissa Gonzales of the Morning Star Trading Co., Sweetish Hill Bakery owner Patricia Bauer-Slate, and BookPeople owner Steve Bercu subtly requested the council to reconsider awarding incentives to projects in the distant regions of the city's Desired Development Zone. The Domain, which will receive a projected $37 million in tax rebates, is located in North Austin near Braker and MoPac, far away from retail-hungry Downtown. "A suburban project with disproportionate city incentives will likely draw tenants away from the central area or even pull existing businesses attracted by cheaper rent and more accessible parking," the trio asserted. Meanwhile, neighbors of Endeavor's proposed Wal-Mart Supercenter at MoPac and Slaughter are writing Wal-Mart executives in Arkansas requesting that the Beast from Bentonville move to a location raising fewer traffic, environmental, and quality-of-life concerns. -- L.A. The first annual report from Police Monitor Iris Jones is now available online at www.ci.austin.tx.us/opm/report.htm. In its first year the Office of the Police Monitor reports receiving 273 separate reports with a total of 465 allegations against Austin Police Dept. officers. (APD had more than 1 million "citizen contacts.") The majority of the allegations concern officers' "responsibility to the community," which includes charges of rudeness and unprofessional conduct. According to OPM statistics, 56.4% of complainants were male; 37% were white, 33% black, and 24.5% Hispanic. Jones also reports that during the year ending Feb. 11, her office made 10 policy recommendations to APD Chief Stan Knee -- from supplying officers with Braille business cards to improving reporting under the state's racial-profiling law. Four have been accepted by the department, one was sent to the APD Policy Review Committee, one is pending "further research," and four are outstanding. -- Jordan Smith Austin's Family Eldercare summer fan drive kicks off this week. This year the organization is aiming to distribute more than 3,500 fans to help low-income elderly and disabled Austinites stay cool this summer. New fans can be dropped off at the Family Eldercare offices at 2210 Hancock Dr. from 8:30am to 5pm. Online tax-deductible donations can be made at www.familyeldercare.org. Folks in need of a fan should call the fan drive hotline at 459-4FAN. -- J.S. Austin lawyer Ray Martinez, a former Clinton White House aide and head of the Every Texan Foundation -- the voter-registration effort launched by Henry Cisneros -- has been nominated by Senate Minority Leader Tom Daschle, D-S.D., to serve on the new federal Election Assistance Commission, which will monitor election reforms spawned in the wake of the 2000 debacle. Martinez -- along with nominees from Daschle's GOP counterpart Bill Frist, R-Tenn., and their respective House counterparts Nancy Pelosi and Dennis Hastert -- still must be officially appointed by President Bush and confirmed by the U.S. Senate. -- M.C.M. Lawyers for both the city and Austin Police Dept. Officer Jeff White were in court on April 17 when District Judge John Dietz ruled that discovery in White's whistle-blower lawsuit can go forward. And they were both there when he suggested they retire to the court's jury room to schedule depositions for city outside counsel Lowell Denton, APD Chief Stan Knee, Assistant Chief Jimmy Chapman, and City Manager Toby Futrell. Two weeks later, city outside counsel Pat Bernal and White's lawyer Donald Feare reportedly met as scheduled for Denton's deposition. So, why haven't the Big Three -- Knee, Chapman, and Futrell -- been deposed, despite being scheduled for questioning on May 24? Naked City has been told that shortly before the big day, Bernal told Feare that the weekend date had simply been a "typo." As of press time, no new date had been set, and the Big Three have apparently escaped -- for the time being -- having to describe what they knew about the infamous mid-Nineties Mala Sangre (Bad Blood) police-corruption case -- and, perhaps more importantly, when they knew it. It seems unlikely the three will be able to avoid the inquisitors indefinitely. Naked City predicts Dietz will turn into a fiery ogre if Feare is forced to bring this to him one more time. -- J.S.