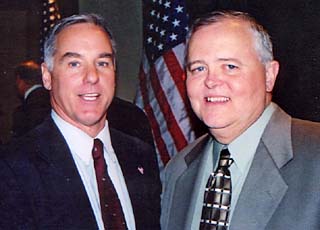 Former state Rep. Glen Maxey (r) is Texas coordinator for the presidential campaign of former Vermont governor Dr. Howard Dean (l). The candidate will be in Austin Monday, June 9, for the first local rally by any of the announced Democratic contenders. The rally begins at Plaza Saltillo at 8pm; Dean will speak around 9:15pm.

Quote of the Week: "It is exactly the Stenholms of the world who will disappear ... the moderate Democrats. They will go so that no Texan need grow up thinking that being a Democrat is acceptable behavior." -- Leading Republican gasbag and anti-tax crank Grover Norquist, responding to comments from a bitter U.S. Rep. Charlie Stenholm, D-Abilene, about the congressional redistricting crusade. See Beyond City Limits for more redistricting news.

The 78th Legislature is sine-dead -- at least until October, the current favored date for a near-inevitable special session to wrangle with school finance. See Adiós! for the lowlights.

A total of 15,502 Austin voters -- 3.9% -- voiced their choice for either Brewster McCracken or Margot Clarke in early voting for the Place 5 City Council run-off. Election Day is Saturday. Time Warner digital-cable subscribers who remain undecided can replay McCracken and Clarke's News 8 Austin debate at will -- it's video-on-demand Channel 1301. See It's All Over But the Votin' for more on the Place 5 race.