Are McCracken and Clarke as far apart as Austin voters want them to be?

Brewster McCracken has been dealing with this now for two years and two elections -- "Really! I'm not a Republican!" you can almost hear him imploring voters (and journalists). "I play disc golf! I have an unpublished novel! I care about the environment! I care about the disadvantaged!" I've added the exclamation points for effect, but I know Brewster pretty well by this point, and I can vouch for the Place 5 candidate on this score. He really isn't a Republican. Five years ago, he would have been widely understood to be a Green Machine progressive -- even more so than Kirk Watson or Will Wynn, certainly as much so as Bill Spelman, perhaps even as much as his 2002 opponent Beverly Griffith. I guess things are different now.

Meanwhile, his current opponent, Margot Clarke, is marching toward June 7 through her own barrage of weird perceptions. You, like me, may have gotten in the mail a personal letter from your friend Mike Levy -- the Texas Monthly publisher has lots of friends -- urging you (with great emphasis) to vote against Clarke. Not for Brewster. Against Margot. (Apparently, she reminds him too much of Beverly Griffith.) And the Statesman editorial board, in endorsing McCracken, was able to divine -- how, I know not -- that Brewster was qualified to steer the city through the red-ink swells, and Margot was not. (I guess she reminds them too much of Beverly Griffith.) This despite the fact that, to my knowledge, Clarke has substantially more hands-on experience in business (high tech, no less) and as a manager than W. Brewster McCracken, Esq. I thought the Statesman cared more than I did about such things.

Did We Miss the Memo?

Actually, the daily's most prominent reason for backin' McCracken was that he'd be the better member of Will Wynn's team. We think so too, which is why we endorsed Clarke; we fear Brewster would be too good a member of Wynn's team, as in joined at the hip. As I said, I like McCracken (and Wynn) just fine, but I want the City Council to have seven members, not 61é2. 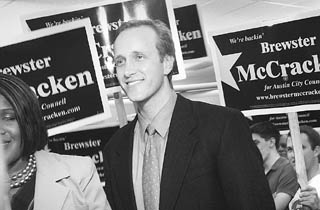 But I certainly haven't seen evidence (and I think my colleagues here would agree) that Brewster and Margot are on opposite sides of a great divide, within which lies the soul of the city. We're not talking Brigid Shea vs. Bob Larson here -- but you'd never know that from hearing the chatter around the Place 5 race.

Yes, of course, politics are involved here. Clarke has every good reason to maximize the differences between her and McCracken; he has every good reason to minimize them. Margot needs to mobilize her supporters in the central city to return for the run-off, which will be a lot easier if they're genuinely afraid of Brewster or feel they disagree with him on core issues. McCracken, conversely, benefits from demotivating those same central-city voters by having them believe there's little real difference between him and Clarke. If so, then Brewster's rabidly loyal neighbors in the Northwest will provide the margin of run-off victory.

Obviously, if we thought Brewster and Margot were interchangeable, we wouldn't have made an endorsement. But what strikes me is the vigor with which people outside the campaigns, people who I'm not sure will even vote in the run-off, have decided that Brewster or Margot is on their side. I'm not surprised that in the first round McCracken did better west of MoPac and Clarke in the city center. But I am surprised at the breadth of the disparity -- Margot beating Brewster 3-to-1 in Hyde Park and Zilker, Brewster beating Margot 10-to-1 out on Spicewood Springs Road. Were there subliminal messages in their TV ads? Were they sending out instructions in tones only yellow-dog Austin voters could hear?

However it's happening, in the years I've covered City Hall, I've never seen this much polarization in a race between candidates who were this much alike. Indeed, it's hard for me to think of a matchup where the candidates were this much alike when it came to core values. (Since Clarke's supporters are probably rending their garments right now, let me say for the third time: We endorsed Margot! Vote for Margot!) But still, I could see more daylight between Wynn and Clare Barry, or Raul Alvarez and Rafael Quintanilla, than I can between McCracken and Clarke.

Plus, those 2000 matchups pitted candidates who were the obvious offspring of oft-opposed local constituencies -- Downtown vs. the neighborhoods, the chamber vs. the enviros. Even as the contenders tripped all over each other running to the middle, their supporters knew the difference. That's not nearly as true here; neither Brewster nor Margot has much of a history among the usual suspects. At times, it seems the Place 5 race is being fought purely on the surface distinctions. She's a woman. He's a yuppie. His wife had a Republican bridesmaid at their wedding. Even I, who have been accused of taking local politics way too seriously, think this is kinda funny.

Yet sides have clearly been chosen, no matter how arbitrarily, and Brewster vs. Margot has turned into another round of the war without end between the Austin political tribes. (Yes, tribes, plural. No city worth its salt should have just one. Mike Levy has already offered to be Austin's king; he can instead be one of its chiefs.) I can only conclude that -- as we've said over and over, it seems, for two years -- the citizens of Austin really want and need and deserve an honest debate over dramatically different visions of the city's future. Since no such debate has materialized naturally on recent council ballots, the city has had to invent one.

Austin at Large: Too Late to Turn Back Now?
The long, slow slog to a new I-35 could still change direction