Getting Sheared by Sager: It's On the (legal) Record

Travis Co. GOP boss Alan Sager gypped his Supercuts workers out of thousands of dollars -- no matter what he says now. 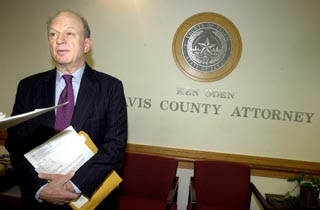 On May 7, Travis Co. District Judge Suzanne Covington awarded over $330,000 in attorneys fees, court costs, and interest to the plaintiffs' attorney in the case of Josephine Johnson et al. v. Rainbow Group, Ltd. et al. The plaintiffs were 13 haircutters employed at Austin-area Supercuts in the late Eighties and early Nineties; Rainbow Group Ltd. et al. is an investment group whose general partner is Alan Sager, since 2000 also the chairman of the Travis County Republican Party.

According to his somewhat dated resume posted on the TCRP's Web site, as of 2000 Sager was the second-largest Supercuts franchisee (with ownership in 20 franchises through Rainbow), the "general partner or president of seven other investment entities which own various numbers of Supercuts shops," and was managing "54 Supercuts franchises in three states and employing more than 500 people." (The precise numbers may be a little out of date, but suffice it to say the baldheaded Sager is a big man in haircuts.) He was Supercuts "Franchisee of the Year" in 1989, and in 1992 was named "Retailer of the Year" by the Austin Minority Business Association.

Those were good years for Sager, but apparently a little less rewarding for his employees. Nearly 13 years ago, Johnson and a dozen others -- with potentially hundreds more in the wings -- filed a class-action lawsuit against Sager and Rainbow for unfair treatment of his workers. Specifically, the suit charged that during the period covered by the lawsuit (February 1988 through July 1993), Supercuts management (i.e., Sager and Rainbow) persistently required employees to work "off the clock" -- that is, be on the premises waiting for customers or attending mandatory staff meetings, for no pay.

For eight years (thanks to numerous appeals by Rainbow) the lawsuit bounced back and forth between state and federal courts, but in July 2000, Covington ruled in favor of the employees on all counts, finding they had each worked anywhere from 60 to 960 unpaid hours, and awarding them, all together, nearly $60,000 in wages and interest. The employees finally got their checks in February. But it took until this month for the court to confirm the judgment for attorneys' fees and court costs. Rainbow and Sager will likely appeal Covington's judgment, and Austin attorney Ed Tuddenham -- one of those "greedy trial lawyers" you hear so much about -- has yet to receive a dime in fees for nearly 13 years of contingency work on the case.

If he lives long enough, Tuddenham and his clients may yet see some serious money. On June 11, the court will consider whether approximately 400 additional Supercuts employees -- at one time certified as a class but then decertified via Rainbow's appeals -- can be recertified in the same manner as the original 13 and have their claims heard for their unpaid time.

When we called Sager to ask about the case, he angrily described this "13-year-old nothing lawsuit" as "a personal vendetta by some liberals who are out to get me." "This guy [we presume he referred to Tuddenham] went out and looked for this lawsuit," Sager declared. "Just compare the amount awarded to the attorney's fees. This is sheer barratry," he repeated, "sheer barratry."

For our readers a trifle rusty on their legal lexicon, "barratry" is defined by Webster's as "the persistent incitement of litigation." Sager apparently believes Ed Tuddenham has spent the last 13 years suing him without remuneration -- off the clock, you might say -- just for his own amusement.

We say "apparently," because just at that point Sager announced that our conversation was "all off the record," and that we should talk instead to his attorney. We said we had indeed contacted his attorney, who hadn't yet responded, but that we couldn't accept Sager's going off the record retroactively -- something a public political figure might be expected to know. Sager responded, "If you print any of this, I'll deny I ever said it," and referred us again to his attorney.

We're still waiting to hear from her. Meanwhile, we spoke to Jennifer Casey, who worked for Supercuts for 16 months in 1990 and 1991, earning $5 an hour for 74 weeks. The court found that Casey had worked 385 hours -- more than nine and a half weeks, or almost 20% of that time -- for nothing. Casey recalls that when employees' complaints about unfair treatment were rejected by Supercuts managers, her friend Josephine Johnson (who died in 1994) contacted the Dept. of Labor to confirm that such practices were illegal. Later, reading a newspaper article about immigrant workers, Johnson ran across the name of a labor lawyer: Ed Tuddenham.

Casey says she still remembers one mandatory meeting led by Sager himself, who explained that the off-the-clock practice worked for the workers' benefit: "He said ... our performance would be judged by our productivity [haircuts per hour], so that if we clocked fewer hours it was better for us." Not all Sager's managers were so subtle, Casey says. "His second-in-command told us another time, 'If you don't like it, you don't have to work here.'"

Casey dismissed as groundless Sager's charges against Tuddenham. "This is a claim," said Jennifer Casey, "by employees who were treated very badly." She was happy to remain on the record.