The proposed Mexican-American Cultural Center may block fire access to the adjacent Villas on Town Lake. 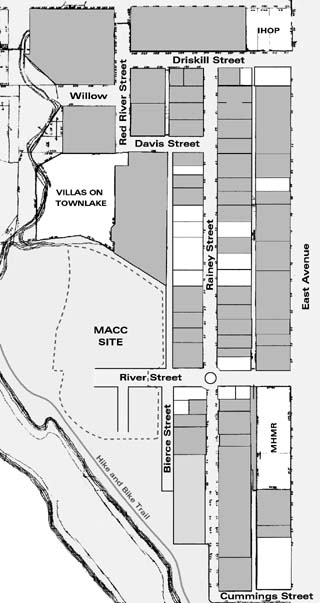 Chances are you've never noticed the Villas on Town Lake, a secluded condo complex situated on the waterfront at the end of Red River Street. Partially hidden by trees and lush landscaping, the four-story Villas offer views of the lake and the downtown skyline, quick access to the Town Lake hike-and-bike trail, and -- at least for now -- a bit of respite from the noisy bustle of the central business district. Some residents call the Villas "the best kept secret in the city."

City budget problems notwithstanding, Villas residents soon may have to give up much of their peace and quiet: The groundbreaking for the city's $45 million Mexican-American Cultural Center, an educational and arts facility proposed just yards away from their doorsteps, is scheduled for December. Despite the inevitable traffic and visitors the MACC will attract to their corner of downtown, many residents welcome the facility. What worries them is that the MACC's proposed parking garage, slated for the third and final stage of construction, will block the last remaining access point for fire trucks to reach the complex -- which, incidentally, features a wooden façade. "We have no guaranteed fire access," Villas resident Karin Richeson complains. "That's not very cool, when this place could burn down."

Villas residents alerted the city staff and the Austin Fire Dept. of their building's fire-access issues a couple of years ago, but no permanent solution has ever been found. For years, Richeson says, residents have believed they had an agreement from the city that a fire truck could pass through the MACC site, if needed. While they might be correct, the city has nothing on file to prove or disprove their claim -- including the Villas site plan, which city staffers say is missing from both municipal and county records. Currently fire trucks can reach the Villas from a private property to the east, but should the owners build something on that land, access would be gone. Villas residents have no agreement with the property owners to keep that access open, Richeson says.

AFD records indicate the Villas complex doesn't comply with the city's fire code. Currently fire trucks can't fit under the roof of the Villas' own parking garage, nor can they reach the Villas' western side, which is taken up by a segment of the hike-and-bike trail. Yet the building's developers surely had planned for the worst, Richeson asserts: "You wouldn't build a building this size and density and not have any fire access." On May 20, Richeson and others urged the Zoning and Platting Commission to postpone approval of one of the MACC's site plans until the Villas' fire-access issue is resolved. "If we can address this problem now prior to construction, it will save a lot of heartache on everyone's part," said Downtown Austin Neighborhood Association Vice-President Craig Nasso, who read a letter he co-wrote with Richeson that lists the Villas' fire access as their top MACC-related concern. "Common sense would say that access is needed." Though sympathetic, commissioners said they didn't have the authority to resolve the fire-access situation and approved the site plan, but nevertheless encouraged the residents to appeal their case to the City Council. Without a copy of the Villas site plan, however, making a solid case before council could be difficult, residents say.

"We don't have any leverage unless we find it," says Janet Gilles, who has lived at the Villas since 1986 (the complex was completed in 1983). She recalls viewing a copy of the site plan several years ago and noting two fire-access locations. Villas owners gave the city use of one of those spots for the hike-and-bike trail, she says, and AFD examined the site last year and concluded that a truck wouldn't fit there. As for the access point currently in dispute, Gilles claims city staff once affirmed it could be preserved wherever the MACC garage was built -- but like the Villas' site plan, records of that agreement also have disappeared.

Had the Villas been proposed today, it would have never passed planning review, says AFD Battalion Chief Don Smith. He claims that the Villas, not the city or the MACC, are responsible for remedying the fire issue. Smith has advised residents to install a standpipe system similar to those commonly found in high-rise buildings, to supplement firefighters' access. Citing lack of funds, Richeson says the city should cover the costs. "We shouldn't be required to do that at this point when we had fire-truck access," she says. The city could preserve the Villas' fire-access point via a formal agreement or by installing the parking garage underground, Richeson and other residents argue. But at the May 20 Z.A.P. meeting, Paul Medrano of the city's Public Works Dept. told commissioners those options would "handcuff" development of the MACC in terms of both planning and finances. Aware that his position frustrates Villas residents, Medrano, who serves as the MACC's project manager, says he left the meeting "feeling awful, like the bad guy. But I had to look out for the interest of the MACC."

Though the city's budget shortfall could delay MACC construction, Medrano says current projections call for an April 2005 opening for the estimated $8.5 million-$9 million Phase I -- including offices, classrooms, a plaza and multipurpose facility, and surface parking. Phase II calls for a 300-seat theatre and an additional, crescent-shaped building; Phase III, in addition to the controversial parking garage, includes an 800-seat theatre. The council-appointed MACC advisory board, charged with promoting the center to the community, will hold its first meeting this week.