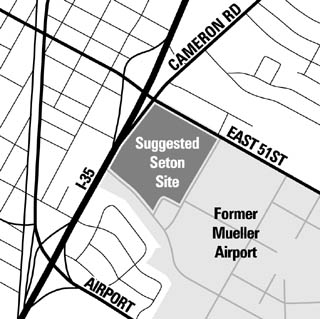 A 32-acre portion of the old Mueller Airport could be sold to Seton Healthcare Network within the next two weeks.

The wheels appear greased for the Seton Healthcare Network to take ownership of the city's treasured Children's Hospital, but -- surprise, surprise -- not everyone is as jubilant about the deal as the people who helped broker it.

A mood of near giddy enthusiasm prevailed at last week's City Council briefing on Seton's proposal to build a $175 million children's medical center at the old Mueller Airport site, replacing the overcrowded Children's near Downtown. A well-keyed presentation was coasting along rather smoothly until Mayor Pro Tem Jackie Goodman brought the proceedings back down to Earth with a party-pooping thud: "Why the insistence of ownership?" she asked, midway through the love fest. "Why not a partnership?"

Had this been a sitcom, we would have heard the satiric scratch of a phonograph needle sliding across a record. Goodman pressed on. She wondered why it was necessary for Seton to own the property -- part of some prized city-owned real estate slated for redevelopment -- and to what extent Seton would cooperate with a citizens oversight board in order to "keep people serving on the board instead of walking away because they can't get information."

When she finished, Assistant City Manager John Stephens had no ready answers, but he assured Goodman that all her questions would be answered in writing. City Manager Toby Futrell chimed in that it would be good to post a series of related questions and answers on the city's Web site. (Documents related to the Seton deal, including the proposed amended lease and Seton's financial analysis, are posted at www.ci.austin.tx.us/news/2003/seton.htm.)

Questions? Travis Co. Probate Judge Guy Herman has plenty. Contacted after the meeting, Herman reiterated his opposition to relinquishing public control of the profitable children's facility, which Seton leases and manages along with the city's Brackenridge Hospital. Herman is especially critical of the wham-bam rush to rezone the property, amend the city's existing lease agreement, and approve the sale of the property -- all by June 12, the council's last meeting before taking a monthlong breather prior to tackling the budget. (A complex set of legal arrangements would call for the city to sell the 32-acre property to Catellus Commercial Development Corp., currently negotiating with the city to take over as master developer of the Mueller project. Catellus in turn would sell the site to Seton.)

Seton insists time is of the essence -- it hopes to have the new hospital's doors opened by 2007. But Herman views the short-term public process as a deliberate maneuver to avoid a custody battle with a proposed health care district, which would automatically assume control of the city and county medical facilities. That would, of course, include Children's Hospital -- if Seton doesn't get there first.

Herman is one of the county's most ardent proponents of a publicly financed health care district, and he wants the ballot question to go before voters in a November election, regardless of whether the Legislature approves a pending bill to enable a district customized to Austin and Travis Co.'s needs. (While existing state law allows for hospital districts -- and all of Texas' largest urban counties already have them -- Austin is the only city that owns the major public health care facility in its area, hence the desire for special legislation for Central Texas.) Herman has already collected enough signatures to force the county to hold a hospital-district vote. "Why the rush to judgment?" he asked. "Why not wait and let the hospital district deal with it?"

Herman proposes adding a second item to that November ballot -- a bond measure seeking a two-cent tax increase to finance construction of a new children's hospital. "After reviewing recent polling information and seeing the results of the Austin Community College bond election, I am confident that this community would be more than willing to build a new children's hospital," he said. "Then Ascension Health [Seton's owner] wouldn't have to spend their money. They could do what they do best -- manage the hospital under the existing lease."

Herman's strong resistance and Goodman's seeming reluctance to immediately get behind the project may require Seton and the city to redouble their PR efforts to seal the deal on a happy note. Even with the upbeat mood at last week's meeting, it may be too early to determine if the proposal has four out of seven council votes. Early indications point to yes. Mayor Gus Garcia, Mayor-elect Will Wynn, and most of the council members offered favorable comments but no firm commitment. Council Member Daryl Slusher allowed that, while he still has questions about the specifics, the proposal itself looks promising. "It appears to me that we've worked out an agreement that's going to benefit the community overall ... and at a very good location. So I think this is going to work," he said.

The proposal lays out a number of terms and conditions, suggesting that Futrell got much of what she said she wanted when the city entered negotiations about six months ago. They include:

• extension of the Brackenridge lease to 60 years,

• Seton's investment of $50 million in capital expenditures at Brack over the next 20 years,

• a $50 million penalty against either party if it breaks the contract,

• transfer of the lease to the health care district if it's created.

Within the next week or so, Seton will ratchet up its sales pitch with a report distributed to 2,000 community stakeholders and mailed to 150,000 targeted households.

The proposed Children's deal requires the City Council to approve an amended lease with Seton and to rezone a chunk of the Mueller site for the new facility -- all in three weeks.

May 13: Staff filed an application for a zoning change of the proposed Children's Hospital site from aviation to Planned Unit Development.

May 28: Case goes before Planning Commission