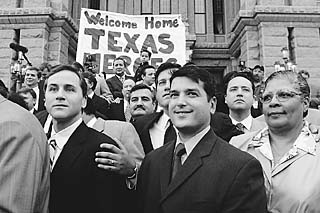 After shutting down the state House for a week by leaving the state and thus denying a quorum, the renegade Texas Democrats returned to Austin to a hero's welcome Friday morning. A few hundred of the party faithful were waiting to greet them at 7am. Unfortunately, we're damned if they do, and we're damned if they don't: The boycott killed Tom DeLay's appalling redistricting bill, but getting the House back in session meant Republicans could resume their march to dismantle Texas' social safety net and give comfort to the rich. (See p.16 and "Capitol Chronicle," p.14) (Photo By Jana Birchum)

Quote of the Week: "We wish the work had been perfect, but [our] misjudgments and mistake did not materially affect our conclusions." -- Statesman Managing Editor Fred Zipp, in the closest the daily is likely to come to a retraction of its controversial and widely criticized Barton Springs coverage. See Daily Cops to Springs Sins.

Life went on -- for good or ill -- at the state Capitol after the return of the Killer D's. See Killer D's Come Home and Capitol Chronicle.

Budget news just gets worse for both the city (see Austin at Large) and the state (see Beyond City Limits) -- City Manager Toby Futrell says it's nearly impossible to balance Austin's books without major tax increases, and Comptroller Carole Keeton Strayhorn has called for a cigarette tax to help divert the Texas red-ink flood.

City Council approved a massive tax-rebate package for the Domain project in North Austin (see Wal-Mart or No, Council Defers to Endeavor's Domain). This week's meeting should be dominated by returning issues like the smoking ordinance, superduplexes, and neighborhood-plan amendments.

While hospital-district legislation may not be dead yet, the city and Seton Healthcare Network are moving forward with plans for a new children's hospital at the old airport. More on this next week.