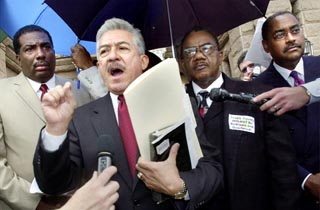 Quote of the Week: "Sometimes your work is passing legislation; sometimes, your work is making sure that it stops." -- Rep. Garnet Coleman, D-Houston, speaking from the Killer D Home Office in beautiful Ardmore, Okla.

While Republicans fumed and sulked, the 51 Killer D's brought the Capitol to a halt by flying north to Oklahoma, killing the quorum, and -- they hope -- putting a stake through the heart of U.S. House Majority Leader Tom DeLay's cowardly and sleazy effort to steal, through redistricting, congressional seats the GOP was unable to win fair and square at the polls. See "Capitol Chronicle."

Oh, no! Not another high ranking for Austin on a "Best Cities" list! Sadly, it is true. See "Austin Stories".

After officially declaring Will Wynn the mayor-elect, an obviously reluctant City Council last week gave preliminary approval to Mayor Gus Garcia's anti-smoking ordinance (see p.16) but postponed until this week a final decision on incentives for the Domain (see "Austin Stories"). The council also moved forward on superduplexes (see "Austin Stories") and finally (after several years) completed rezonings of industrial property -- including Balcones Recycling -- in the Holly Neighborhood Plan but still couldn't finalize an ordinance to govern the neighborhood-plan amendment process. More on that next week.

Early voting begins Wednesday, May 21, for the Place 5 run-off between Margot Clarke and Brewster McCracken (see "Place 5 'Up for Grabs' as Clarke, McCracken Square Off").

Amid Chaos and Crisis, the 87th Texas Legislature Gets to Work
Can we rebuild a democracy?