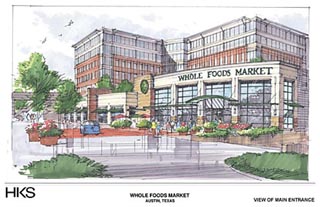 Tensions between BookPeople and Schlosser Development Corp. seem to have simmered down since national chainsters Borders Books and Music dropped out of Schlosser's Sixth + Lamar office and retail development a few weeks ago. BookPeople owner Steve Bercu says the developer is making concerted efforts to keep him updated about its proposed four-block development, which currently has no committed retail tenants other than Whole Foods Market. Bercu and nearby Waterloo Records strongly opposed the inclusion of Borders, which an economic report commissioned by the nonprofit group Liveable City showed would attract business away from their stores.

While the dust has settled, the dirt remains untouched: Schlosser had hoped to break ground in late April on its project, including a new Whole Foods corporate headquarters and flagship store across Sixth Street from their current location. But a cursory look at the vacant site shows no signs of bulldozers, piles of building materials, or other signs of construction activity. Calls to Schlosser Development weren't returned.

"I haven't seen anything [happen]," says Bercu, who supports the Whole Foods project. Schlosser, he adds, hasn't yet exercised its option to buy the building that BookPeople currently shares with Whole Foods, which would make the developer his landlord. "I was told by Schlosser as soon as they get signed leases that they'll let us know," Bercu said. "They've had enough bad luck talking about who they might have; they probably want to wait until they have the leases."

In other news, City Hall still hasn't decided whether to reauthorize what's left of the $2.1 million in Smart Growth incentives awarded to the previous incarnation of Sixth + Lamar, of which Schlosser has already spent $700,000. The latest version of Sixth + Lamar scored lower on the city's Smart Growth Matrix than the developer had originally hoped, says George Adams of the city's Transportation, Planning, and Sustainability Dept.

Council Member Betty Dunkerley says the city has been working jointly with Schlosser and Whole Foods on finalizing the incentive deal and is waiting for Whole Foods executives to make a decision. "We're ready to move at any time," she said. She denied rumors that the Domain, a mixed-retail project planned in North Austin by Endeavor Real Estate Group (see p.11), which might receive $25 million in tax rebates before Sixth + Lamar gets anymore public assistance, has moved ahead of Whole Foods in some kind of incentive queue. "Nothing could have moved ahead of Whole Foods," Dunkerley said. The City Council is scheduled to vote today (Thursday) on the Domain package.