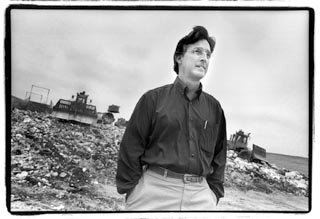 After more than five years of litigation culminating in a monthlong battle in the courtroom of District Judge Paul Davis, last week a jury ruled that multinational trash titan Waste Management Inc. had defamed its locally owned competitor, Texas Disposal Systems Landfill Inc., in an "action alert" distributed in January 1997 to Austin environmental leaders and city officials, among others. But the jury awarded no monetary damages to TDSL as part of its verdict, which Waste Management counsel Chip Babcock says makes the case a "win" for his client. Meanwhile, TDSL president and CEO Bob Gregory says the jury's decision provided "vindication" that WMI unfairly disparaged his company's 1,200-acre southeast Travis Co. landfill, which has gained favor with many local environmentalists for its composting and recycling facilities and exotic-game ranch.

"The disagreement TDSL has with [WMI] is based upon vastly different business philosophies," said Gregory. "It is a David and Goliath story." But vindication doesn't pay the attorneys' fees, prompting TDSL to consider an appeal. A higher court might allow evidence involving antitrust issues, tortious interference, and other related claims contained in TDSL's original case, which strengthened the company's original request for damages, say Gregory and his attorneys.

TDSL filed its lawsuit against WMI in October 1997, in the midst of heavy competition between the companies for lucrative disposal contracts offered by the cities of Austin and San Antonio. TDSL eventually won both contracts but said in its lawsuit that harmful actions taken by WMI during those negotiations cost TDSL millions of dollars and jeopardized its standing among public officials in both cities and among Austin's environmental community. A number of pretrial rulings and summary judgments sought by the defense eventually narrowed the focus of the trial to the contents of WMI's one-page "action alert." Attorneys David Donaldson and Jim Hemphill (of George & Donaldson, L.L.P.), representing TDSL, were prevented from introducing evidence regarding WMI's checkered environmental and financial history, details of recurring problems at WMI's northeast Travis Co. landfill, or insight into the competition between the two companies. "The full story of what went on between TDSL and Waste Management is bigger than the action alert," says Hemphill.

Written by local PR consultant Don Martin in January 1997, the action alert suggested that environmental controls at TDSL's landfill were inferior to those at other facilities in Central and South Texas, including those owned by WMI. It also stressed that TDSL would be accepting more San Antonio trash under its new contract with that city; phone numbers for San Antonio officials, including the mayor and City Council, appeared at the bottom of the alert. At the time, Martin was a paid consultant for WMI; his alert did not mention by name either WMI or its local facility, Austin Community Landfill.

TDSL's lawyers had to prove not only that Martin's claims were false, but that WMI knew or suspected the alert was false and distributed it anyway to inflict harm on its local competitor. To support its claim for monetary damages, TDSL called as witnesses several prominent Austin green leaders -- including former City Council Member Brigid Shea, environmental engineer Lauren Ross, and Hill Country Conservancy Director George Cofer. All testified that Martin's action alert negatively affected their opinions of TDSL -- that is, until they sought additional information. Cofer said the alert raised concerns that TDSL's operations would threaten air and water quality and was alarmed by suggestions that an "unspecified" amount of San Antonio trash would soon be entering Travis Co. "It seems in my mind to imply that that would be a bad thing," Cofer testified.

It was Cofer who unknowingly got the ball rolling on the case six years ago. On Jan. 30, 1997, he faxed the action alert -- at Martin's suggestion -- to about 60 environmentalists, eco-conscious businesses, journalists, and public officials on his personal fax list. Then, almost immediately after sending out the alert, Cofer consulted with two members of the city Solid Waste Advisory Commission who cast TDSL's environmental practices in a favorable light. He also talked to Gregory, who wrote up a statement that Cofer faxed out with his own apology for disseminating possibly inaccurate information. But doubts about TDSL lingered in his mind, he testified, until he toured the facility and reviewed research that Ross had conducted on the two landfills.

Those doubts weren't enough to inspire Cofer, or anyone else, to organize a protest, write a letter to the editor, or take any other adverse action directly against TDSL, argued Babcock on behalf of WMI. More importantly, the alert didn't persuade the city councils of Austin or San Antonio to deny TDSL their business. Babcock, a top-notch First Amendment lawyer -- he defended Oprah Winfrey when the daytime diva was sued by Texas beef producers -- deftly zeroed in on TDSL's lack of specific evidence to back up its claim for damages. In the end, the jury wasn't convinced that Martin's action alert, however misleading or false, had affected TDSL's bottom line. "You can't punish this kind of speech with an award of monetary damages," Babcock told the Chronicle after the trial. "If you do that, then people will be reticent to speak in the future. The next time, it may be some public servant -- or a small environmental group that issues a one-page action alert."

The jury's decision to not punish Waste Management monetarily could encourage the company to send out future "action alerts," or engage in unfair business practices, Gregory asserts. Nevertheless, he's anxious to use the trial findings to TDSL's advantage -- including in the public. "Let the debates begin," he said.