Place 5 'Up for Grabs' as Clarke, McCracken Square Off 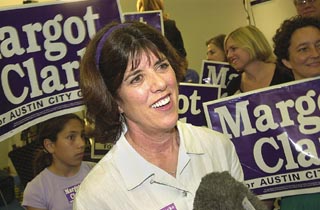 Before the May 3 election, a slew of local pundits voluntarily -- and accurately -- predicted that voters would send Brewster McCracken and Margot Clarke into a run-off for the Place 5 seat on the Austin City Council. But crystal-ball gazing the final outcome of this matchup is an altogether different story. (The run-off will be held Saturday, June 7; early voting begins Wednesday, May 21.)

"It's up for grabs, really," says veteran campaign consultant Pat Crow, who is not involved in either campaign. "Run-offs can be so unpredictable, particularly when you have two candidates who have not been terribly public people in Austin."

Conventional wisdom would have McCracken winning, because he has the most money and he took the most votes in the first round, by 43.5% to 35.3%. But, says Crow, "Women are really feeling under siege right now -- not only by what's going on at the Legislature but what's happening nationally. And they may feel more comfortable voting for a woman who's going to back them on all the right issues."

This is where McCracken must show that he's just as strong on women's issues; he has enlisted several high-profile women, like former Gov. Ann Richards, to back him up on that score. "I think philosophically that Brewster and Margot are really damn close on most issues," Crow says. "Brewster has the support of some very strong women, and he needs to get that message out."

That's not to say that this race will turn solely on gender, but the gender factor does appear to be registering strong among female voters, given the right-wing bent of the state's GOP majority. So McCracken, a Democrat who freely acknowledges that he is often mistaken for a Republican because he looks like a Republican, must work extra hard to appeal to the people who typically vote in run-offs -- liberal Central Austinites. As it happens, most of these voters are part of Clarke's crowd. She took 16 precincts in the core (although McCracken didn't do too shabby in these parts) with more than 50% of the vote in the first round, which featured seven Place 5 candidates. Meanwhile, McCracken cleaned up in Northwest and Southwest.

Another quirky thing about run-offs is that voters who backed one of the two candidates in the primary may opt for the other in the run-off, Crow points out. "We saw that when Raul Alvarez ran against Rafael Quintanilla," in the 2000 council election. In the final round, the Alvarez camp put shoe-leather politics to the test and overcame Quintanilla's lead going into the run-off, winning a council seat by 201 votes.

In the McCracken-Clarke race, says Crow, "It's going to come down to who does the best job of turning out the vote -- not just with TV or direct mail, but with direct, personal contact. That's what makes the difference." Both McCracken and Clarke are hitting the campaign trail anew and getting busy with fundraising efforts. Candidates are allowed to solicit new $100-a-person contributions for a run-off. According to their last campaign finance reports before the election, McCracken should still have a few thousand dollars left over, but Clarke is already in the red, having loaned her own campaign $20,000. A group of "Go, Margot, Go!" women will host a Clarke fundraiser ($15 a pop) from 6:30pm to 8:30pm Wednesday, May 21, at the Lazy Oak Inn, 211 W. Live Oak in South Austin. McCracken is also planning a fundraising event for next week; details were still being hashed out at press time. Check www.brewstermccracken.com for the latest information.)

Interestingly, both candidates in recent weeks have moved renewable energy to the forefront of their campaigns, perhaps timed to coincide with next week's wind-power conference (see p.18). Here's what they have to say on that and other current issues:

Austin Chronicle: Most City Council members build their reputations on a particular pet project. On what project or issue would you like to distinguish yourself on the council?

Margot Clarke: The environment is always going to have a high priority with me, but that's hardly a pet project. A project that I'd like to be involved with would be the creation of environmentally based businesses in Austin. Everything from trying to make Austin the renewable-energy center that so many candidates seem interested in, on down to [local activist] Paul Robbins' excellent suggestions of the types of environmentally oriented business ventures that would do well here while contributing to Austin's economic revitalization.

Brewster McCracken: There are two projects that I'm interested in. The first is the expanding use of renewable energy, particularly wind power. I would like Austin Energy to become the leading wind-power utility in the nation. The second is the Waller Creek Tunnel project and revitalizing the eastern half of Downtown.

AC: Where do you stand on the proposed smoking ordinance?

Clarke: I do favor a stronger smoking ordinance. But when we have local club owners holding on by their fingernails, I think it's going to be a very hard sell. I don't think pushing it through at this time is the best approach.

AC: Wal-Mart wants to build a new store in the recharge zone of the Edwards Aquifer. The property is already zoned, so it's possible this issue may never reach the City Council. How would you respond to this type of development?

Clarke: I would try to be as helpful as possible to try to figure out if there wasn't some way to prevent it from happening.

McCracken: One of the things that political leadership does is create an environment of making sure that people do the responsible thing. This is the wrong kind of development in that location. I'm not opposed to Wal-Mart. I'm opposed to Wal-Mart over the aquifer.

AC: What sets you apart from your opponent?

Clarke: My background -- not only as a longtime Austin resident and having grown up here, but also my professional background. I've worked in the high tech industry, and I've worked on public policy issues with nonprofits. And I have lobbied the Legislature on public policy issues. I've been taking positions on policy issues for years, professionally and personally -- everything from abortion to Stratus to Seton and Brackenridge to way back to the days of the Freeport-McMoRan [now Stratus Properties] development controversy. I've stayed consistent on all of my positions.

McCracken: It's important that political leadership brings a broad range of people into the dialogue, particularly from throughout the region. I think I've shown that I can win support from all over the city, and I'm proud of the broad range of support that I got in the first round. I think it's a reflection of how hard I worked in every part of the city. I am just as strong on the environment and women's issues as Margot. I believe I'm also strong on issues relating to jobs and our budget.