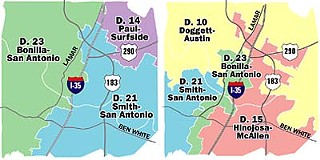 The latest GOP version, proposed by Rep. Phil King with offstage help from U.S. House Majority Leader Tom DeLay (right), redraws Dist. 10 into a heavily GOP sprawl stretching from Lakeway to Houston to Port Aransas. King's map splits Austin's core four ways; it would give Clarksville to Smith, Hyde Park and Travis Heights to Bonilla, and Rosewood and Windsor Park to McAllen Democrat Ruben Hinojosa, but leave Rosedale and Crestview in Dist. 10. A walk from Pease Park to BookPeople to Katz's to the Four Seasons would take you through all four districts.

In case you hadn't figured it out, the whole GOP re-redistricting effort is based on a fallacy: that the current congressional map is shamefully gerrymandered in the Dems' favor, and if it weren't, Republicans would hold not 15, but 19 or 20 or 21 of the state's U.S. House seats, just as the GOP holds 19 of the 31 seats in the Texas Senate. To hear U.S House Majority Leader Tom DeLay or his allies talk, what they want is proportional representation, à la the Israeli Knesset -- the GOP got 57% of the statewide vote in 2002, so it should have 57% of the congressional seats. This same logic would entitle the Libertarians and the Greens to one seat each. Well, the Libs already have nominal Republican (and former Lib presidential candidate) Ron Paul. The Greens can perhaps choose between Lloyd Doggett and Sheila Jackson Lee.

But the gerrymandering argument is a canard that can be dispelled in about 10 minutes -- as U.S. Rep. Max Sandlin, D-Marshall, patiently attempted to do in his testimony, in terms even the Redistricting Committee could understand. If each current district elected its member of Congress based on its party preference in November 2002, the GOP would have a 20-12 majority. Instead, six Democrats -- Sandlin, Jim Turner (Crockett), Ralph Hall (Rockwall), Nick Lampson (Beaumont), Chet Edwards (Waco), and Charlie Stenholm (Abilene) -- won re-election in heavily GOP districts. Only one GOP rep, San Antonio's Henry Bonilla, won in an otherwise Democratic district -- and Bonilla's was the closest of any 2002 Texas congressional race.

Bonilla is also the only GOP rep from a current majority-minority district; 10 Democrats represent such districts, but three of the 10 -- Houston's Chris Bell and Gene Green and DeLay nemesis Martin Frost of Dallas -- are Anglos. This is perfectly OK under the federal Voting Rights Act -- which is designed to guarantee minority voters' right to choose, not minority candidates' right to hold office -- but DeLay has railed for years now about the Dems packing minorities into white districts to keep them Democratic. (Frost, who's been in the House for 24 years, represents a district that's more than 60% black and Hispanic.) Creating new majority-minority districts -- particularly ones that could appeal to key state senators like Brownsville's Eddie Lucio -- has been an explicit goal of the re-redistricting campaign.

Crabb's initial map was organized on one principle only -- removing Dem incumbents from their districts. The map left eight districts vacant, including Doggett's District 10, which stretched from Llano to Midland without including any of Travis Co.; Austin would be carved between Bonilla, Paul, and Lamar Smith, who already represents the county's western reaches. Hall, Doggett, Edwards, Stenholm, Bell, and Green would all be politically homeless, as would Corpus Christi's Solomon Ortiz -- paired with his neighbor, McAllen's Ruben Hinojosa, to leave a district including Brownsville vacant for you know who. To his credit, Lucio has so far refused to take the bait. (Crabb's map also paired Dallas GOP Reps. Pete Sessions and Jeb Hensarling -- Sessions having just moved last year into the vacant District 32 from his old District 5, now held by Hensarling.) Frost's district would become overwhelmingly GOP, with all his Metroplex minorities moved into a new District 4; Bonilla's district would become overwhelmingly white, with most of his West Texas counties relocated into a vacant seat to tempt state Sens. Frank Madla (whose district likewise stretches from San Antonio to El Paso) or Judith Zaffirini of Laredo. The Crabb map would leave 21 districts with solid GOP leanings and 11 majority-minority districts.

But even before Crabb's ink was dry, DeLay announced that the chairman's map didn't do enough to elevate Republicans or minorities to Congress; his backroom contribution, carried by Phil King, contains more subtle and detailed instances of white-Dem abuse. Look no further than Central Austin, which in King's map is split four ways: A trip from Pease Park to BookPeople to Katz's to the Four Seasons will take you through all four of them. Doggett, who lives near Pease Park, technically remains in his district -- but District 10 would now stretch from Lago Vista to Northwest Houston and down to Port Aransas and be basically unwinnable by any Democrat, let alone an anti-war progressive.

In King's map, Doggett would become one of 10 reps whose districts include part of Harris Co., another crafty way to carve up what are now solid Dem communities of interest. The 10 would include Lampson, whose district would include Port Arthur but not his home in Beaumont. (Just as Hinojosa would represent East Austin and McAllen but not the rest of Hidalgo Co.) Chris Bell would not be among those Harris reps; his District 25 would become a new Corpus-to-Brownsville district, again designed as Lucio bait. And Frost would still see his district turned into Suburban Paradise -- even more so after King's last-minute tweak to keep Arlington in one piece, as demanded by his Redistricting Committee colleague Kent Grusendorf. Purely on party performance, King's map would give the GOP a whopping 22-10 majority, which is a lot more than 57%, but -- despite DeLay's claims of solidarity with people of color -- only 10 minority districts, one fewer than present.