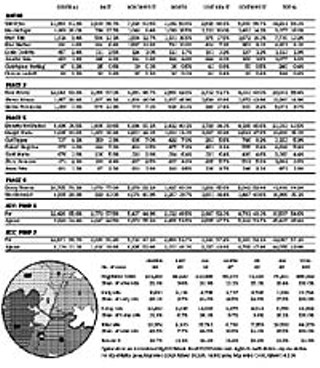 Check out our election charts

We suggested two weeks ago that, if Austin voters did as they've done since 1993, Will Wynn would become Austin's next mayor. They did, and he is, though the results do include interesting wrinkles, perhaps spawned by the massive influx of ACC students into the early-voting rolls. Here's the skinny:

Turnout: Overall turnout for the combined ACC and city ballots was 13.8%. Turnout for each individual contest was just above 14%. About 8,000 citizens only voted in one contest. (The ACC district includes the Manor and Leander ISDs but not the Round Rock or Pflugerville ISDs, which straddle the Austin city limits.) As in 2002, when overall turnout was just 9%, Central turnout was by far the highest in town -- signs of a permanent shift from past electoral patterns, where the Northwest and Southwest equaled or exceeded Central turnout rates. This time, the suburbs came in right about average, and as usual the North, East, and Southeast sectors brought up the rear -- although East turnout saw a remarkable jump, in relative terms, from 2002.

Central early-vote turnout likewise well outpaced other regions, perhaps putting paid for good the time-honored tradition that the early vote is more conservative. The overall early vote was three times higher than in 2002; on the Eastside, it was six times higher. These totals were helped along by ACC students; the college's campuses accounted for nearly one-fourth of all early votes cast. They're probably responsible for the ACC tax package's doing noticeably better in the early vote than it did on E-Day.

Mayor: Run-off, you say? Out of 180 boxes, Will Wynn took 126 with more than 50% of the vote, and 20 with more than two-thirds of the vote. The latter included Central and Northwest power boxes like 239 (Gullett Elementary), which saw 32.7% turnout and gave Wynn 68.6% of its vote, and 237 (Highland Park Baptist Church), with 37% turnout and a 75.5% showing for Wynn. The combination proved lethal to the challengers. Brad Meltzer's best showings -- from 15% to 27% -- were in boxes with half the turnout of Wynn's strongholds, mostly in the Northwest. Likewise Katz, whose best results -- from 20% to 35% -- were largely south of the river, where Nofziger also did better than his citywide average. (Although Katz's best box was 333, Canyon Creek Elementary, in the far Northwest.) The combo of Katz and Nofziger south of Ben White is what kept Wynn below 50% in the Southeast, but Nofziger's best boxes -- between 25% and 35% -- were largely in Central Austin. However, even in his own south-side stomping grounds Nofziger was unable to restrain Wynn enough to make a difference. Witness box 422 (Travis Heights Elementary), where Max got 35% and Wynn 52%.

Place 5: Who's backin' McCracken? As was the case last year, Brewster's support is strongest in the Northwest -- he won 20 of the 28 city boxes in the sector (four boxes are ACC-only) with more than 50% of the vote. (He topped 50% in only 10 other boxes in town.) Margot Clarke won 16 precincts outright -- all in Central, including power boxes like Hyde Park (her best, at 65.8%), Clarksville, Travis Heights, and Zilker. Of course, Brewster did better in Margot's back yard than the other way around, which is why he's eight points ahead going into the run-off. But given the Central turnout advantage, this is clearly still a race. The two fought to a near-draw in the East and Southeast; McCracken held a substantial advantage in the North and Southwest. But those two sectors, (along with the Southeast) also saw the other candidates get their best results. Robert Singleton, who did surprisingly well in all three places (do they know who Robert Singleton is?), has already enthusiastically endorsed Clarke, and Carl Tepper came close on e-night to doing likewise; Scott Marks and Steve Swanson would also seem as likely to back Clarke as McCracken.

Place 2: The numbers tell a tale that would be less surprising if Raul Alvarez weren't Hispanic and if Steve Adams had spent more than $100 on his campaign. Geographically speaking, these results look like council campaigns of the mid-1990s, with an overwhelming Central showing by Alvarez offsetting weakness elsewhere. But for an incumbent to actually lose anywhere, even in the swing-voting North, to a candidate written off as token opposition is startling. Though it's easy to blame ethnicity, Adams did well enough in the largely non-Anglo East and Southeast to suspect something else is afoot, like opposition to Alvarez's solo stance against the Stratus deal. Unsurprisingly, Adams did best -- beating Alvarez by margins of as much as 2-to-1 -- in North, Northwest, and Southwest boxes (like Katz, he did best at Canyon Creek, with 64.5% of the vote). But with Alvarez pulling nearly 85% in Hyde Park and like results across the urban core, Adams' advantage was easy to overcome. As for Gavino Fernandez, as expected he did best in his Eastside neighborhood -- but "best" still meant getting trounced by Alvarez by more than 2-to-1 in Fernandez's own home precinct (439, Zavala Elementary), despite Fernandez's campaign-long questioning of Alvarez's barrio credentials.

Place 6: Same story as Place 2, although with only two candidates, Wes Benedict ended up being more a curiosity than a threat to Danny Thomas. (Remember, in a two-person Austin ISD race in 1998, Jennifer Gale got 40% of the vote.) Benedict only won three boxes -- two in the Northwest, one in the Southwest -- though he kept Thomas below 60% in 49 boxes, primarily North and West but located in every sector except (naturally) East. Interestingly, nearly 10,000 fewer people voted in Place 6 than in the mayor's race.

ACC Props. 1 and 2: Again, a 2-to-1 rampage in Central all but ensured victory for the ACC package -- Prop. 1 (the tax cap hike) only lost in one of the 44 Central boxes, and even there pulled 46%. The measure likewise won in 16 of 20 East boxes, but did less well in the Southeast and typically badly elsewhere -- although given the climate, for a tax increase to only lose in the North and Southwest by three points is a remarkable show of strength.