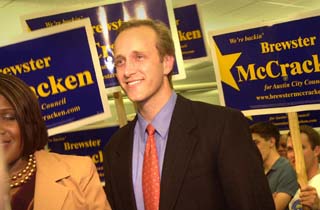 Brewster McCracken's second run for City Council saw him edge ever closer to winning -- his 44% in the Place 5 race marked an improvement over the 26% he garnered in last year's Place 4 race. He'll face Margot Clarke in the June 7 run-off. (Photo By John Anderson)

Shortly after 10pm Saturday, Margot Clarke extended a handshake to Brewster McCracken, the top vote-getter in the hard-fought Place 5 race. Although in second place, Clarke looked a tad more exuberant; she had just dashed McCracken's chances of an outright victory in the seven-candidate contest to succeed Mayor-elect Will Wynn. Now the two will square off in a June 7 run-off. Throughout the evening, McCracken maintained a comfortable lead over Clarke, finishing with 23,303 votes to her 18,908.

Despite being far behind Brewster McCracken in funding, Margot Clarke made a strong showing to qualify for the June 7 run-off, capturing 35% of Saturday's vote. (Photo By John Anderson)

Flanked by family and supporters, McCracken acknowledged his disappointment in failing to hit the 50% mark, but said the final tally didn't surprise him. "We started planning for a run-off in February," he said. "We knew it was going to be close, and we knew it was going to be Margot in the run-off." Clarke, for her part, said she was "surprised and gratified" by the returns. "I wanted to be in a run-off, but I really didn't know what to expect," she said.

Both candidates plan to continue their campaign strategies -- door-knocking, block-walking, and phone-calling, along with seeking the support of high-profile Austinites. McCracken's last mailer featured an endorsement from former Gov. Ann Richards, while local icon and writer Liz Carpenter lent her voice to a pro-Clarke phone blitz the day before the election.

Of the other candidates, city Urban Transportation Commissioner Carl Tepper had hoped to secure a run-off spot, but placed a distant third with just under 6%, and said the race gave him a new understanding of the power of fundraising. Tepper cheerfully hugged Clarke at evening's end but stopped short of an endorsement. Activist Robert Singleton, on the other hand, who finished fourth with more than 5% of the vote, wasted no time slapping a Clarke campaign sticker on his shirt. He also said he would start preparing now for another run in 2005 -- for the Place 1 seat now held by Daryl Slusher.

With little time to raise the cash needed for the second lap, McCracken and Clarke hit the trail anew this week -- with hands outstretched. The next few weeks may be a far cry from the cordial, genteel race just past. A few days before the election, McCracken -- who out-raised Clarke by more than $112,000 and outspent her by nearly $75,000 -- chided his opponent for having loaned herself $20,000 for the campaign. In an e-mail to residents in the Heritage neighborhood, McCracken referred to Clarke as a "millionaire trust-fund recipient," a charge the former nonprofit director brushed off with a wave of her hand. McCracken backtracked from that assessment on election night but likewise dismissed assertions that he's a "deep-pocketed candidate." "I live month-to-month like everyone else," he said. That may be just a sample of things to come.