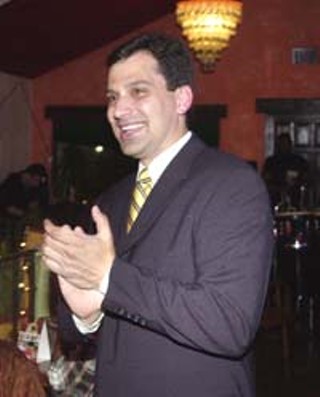 Place 2 incumbent Raul Alvarez easily won re-election Saturday -- his 55% of the vote was well ahead of Steven Adams' 35% and Gavino Fernandez's 10%. (Photo By John Anderson)

Is Austin really one-third Libertarian? No, but Saturday's election shows that many voters will support conservatives -- even if they would end up with an all-white City Council to represent a city that is one-third Hispanic and 10% African-American. Right-leaning voters, particularly in North and Northwest Austin, turned out impressive numbers for Place 2 Libertarian candidate Steve Adams, who filed at the last minute to challenge Raul Alvarez, and fellow Lib Wes Benedict, who ran in Place 6 against Danny Thomas. A victory for either candidate would have upset the traditional, if often controversial, "gentlemen's agreement" that reserves council seats for African-American and Hispanic candidates. Though the incumbents won re-election with 55% and 65% respectively, the Anglo-Libertarians' performance at the ballot boxes made GOP legislators' references to the "People's Republic of Travis County" seem so 1990.

Adams and Benedict ran as minority candidates -- in terms of political ideology -- with similar platforms opposing light rail and tax incentives and subsidies for big business. Neither did much fundraising, particularly Adams, who raised and spent just $100. Alvarez campaign manager Frederick Lopez noted that "in the areas where [Alvarez] lost, it's not like he lost by an overwhelming conservative vote." Adams did beat Alvarez in 18 boxes by more than 10 points, but the incumbent walloped Adams in the central city, pulling as much as 88% in some boxes. Thomas, who says he ran his campaign as if he faced seven candidates, was "surprised" by his opponent's high returns. (In his race against Travis Co. Commissioner Margaret Gómez last year, Benedict got 4.6% of the vote.)

Meanwhile, East Austin neighborhood activist Gavino Fernandez, challenging Alvarez for supremacy in the barrio, saw his campaign fizzle. Fernandez lost his own precinct two-to-one to Alvarez and nearby boxes by even higher margins. "There was nothing he said that Raul wasn't already saying," claimed Lopez.